The aftermath of the July 15 attempted coup has produced the most serious crisis and erosion the Turkish state has ever seen. 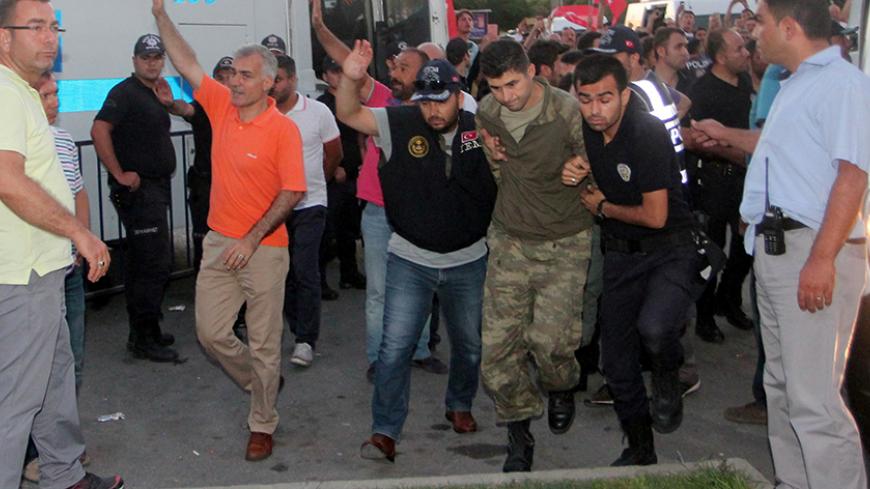 Soldiers suspected of being involved in the coup attempt are escorted by policemen as they arrive at a courthouse in the resort town of Marmaris, Turkey, July 17, 2016. - REUTERS/Kenan Gurbuz

The July 15 attempted coup has created a plethora of problems in Turkey. Purging the Gulenists, who entrenched themselves secretly in the state over four decades, taking hold of critical posts and eventually attempting a military coup, has been the No. 1 agenda item for the country’s democracy and politics in the past three months.

The erosion of state institutions, especially the military, the existence of a secret organization capable of attempting a coup, elements that remain potentially uncovered and the risks they pose to the rule of law made the purge an absolute necessity.

No doubt, the question of how the cleansing should be conducted and how it is actually being conducted is another problem, and it is as important and decisive as the purge itself. And a serious paradox has emerged here. The methods employed in the purge have come to pose a serious threat to that very democracy and rule of law whose protection makes the purge and the reconstruction of the state an imperative.

Five days after the putsch, the Turkish government declared a state of emergency, a situation where the government suspends certain basic rights and freedoms. Ever since, Turkey has been governed through legislative decrees that bypass parliament. The paradox stems both from the legal flaws in how the Gulenists are being pursued, which has increasingly resembled a witch hunt, and the way the emergency-rule regime is being used, going beyond the stated purpose of pursuing and cleansing the putschists.

The magnitude of the numbers is in itself the sign of a problem, suggesting not the purge of a putschist group within the state, but rather the cleansing of a certain segment of society, carried out on the basis of assumption and political discretion and creating a new army of victims.

Indeed, most expulsions at public institutions and universities have been based not on concrete findings and clear evidence, but on suspicions, hearsay, anonymous tipoffs, managerial discretion and lists drawn up by administrators. The expulsions are often legalized by being incorporated into legislative decrees. Along with direct participants in the coup and active Gulenists whose affiliations rest on evidence, the purges have spanned people who have had some contact with the Gulen community at some point or had opened accounts in the Gulen-affiliated Bank Asya, businesspeople who had donated money to Gulenist schools — knowingly or not — and journalists unbeknownst of Gulenist agendas who wrote in their newspapers, appeared on their TV channels and criticized the government’s oppressive measures against the Gulen community before the putsch. Many of those people have not just lost jobs, but ended up in police custody or behind bars and seen their properties or companies confiscated.

This state of affairs — including the search for justice that will soon follow and the new legislation this will require — represents a new political input that will keep all state organs busy for years to come and add fresh authoritarian pressure on the system.

There is another critical issue in this context: The suspicion of a covert Gulenist presence in the state may become permanent. A political system centered on suspicions and perception of threat has long been a fundamental feature of authoritarian regimes. Hence, this amplifies the risk that Turkey’s political system may devolve into an “authoritarian stability” model, centered on the notion of “threat and danger.” Stoking concerns to that effect, President Recep Tayyip Erdogan last month defended the three-month extension of the emergency rule, saying that even “12 months may not be enough.”

The use of emergency-rule powers beyond the stated aim of purging Gulenists represents a very serious problem for the Turkish system, illustrated strikingly in the tough sanctions that some liberals and government opponents have faced. Prominent liberal intellectuals like Sahin Alpay, Ali Bulac, Murat Aksoy and the Altan brothers — all known for their anti-militarist stands and vocal criticism of Erdogan — have been arrested on trivial grounds for alleged involvement in the coup, demonstrating that the purges have turned into a cleansing campaign targeting government opponents beyond the Gulenists.

Another crucial aspect pertains to the Kurdish issue. The government has come to conduct its security-centered Kurdish policy via emergency-rule powers, which restrict basic rights and freedoms, bypass the legislature and allow the government to enact legislative decrees that push the limits of law. The government last month suspended some 11,000 Kurdish teachers — without any investigation — for alleged links with the Kurdistan Workers Party. It also issued a legislative decree allowing it to appoint replacements for mayors and other elected municipal officials removed for “terrorism” and “abetting terrorism.” Subsequently, public servants were appointed as trustees in the place of elected politicians at 24 local administrations held by the Kurdish Democratic Regions Party. Additionally, scores of newspapers, television stations, internet sites and associations deemed to be linked to the Kurdish movement were closed.

Those measures have all served to shrink the democratic domain and suppress the visibility of the Kurdish movement on the political scene, leading to the arrest of intellectuals like novelist Asli Erdogan and linguist Necmiye Alpay for assuming temporary or symbolic duties at Kurdish newspapers.

All of those developments demonstrate that the emergency-rule regime is taken up not as a tool limited to purging the putschists and rebuilding the state, but as a general and natural political and legal order. Clearly, this will now be a second key problem for Turkish politics after the fallout of the attempted coup, coming atop the government’s already authoritarian and paternalistic practices.