Purges at municipalities and schools in Turkey’s mainly Kurdish southeast, carried out as part of an emergency rule that was supposed to target the putschists behind the July 15 coup attempt, will make the Kurdish problem even more intractable. 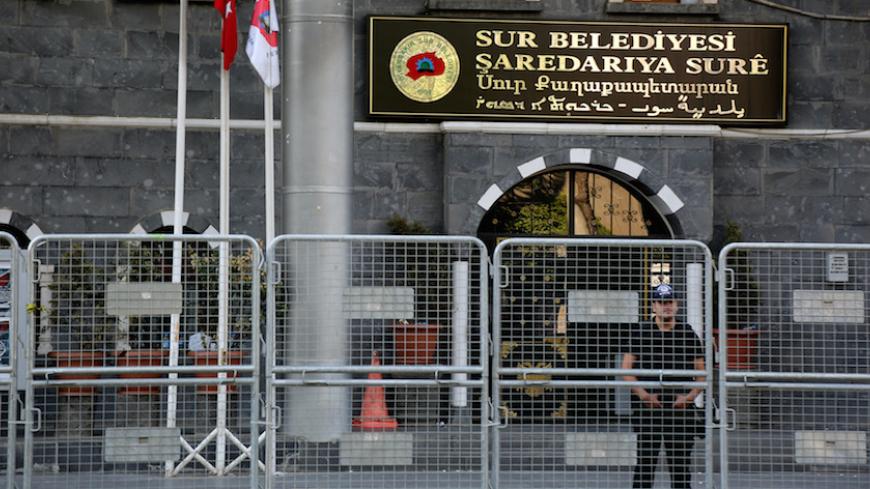 A riot police officer stands guard in front of the Sur municipality office, following the removal of the local mayor from office after he was deemed to support Kurdish militants, in Diyarbakir, Sept. 11, 2016. - REUTERS/Sertac Kayar

Five days after the July 15 coup attempt in Turkey, President Recep Tayyip Erdogan convened back-to-back meetings with the Council of Ministers and the National Security Council, installing a nationwide state of emergency. According to what he said at the time, the state of emergency, which empowers the government to restrict basic rights and freedoms and govern via legislative decrees, aimed to “eliminate the putschist terrorist organization.”

The measures, however, have gone well beyond the stated aim of purging the putschists of the so-called Fethullah Gulen Terror Organization (FETO), the term Ankara uses to refer to Gulen followers. Now, eight weeks later, the measures have begun to further complicate Turkey’s long-standing Kurdish problem. Two decisions, announced last week under the state of emergency, have raised the specter of escalation in the conflict spawned by the Kurdish problem.

On Sept. 11, the Interior Ministry appointed trustees to run 28 municipalities in the predominantly Kurdish east and southeast, including two big cities — Batman and Hakkari — as well as 24 districts and two towns. This meant the ouster of elected mayors, whose ministry-appointed replacements took office the same day.

According to an Interior Ministry statement, 24 of the 28 mayors were removed for aiding and supporting the Kurdistan Workers Party (PKK), a designated terrorist organization, and its affiliate, the Kurdistan Communities Union. Twelve of them, the statement said, were already behind bars, arrested earlier pending trial.

The 24 Kurdish mayors were elected in the March 2014 local elections on the ticket of the Peace and Democracy Party, which soon became the Democratic Regions Party (DBP). The same year, the Kurdish movement, teaming up with some elements of the Turkish left, created the Peoples’ Democratic Party (HDP), which aspired for a nationwide outreach. While the DBP focused on local administrations, the HDP won parliamentary representation in the two general elections last year to become the voice of the Kurds in national politics.

Among the seized municipalities are those of the districts of Sur and Silvan in Diyarbakir province, Nusaybin in Mardin province, and Cizre and Silopi in Sirnak province, which were all the theater of fierce clashes after Ankara’s resumption of the war on the PKK in July 2015, suffering massive destruction, largely from artillery fire employed by the Turkish military.

The remaining four mayors were associated with FETO, including three from the ruling Justice and Development Party and the fourth from the Nationalist Action Party.

The ouster of the mayors had been expected for weeks, as Ankara did little to hide its intentions. Interior Minister Suleyman Soylu — appointed last month to replace Efkan Ala, whose post-putsch performance reportedly failed to satisfy Erdogan — offered this justification two days before the move: “Within 15 days, in line with the authority the legislative decree gives us, the administration of 28 municipalities will be no longer in the hands of terrorists [taking] instructions from the Qandil Mountains [where the PKK leadership is based in Iraq], but in the hands of people who carry this star-and-crescent flag in their hearts.” The statement was a clear indication that, in the climate of the bloody war with the PKK, the government saw elected Kurdish mayors as PKK extensions who should be sidelined.

Several days earlier, HDP co-chair Selahattin Demirtas had used equally tough language, though for a different message to the Kurds. “Don’t obey the trustees, don’t carry out their orders. We’ve ushered to a dictatorship. We are not going to bow down to such a man,” Demirtas said, referring to Erdogan.

Put side by side, the two statements illustrate how big the rift between Turkey’s main Kurdish party and the government has grown.

And the tone and wording of the statement the HDP issued the day the mayors were ousted reflect how the move is perceived in the Kurdish political public opinion. “The mentalities of those who on July 15 bombed parliament, i.e., the elected representatives of the people, and those who barged into elected municipalities, yelling ‘We’ve seized the administration’ and usurped the will of the people are in no way different,” the statement said. “Local administrations in Kurdish cities elected with vote shares of between 65% and 95% have been chosen as the essential target in the trusteeship coup. This unlawful and arbitrary action will deepen the existing problems in Kurdish cities and make the Kurdish problem an even more unresolvable one.”

The second purge, for which the government used emergency-rule powers to battle the PKK, targeted thousands of Kurdish teachers. On Sept. 8, the Education Ministry suspended 11,285 teachers on grounds they were linked to the PKK. According to reports, the teachers were deemed to have lent support to the PKK by “disrupting curfews” in the southeast and taking part in demonstrations that “obstructed the right to education.”

Prime Minister Binali Yildirim had said Sept. 5 that an estimated 14,000 teachers in the southeast were “in some way involved with terrorism” and implied they would share the fate of FETO members expelled soon after the putsch.

The purges — carried out by misusing the powers made available by the state of emergency, the original purpose of which was to fight the putschists — mesh with a short but memorable sentence that Yildirim had uttered in early September. Referring to the Kurdish problem, he declared, “There’ll be no settlement schmettlement.”

And he was right. The settlement of the Kurdish problem is not on the government’s agenda, not even as lip service. The termination of “the solution process” was the core of the bargain Erdogan struck with his nationalist and conservative Sunni base ahead of the Nov. 1, 2015, snap elections, which he called to reclaim his parliamentary majority, lost in the June 7 polls. And this deal will continue until the early elections or the referendum that Erdogan hopes for to formalize his de facto, authoritarian presidential regime with a constitutional amendment. This, in turn, means the conflict in the southeast will drag on indefinitely as no early election or a referendum has been scheduled.

With “no settlement schmettlement” on the cards and emergency-rule powers used to oust a legal Kurdish party from local administrations and teachers from schools, the repercussions in the southeast are not hard to predict. In the highly politicized Kurdish grassroots, the government’s excesses are likely to erode faith in democratic processes and stoke the propensity to violence. The perception that Kurds are purged from the public sector just for being Kurds could spread far and wide, ossifying a sense of inequality that would be difficult to mend. Finally, the government’s hard-line measures should be expected to strengthen the Kurdish separatist current that upholds violence and terrorism.