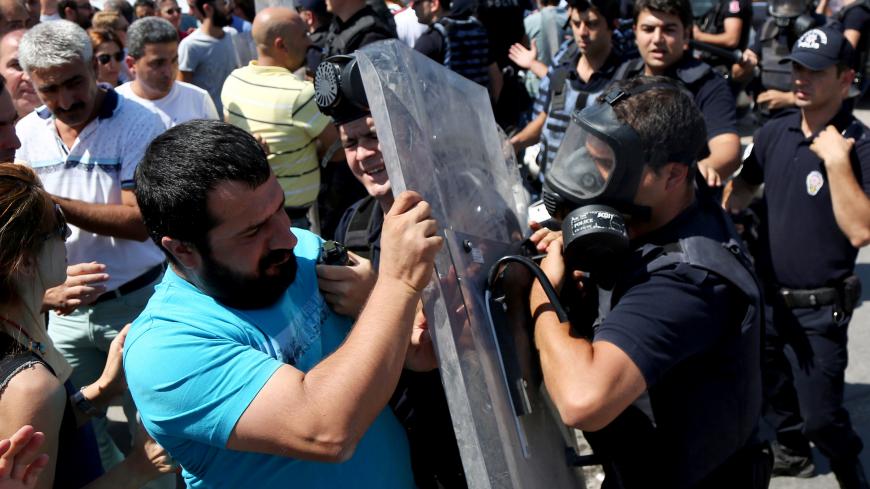 Demonstrators scuffle with riot police during a protest against the suspension of teachers from classrooms over alleged links with Kurdish militants, in the southeastern city of Diyarbakir, Turkey, Sept. 9, 2016. - REUTERS/Sertac Kayar

Kadri Gursel writes that the Turkish government’s purge following the attempted July 15 coup against President Recep Tayyip Erdogan has expanded beyond presumed supporters of Fethullah Gulen to include alleged followers and sympathizers of the Kurdistan Workers Party (PKK).

The Interior Ministry this month replaced 24 mayors for supporting the PKK, which is a designated terrorist organization in Turkey, as well as its affiliate, the Kurdistan Communities Union. Half of those removed from office are already in jail awaiting trial. Gursel explains that the mayors “were elected in the March 2014 local elections on the ticket of the Peace and Democracy Party, which soon became the Democratic Regions Party (DBP). The same year, the Kurdish movement, teaming up with some elements of the Turkish left, created the Peoples’ Democratic Party (HDP), which aspired for a nationwide outreach. While the DBP focused on local administrations, the HDP won parliamentary representation in the two general elections last year to become the voice of the Kurds in national politics.”

The Ministry of Education then suspended 11,825 teachers for supporting the PKK by “disrupting curfews” and participating in demonstrations that “obstructed the right to education,” Gursel writes.

When asked about the Kurdish question earlier this month, Turkish Prime Minister Binali Yildirim indicated that no compromise is planned. “There’ll be no settlement schmettlement,” he said.

Gursel concludes, “With ‘no settlement schmettlement’ in the cards and emergency-rule powers used to oust a legal Kurdish party from local administrations and teachers from schools, the repercussions in the southeast are not hard to predict. In the highly politicized Kurdish grassroots, the government’s excesses are likely to erode faith in democratic processes and stoke the propensity to violence. The perception that Kurds are purged from the public sector just for being Kurds could spread far and wide, ossifying a sense of inequality that would be difficult to mend. Finally, the government’s hard-line measures should be expected to strengthen the Kurdish separatist current that upholds violence and terrorism.”

Turkish military may need two years to recover from purge

Metin Gurcan provides the most detailed analysis to date of the impact of the purges on the Turkish Armed Forces (TSK). Many of those dismissed or arrested were brigadier generals, rear admirals and air force combat pilots.

“Although the TSK appears to be coping with the effects of the dismissals, no one can deny that the special forces units, underwater assault teams and TAF [Turkish Air Force] search and rescue teams will need at least a year — for the TAF, a minimum of two — to restore their personnel numbers to pre-July 15 levels,” Gurcan writes.

Gurcan concludes, “In short, the depletion of air combat and helicopter pilots and special forces personnel has adversely affected the combat strength of the TSK, but it is generally felt that the high motivation of the remaining personnel can make up for the numerical decline. It is fortunate that the second army, which is fighting the PKK, maintaining border security with Syria and participating in Operation Euphrates Shield, has been the least affected command. But at the end of the day, the TSK will need at least two years to recover from the losses inflicted by the coup attempt and the consequent purges.”

40,000 Turks in "gray area" regarding crackdown

Metin Cetingulec reports that 51,000 public sector employees have been dismissed from the Turkish public service because alleged ties with what the Turkish government calls the Fethullah Gulen Terror Organization (FETO).

“The names of the people who were dismissed were published in the Official Gazette, exposing them for all to see and crushing their chances of employment in the private sector. Those who asked for retirement saw their applications rejected,” Cetingulec writes.

There is a sense of fear and anxiety throughout Turkish society, as the purges affect all walks of life. “The hunt for FETO supporters in the public sector is also continuing,” reports Cetingulec. According to the daily Sabah, another 40,000 people have been put in a "gray" category, risking expulsion if their suspected bonds with the group are "clearly established."

Sukru Kucuksahin adds, “The frenzy and severity of the purge seems to have irked even its standard-bearer, Erdogan, who last week grumbled that “irrelevant” people were being targeted. Then, addressing governors, he said, “I don’t want you to compete with each other on who gets more public servants dismissed. I want you to be fair.”

Cengiz Candar reports that the detention of prominent novelist and independent journalist Ahmet Altan and his brother, Mehmet Altan, a distinguished academic and columnist, has “created an enormous backlash across the world, with hundreds of international intellectuals signing a letter of protest against the Turkish government. At the time of this writing, the number of international intellectual celebrities had reached 217, and the number continues to soar.”

Among the accusation against the brothers is their “participating in a coup plot by giving ‘subliminal’ or ‘subconscious’ messages in a television talk show a day before the coup attempt.”

Candar concludes that “it is getting to be more and more unsustainable. The growing reaction of the international intelligentsia is a glimpse of hope not only for the freedom of Ahmet Altan and Mehmet Altan — who are spending the long holiday in an Istanbul jail — but also for other jailed intellectuals and journalists and for Turkey itself.”

Pinar Tremblay reports on how Turkish millennials have turned to alternative, light-fare print magazines, which have offered a respite from the brutal crackdown on independent media.

“These magazines are popular because they tell people they can make them smile again, even if for a little while. They ridicule authoritarian language with a shrewd riddle. Most importantly, they are keeping the pulse of young people in Turkey. Because they are seen as light and goofy, they have so far managed to escape the wrath of governmental censorship, but just like the nursery rhymes that have survived for centuries, some of these magazines’ slogans, images and poems have infiltrated the minds and mobile devices of the younger generations in Turkey. We cannot calculate precisely how strong their political effect will be, but they are likely to outlast the existing ruling elite,” writes Tremblay.