New data shows military purges by the Turkish government in the aftermath of the July 15 coup attempt have adversely affected the combat strength of the Turkish Armed Forces. 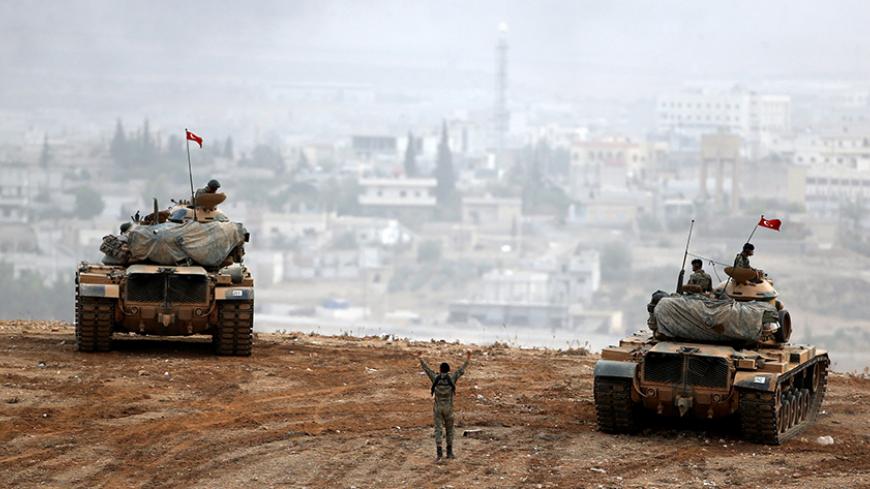 Turkish army tanks take position on top of a hill near the Mursitpinar border crossing in the southeastern Turkish town of Suruc in Sanliurfa province, Turkey, July 26, 2016. - REUTERS/Umit Bektas/File photo

In the aftermath of the July 15 abortive coup attempt, four major purges on July 27, July 30, Sept. 2 and Sept. 7 dismissed thousands of officers and noncommissioned officers from the Turkish Armed Forces (TSK). Since then, speculation has been rife on how these purges have affected the TSK’s combat effectiveness and on whether there will be problems filling critical posts.

On Sept. 8, for the first time since the purges, the official website of the chief of staff provided a breakdown on the TSK personnel changes.

When we compare these numbers with the March 2016 figures, we see a 38% reduction in the number of generals, which then numbered 325 in three branches and an 8% reduction from 32,451 officers. There were no major changes in other ranks.

Dismissals after July 15 have mostly affected brigadier generals and rear admirals. As the TSK maintains a huge pool of colonels, it will not be hard to fill those vacancies. Brigadier generals who were dismissed in August were rapidly replaced. Colonels were quickly promoted and posted to critical brigades in the east and southeast, while others are serving as acting commanders in the western brigades. There were 27 major generals and seven lieutenant generals dismissed and replaced in August. In sum, all dismissed generals have been replaced and there are no shortages.

The officer group most affected by dismissals is the air force combat pilots. The TSK has 321 warplanes, 240 of them F-16s. In March, Turkey's air force, the TAF, had 600 active pilots. After the dismissals of about 280 of them, there are now about 300 combat pilots available. Before July 15, there were nearly two pilots for each warplane. This figure is now down to 0.8.

Meanwhile, investigations into many combat pilots continue, raising the prospect of more dismissals.

How will the TAF meet its pilot needs? There is a three-pronged approach to this critical problem. First, the 15-year compulsory service of combat pilots may be raised to 18 years. There is also a plan to recruit sophomore and junior university students from the departments of industrial engineering, electronics, aeronautics, space sciences and computer sciences to the Air Force Academy and to train them as combat pilots in an accelerated two-year program. Finally, the government has issued a call inviting pilots who have left the service and are now mostly working for civilian airlines to return to the TAF. There are reports that 140 former combat pilots are preparing to return to service.

With these measures, the combat pilot deficit can be overcome within two years. But between now and September 2018, the current crop of combat pilots will be working hard, with much overtime and longer rotations.

Also to be noted are the dismissals of about 30 pilots of the 10th Tanker Squadron based at Incirlik Air Base that provides aerial refueling of combat planes. This will likely affect the aerial refueling capacity of the TAF for the time being.

Another group affected by the dismissals is the army's helicopter pilots. About 20 of them, including assault helicopter pilots, have been dismissed. Their absence means a much heavier workload for the army pilots, who have major tasks in the fight against the Kurdistan Workers Party (PKK).

Among the dismissals are a disproportionate number of battalion and team commanders in the special forces, from the navy’s elite Underwater Assault Unit and the TAF’s Combat Search and Rescue personnel.

Many special forces battalion commanders and team leaders were arrested and dismissed from service on charges of participating in the coup. Similarly, there are reports of dismissals of a high number of helicopter pilots and other officers and NCOs serving in TAF’s elite Search and Rescue teams. The coup attempt cost the elite units of the TSK dearly.

In the army, most of the dismissals are from the Chief of Staff headquarters and Land Forces Command in Ankara and from units in Istanbul. The second army command responsible for combating terror in the southeast, border security with Syria and the current Operation Euphrates Shield has suffered the least. About 20 brigades of the second army command are now operationally active with their new commanders.

In the navy, most of the dismissals are from the command offices in Ankara or personnel serving in rear headquarters. The navy has been the least affected branch.

In light of this information, it is clear that the most affected are the TAF's combat and tanker pilots and then the Special Forces Command, the Land Force's aviation units and finally the navy's headquarters personnel.

Although the TSK appears to be coping with the effects of the dismissals, no one can deny that the special forces units, underwater assault teams and TAF search and rescue teams will need at least a year — for the TAF, a minimum of two — to restore their personnel numbers to pre-July 15 levels.

But sources speaking to Al-Monitor in Ankara note that morale and motivation in the TSK have risen significantly with Operation Euphrates Shield that began Aug. 24. They said they were gratified that so many officers and NCOs cut their leaves short or did not take the leave they were due and volunteered for combat service.

Among the TSK personnel now detained, there are scores who were not involved in the coup attempt. Concluding their investigations could further increase the number of available officers.

In short, the depletion of air combat and helicopter pilots and special forces personnel has adversely affected the combat strength of the TSK, but it is generally felt that the high motivation of the remaining personnel can make up for the numerical decline. It is fortunate that the second army, which is fighting the PKK, maintaining border security with Syria and participating in Euphrates Shield, has been the least affected command. But at the end of the day, the TSK will need at least two years to recover from the losses inflicted by the coup attempt and the consequent purges.