Running short of personnel because of massive purges, Turkey's armed forces are trying to fill the void using civilians. 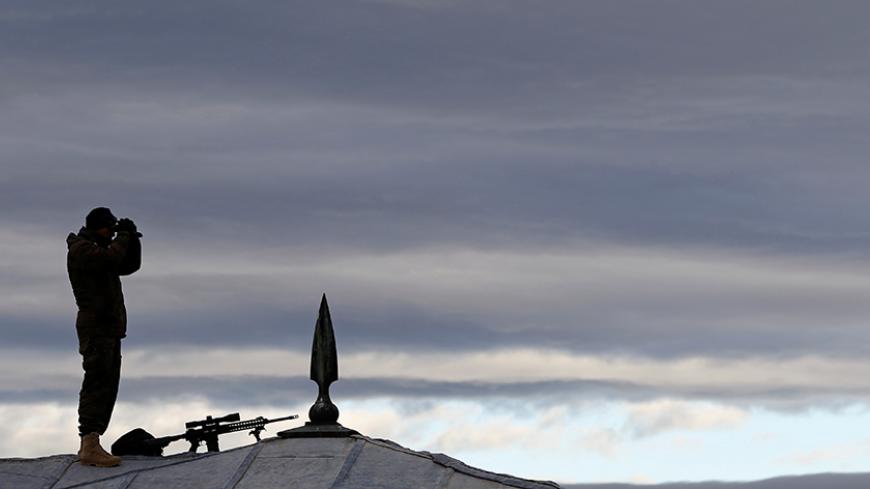 A police special forces member stands on top of a roof as part of security measures during a ceremony at the mausoleum of Mustafa Kemal Ataturk, Ankara, Nov. 10, 2016. - REUTERS/Umit Bektas

The Turkish military is looking for more than a few good men. Many, many more.

In fact, it needs so many replacements for the military personnel it has purged since a July 15 coup attempt, the government has actually been advertising in newspapers for people to fill almost 25,000 openings.

Although four months have passed since the failed coup, the government continues suspending and dismissing members of the Turkish Armed Forces (TSK) at top speed, leaving it with gaping personnel deficits. At full force, the TSK had about 39,000 officers and 97,000 noncommissioned officers (NCOs), including the gendarmerie and the coast guard command.

Minister of Defense Fikri Isik announced that the latest tally of discharges as of Nov. 17 had reached 3,665 personnel and 16,423 military cadets, for a total of 20,088. The government is purging anyone suspected of having ties to Fethullah Gulen, a Turkish cleric residing in the United States whom officials believe was behind the coup.

When asked why the expulsions continue four months after the failed coup, a military source in Ankara told Al-Monitor, “At the moment, about 3,000 TSK personnel are either in detention or under arrest. As investigations continue, new names are discovered."

Obviously Ankara thinks there are thousands of officers and NCOs still linked to the Gulenist movement.

Former military prosecutor Ahmet Zeki Ucok, who frequently says the Gulenists inside the TSK still have not been totally removed, insists that when compared with the Ministry of Education, the Security General Directorate (police) and the Ministry of Justice, the TSK is lagging far behind when it comes to eliminating Gulenists in their ranks.

“For example, indictments say 80% of cadets enrolled in military schools in the past 10 years were Gulenist-oriented. This means that of 5,000 cadets enrolled each year, at least 4,000 are working for the Gulen movement,” Ucok told Turkey’s Hurriyet newspaper.

Ucok also says the percentage of Gulenists is higher among the TSK's lower ranks. He calculates that despite the discharges there are still about 20,000 active officers and about 50,000 NCOs who identify with the Gulenist movement.

When asked why, if there are so many thousands of Gulenists in the TSK, they didn’t all join in the coup attempt, Ucok didn't have a clear answer.

But according to a retired colonel who spoke with Al-Monitor on condition of anonymity, during the coup attempt the only Gulenists exposed were officers with the rank of major and above working at the chief of staff headquarters, force commands and other critical commands, plus a small number of Gulenist officers in field units. This retired officer thinks officials must continue weeding out lower-ranking officers and senior master sergeants.

In my Sept. 16 Al-Monitor column titled “How post-coup purges depleted Turkey’s military,” I wrote that the branch most affected by the personnel purges was the air force, followed by the army, with the navy being minimally affected. Serious personnel discharges from the Special Forces Command attached to the chief of general staff were not mentioned.

In unexpected discharges in October and November, the navy was most affected. Military sources told Al-Monitor that because of continuing clashes in the country's southeast, the decision to redeploy major units and continue Operation Euphrates Shield in Syria was made to defer further expulsions from the army and the air force. Major purges can therefore be expected from the army in coming months.

Another development noted in recent discharges was the change in methodology. Until October, expulsions of TSK personnel were routinely announced in long government-approved lists published in the Official Gazette. Discharges after October are now done every few weeks in smaller batches announced by the Ministry of Defense. A source told Al-Monitor, “These discharges are conducted quietly without attracting media interest and the attention of the public.”

In other words, it is highly likely that the TSK will spread its discharges over perhaps two years to smaller packs of 20 to 30 names without attracting much attention.

So, what is the TSK doing to overcome this bloodletting?

At the beginning of November, advertisements were issued to recruit about 1,400 officers, 3,600 NCOs, 7,159 specialist sergeants and 11,907 specialist privates. Army, navy and air force officer training academies that had been declared closed were reopened for 3,500 students to transfer from civilian universities.

For the first time, 200 officers and 500 NCOs will be recruited from the civilian public for the Special Forces Command. As of today, 6,129 people have applied as officer candidates for the special forces, and 11,368 as NCOs.

Traditionally, special forces personnel were selected from among volunteering officers and NCOs with outstanding records. Opening their recruitment to civilians via newspaper ads instantly generated debates on the quality and experience of potential candidates.

The same concerns are being raised in all branches. Also attracting attention was the landmark decision to allow theology high school graduates to apply for officer and NCO posts. The Justice and Development Party government is opening a new field of employment calling for about 300,000 male theology graduates annually, as I noted in my May 9, 2016, column titled "Turkish military faces secularism test.”

In what some see as another shift away from Turkey's secular state, as of August, the government began allowing female police officers to wear headscarves when in uniform. It won't come as a surprise if a debate arises soon over whether the TSK’s female officers and NCOs should also be allowed to wear scarves when in uniform. Perhaps allowing female civilian employees of the TSK to wear scarves as of November was the first step.

In short, drastic changes in the TSK's personnel profile are continuing with discharges and stepped-up recruitment to fill the ranks. And it is likely to continue for about two years in small batches. These changes are bound to transform the institutional culture, strategic identity and combat effectiveness of the TSK.