The Turkish government is investigating some 15,000 more military members suspected of being connected with the Gulenist movement, and 4,000 may be ousted soon. 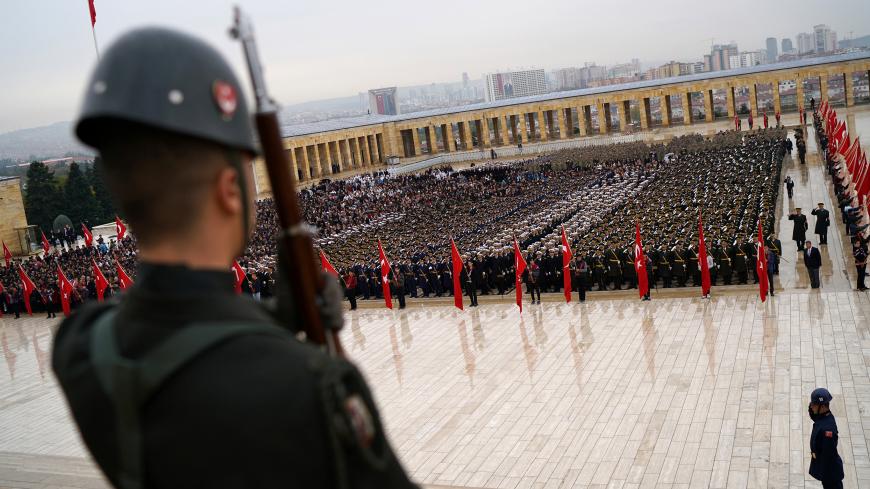 It's looking like a new wave of government purges is about to crash down on Turkey's military. Statements from officials and developments on the ground signal the government is about to move on thousands of suspected members of the Gulen movement, which is blamed for the July 15, 2016, coup attempt. Security sources speaking to Al-Monitor confirmed the signs.

Interior Minister Suleyman Soylu, addressing a parliamentary committee Nov. 19, emphasized that even more than two years after the failed coup, the struggle hasn't ended against the Gulenist network. The network, which the government defines as a terrorist organization, is named after Fethullah Gulen, a Sunni cleric and Turkish national who now lives in the United States.

“We have [another] task to complete together with our Ministry of Justice," Soylu said. "Yes, we will be more at ease then, although it won’t mean that the threat is totally eliminated."

Soylu said anti-Gulen operations are “at a critical juncture." Until now, the most significant steps taken since the failed coup have been to identify and dismiss personnel who had downloaded certain messaging applications, such as Bylock, Eagle and Tango, to their smartphones or computers.

Based on these criteria, tens of thousands of civil servants and hundreds of active-duty officers, noncommissioned officers and sergeants working under contract were dismissed from the service.

Now there's talk in Ankara corridors of a new purge of about 4,000 military personnel. This time, suspicions are focused on what investigators consider an unusual pattern of phone use from landlines and public phones.

According to prosecutors, if a military member is called from a public phone twice or more in succession, this is seen as abnormal use. The caller and the person who was called are then labeled suspects, and officials launch investigations.

This is why tens of millions of calls from landlines all over Turkey since 2012 are being checked, one by one.

Security sources who spoke to Al-Monitor without identifying themselves believe this sequential-calls system provides stronger evidence than the possession of Bylock, Eagle or Tango apps used by the Gulenist network to communicate between critical posts of their affiliated officers, police and judges. Prosecutors, carefully studying suspects' testimonies, think covert Gulenist group leaders frequently used this method to arrange secret meetings between small groups of two- or three-person cells.

Ankara is taking the process very seriously because over the past two years the struggle has led to the detentions of 8,508 military suspects in operations carried out in 75 provinces. According to figures released by Turkey’s state-run news outlet Anadolu Agency, of these suspects, 3,341 were subsequently arrested, 4,538 were released conditionally, 574 were acquitted and 55 are thought to remain in custody pending resolution of their cases. Some 46% of the suspects reportedly confessed.

Ministry of Interior figures show the most soldier suspects, 892, have been detained in Ankara. Of these, 427 were arrested and some were released conditionally by confessing.

Defense Minister Hulusi Akar said 150 Turkish Armed Forces (TSK) generals, 7,595 officers, 5,723 NCOs, 1,261 contract sergeants and 424 civilian staff — for a total of 15,153 personnel — had been discharged as of November as part of the anti-Gulen campaign. When no evidence was found against 323 mostly low-ranking officers, they were reinstated.

In the past two months, the Ministry of Defense has ordered an increasing number of discharges: more than 100 officers and NCOs.

Security sources speaking to Al-Monitor said currently some 15,000 soldiers, including 4,000 in Istanbul, are under investigation for their landline phone use. Some 4,000 people are expected to be purged from the different branches of the armed forces including land, navy and air force commands, gendarmerie command and Coast Guard.

What hasn't been decided yet is whether the government will discharge the anticipated 4,000 sequential-caller suspects in a single move or in smaller batches. The answer to this question is directly related to the internal climate of the country.

My take is that it's essential for the government to maintain the public’s belief that the "Gulenist threat continues” as the March local elections approach. The best way to sustain that perception is to dismiss military personnel on charges that they are Gulenists. To preserve the pace of tension and perhaps reinforce the perception that the Gulenists might attempt another coup, the government might decide to discharge the soldiers in small batches.

The dominant thinking in Ankara nowadays is that Gulenists must be pursued decisively, no matter how it could hamper the TSK's operational effectiveness and harm morale and motivation — especially at junior ranks. That means, given that 15,000 are under investigation, purges of personnel of all ranks could well continue even after the elections.

Turkey is truly going through interesting days. A ranking TSK officer may be expelled just because he is called from a landline — even if he never lifts the receiver.

An officer speaking to Al-Monitor without giving his name said the officers most affected are those with children attending elementary school and those whose children make playful phone calls to their fathers.

Under new arrangements, the Supreme Military Council's approval of expulsions from the TSK is no longer mandatory. Allowing the Defense Ministry to make such decisions without obtaining legal rulings has truly facilitated the discharge process. An officer with the slightest suspicion against him can easily be expelled with an administrative decision from the ministry. This would require each accused to spend money, time and effort to prove to the state, his colleagues and the people around him that he is not a Gulenist network member.

This process will naturally wear down officers and their families.