A fresh judicial probe targeting hundreds of suspected Gulenist soldiers shows that purges in the Turkish military are far from drawing to an end. 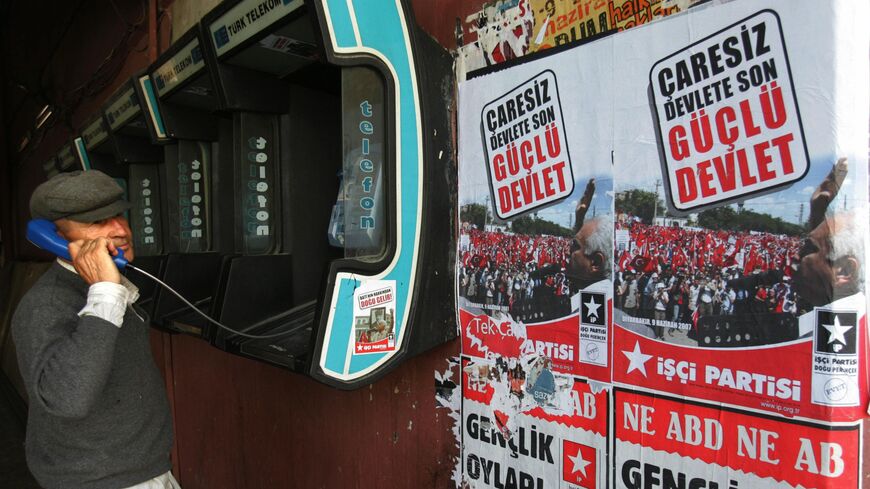 Records of calls made from pay phones are being used to arrest soldiers suspected of being members of the Fethullah Gulen network. Here, a Turkish man speaks on a pay phone as he stands next to election campaign posters on July 19, 2007, in the capital city of Ankara. - GALI TIBBON/AFP via Getty Images

Armed Militias and Extremist Groups
Courts and the law
Terrorism
May 1, 2021

Almost five years since a botched coup attempt, the Turkish authorities are still on the hunt for soldiers thought to belong to the outlawed network blamed for the putsch, with the purge now apparently spreading to the lower ranks of the military.

On April 26, Turkey woke up to a massive roundup of suspected followers of US-based preacher Fethullah Gulen, who had built a sprawling network in the Turkish military, judiciary and police. The network is now designated as a terrorist group. The operation — the largest in the past two years — kicked off simultaneously in 62 of Turkey’s 81 provinces and Turkish Cyprus, targeting 459 on-duty military personnel. The suspects were caught in the prosecutors’ net for alleged phone communication with undercover group leaders of the Gulenist network called “imams.”

Al-Monitor has learned that the detention orders targeted more than 350 members of the land forces and the gendarmerie, while the remaining suspects belong to the air and naval forces. Some 20 suspects serve at the Defense Ministry. Nearly 380 of the suspects are noncommissioned officers, with the rest ranking from lieutenant to colonel.

What to make of such large-scale probes still going on despite the many purges that have already taken place since the July 15, 2016, coup attempt?

Ahmet Zeki Ucok, a retired colonel who has served as military judge and prosecutor, believes that only half of the Gulenists in the army have been uncovered thus far. Ucok is known for having launched the first probe into Gulenist soldiers in 2009. However, it was Ucok who landed behind bars at the time, when the Gulenists were still the de facto ally of the ruling Justice and Development Party.

In remarks to a Turkish news site April 26, Ucok said, “Most of the previous detention waves began with generals and admirals. Now they are moving down to lower ranks. Think of it as a pyramid — first the higher ranks and then gradually down to the lower ones. The more you go down the pyramid, the larger the number of detentions.”

The predominance of noncommissioned soldiers among the new suspects seems to corroborate Ucok. This, in turn, raises the prospect of more operations on a similar scale targeting the lower, younger ranks of the military.

According to Defense Minister Hulusi Akar, the number of those expelled from the army due to Gulen network links totaled 20,610 in December. Assuming that Ucok’s estimation is correct, this would mean that some 20,000 soldiers with Gulenist links remain in the military.

Interior Minister Suleyman Soylu said April 30 that the authorities had expanded investigation of public pay phone records, which are said to expose a pattern of covert communication between Gulenists. The probes had begun in Istanbul, Ankara and Izmir, Turkey’s three largest cities, but according to Soylu, “All pay phone records across Turkey are being examined now. This is the reason behind the recent increase in operations and detentions.”

A lawyer for suspects, charged on the basis of pay phone calls in earlier probes, said the prosecutors’ propensity to detain large numbers of suspects was instrumental in facilitating and expediting the purges. “You’ll see — more than a half of those detained will be released, but you’ll never read about the releases in the press,” he told Al-Monitor on the condition of anonymity.

According to the lawyer, even soldiers who are eventually released end up expelled from the army because their detentions provide an administrative ground for dismissals. In other words, the pay phone probes serve as a means to expel soldiers suspected of Gulenist links by the way of administrative decisions rather than court convictions.

According to Gulenists who reportedly made confessions to benefit from a repentance law, the network turned to pay phone communication after its first conflict with the government in 2012, when prosecutors, who would be later exposed as Gulenists, attempted to question Turkey’s intelligence chief Hakan Fidan over secret contacts between Ankara and Kurdish separatists. The crisis allegedly led Gulenists in public service, particularly those in the military and the police, to stop communicating openly to avoid being uncovered. To obscure their identities, the “imams” — leaders of groups of up to 10 people — would call their subordinates from public pay phones to inform them of the dates of upcoming meetings.

Retrospective investigations of pay phone records have focused on two types of calls. The first are the so-called singular calls, in which the caller contacts a single soldier. The main distinction here is that the caller has not contacted another soldier in a time span of 300 seconds before the suspicious call and 300 seconds after it. If a soldier has received only a small number of such singular calls and no other incriminating evidence exists, the probe usually results in non-prosecution. Additional evidence could lead to trial and conviction.

Then, there are the so-called consecutive calls, in which the caller uses a public phone to dial multiple soldiers one after another. Based on their immediate succession, the calls are believed to have been made by the same person, that is, an “imam” calling his subordinates. Prosecutors regard this pattern as serious evidence and usually order the arrest of soldiers involved in such conversations.

In a November 2019 judgment that set a precedent, the Appeals Court confirmed that such patterns of calls to soldiers from public phones could constitute a proof of secret communication and thus Gulen network membership. Rejecting the appeal of a sentenced soldier, the court cited the multiple number of successive calls in which the defendant was among the recipients and the fact that the calls were periodic and all recipients were of the same military rank.

Since then, investigations and arrests based on pay phone records have gained speed, as has the expulsion of soldiers from the army. In February, for instance, three generals were detained as a result of such an investigation.

Critics have disputed the credibility of pay phone records, arguing that the probes have led to unfair arrests and expulsions. According to media reports, some soldiers have been implicated for being contacted from a public phone number that does not officially exist or for being among the recipients of consecutive calls in which the caller appears to have made four or five calls per second, which is technically impossible.

Nevertheless, Soylu’s statement that the pay phone probes are expanding across the country comes as a signal that new waves of detentions could be in the pipeline.