As clashes in Turkey's southeast between government forces and the PKK worsen, some cities mirror the destruction across the border in Syria. 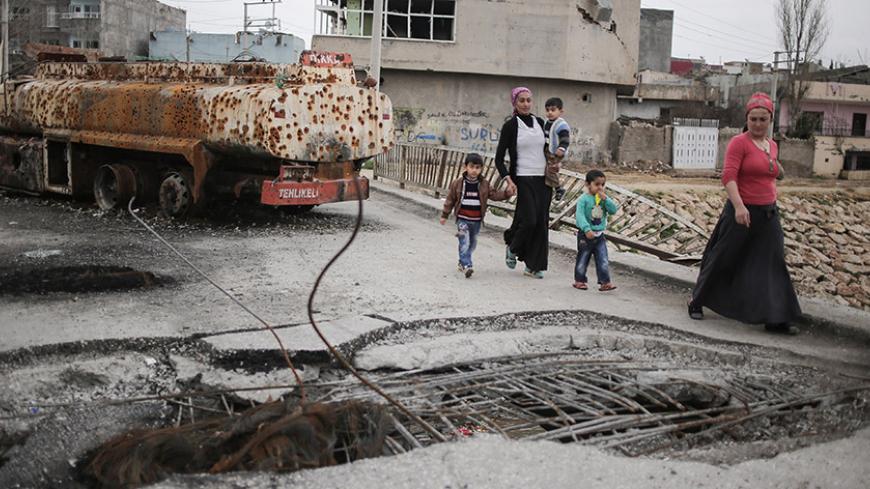 Residents walk past the trenches of the armed group Patriotic Revolutionary Youth Movement, a youth division of the Kurdistan Workers Party, in the southeastern Turkish city of Nusaybin, Feb. 25, 2016. - Cagdas Erdogan/Getty Images

A recent photo of the Turkish town of Nusaybin and its Syrian neighbor Qamishli across the border was circulated widely on social media June 5, and it went viral in no time. The photo appeared only in daily Cumhuriyet under the headline "Nusaybin leveled." In the background of the photo, which was taken from a high building in Nusaybin, an abandoned city was captured with buildings full of holes caused by artillery rounds and roads blocked by rubble. In the foreground about 30 Turkish soldiers are seen moving through a town square covered by dust and debris, protected by six armored vehicles and massive Turkish flags hanging from the destroyed buildings lining the square.

If someone had seen the photo without knowing of the destruction caused by the war Turkey has been waging in the southeast since July 2015, he would have assumed it was a Syrian town occupied by Turkey. Any sane person would have thought the photo depicted a scene from Syria, which after all is a country destroyed by war, and not a city in Turkey destroyed by the national army and decorated with Turkish flags. But as we know it is actually a photo of Nusaybin, the first thing that comes to mind is that a part of Turkey is being "Syrianized."

The caption of the photo read, “Yuksekova, Sur [Diyarbakir], Cizre, Sirnak and now Nusaybin. The same scenes all over. Operations, clashes and rubble left behind. The Mardin governorate announced that 70 security personnel were martyred and 495 PKK [Kurdistan Workers Party] militants were killed in the operation that concluded at Nusaybin.”

There are two main reasons why on March 14 the security operation, which included tanks, artillery and assault helicopters, against the PKK was launched in this town of roughly 113,000 residents and where the pro-Kurdish Peoples' Democratic Party (HDP) had received about 90% of the votes in two general elections in 2015 — first, because hundreds of armed PKK militants had deployed to Nusaybin to achieve the PKK’s ambition of autonomy, and second, faced with a surge in casualties because of the booby-traps PKK used extensively in buildings. As a result, almost all buildings in the zone of operation were destroyed by tank fire.

This applies to the other towns and cities destroyed in the military operations, too. But what made the destruction so extensive and loss of life higher in Nusaybin was the Kurdish Democratic Union Party's (PYD) control of the Syrian neighboring town of Qamishli. Some reports claim that because of the control of Qamishli by the PYD, which is depicted as the PKK’s extension in Syria, Nusaybin received logistical support from across the border. Hence, the resistance lasted longer, which resulted in more violence and destruction.

The more profound reasons of the "Syrianization" of Turkey’s southeast that is dominated by a politicized Kurdish majority can be summed up as follows.

In the end, the demand for autonomy was the consequence of building de facto alternative power structures backed by the armed strength of the PKK, which did not hesitate to use weapons to back these structures against the Turkish security forces.

The digging of trenches and erecting barricades against the security operations in the towns and cities where the politicized Kurdish base is dominant was an accumulation of all these conditions.

Second, the war launched by the regime of President Recep Tayyip Erdogan in July 2015 as a political choice against the PKK did not yield the desired results with police operations. Thus, heavily armed army units were deployed.

The PKK said in September 2013 that because of Ankara’s unwillingness to take concrete steps in the peace and solution process, it was in turn suspending the withdrawal of its armed elements from Turkey. The dramatic dimensions of the war reached today confirm that from that point on the PKK intensified its efforts to organize the resistance in the towns of the southeast and began massing weapons and explosives. It is highly unlikely that the Ankara-based intelligence services were not aware of the PKK's arms collection.

The Erdogan regime, meanwhile, noted that the "peace and solution process" with the PKK had lost nationalist votes for the party while strengthening its Kurdish opponent HDP in the southeast. After the severe losses in the election on June 7, 2015, the Erdogan regime took the political decision to wage a war against the PKK. As a result of sending tanks into the towns to restore state authority, a Pyrrhic victory was won but without town centers and residents left behind to submit to this authority. Towns all over the southeast have been left devastated and residents displaced.

As clashes are expected to intensify in the rural areas of the southeast, the PKK is shifting its focus to the larger cities in the west of Turkey. On June 7, in the crowded Vezneciler district of Istanbul’s historic center, a bomb attack against a police bus killed 11 people, six of them police, and wounded 36.

On June 10, the attack was claimed by the Kurdistan Freedom Falcons (TAK). It is well known that TAK is the acronym used by the PKK when claiming responsibility for terror operations.

None of the political actors in Turkey — above all Erdogan — is in a position to extricate the country from the spiral of terror and civil war it is caught in. It doesn’t look likely that the president can sustain the war he launched against the PKK and minimize the strength of that organization to manageable levels. When the massive human resources, strategic depth and foreign support potential the PKK enjoys are taken into account, a military solution to the PKK problem is almost impossible. To end the war with political means is unattainable as long as Erdogan remains attached to his goal of an executive presidency. Erdogan cannot possibly give the PKK the political concessions needed, or risk nationalist votes if he makes an agreement with the PKK. Hence, he is telling voters, in preparation of a war that will not end soon, “Combating terror will continue until doomsday” and “The martyrs’ hills will never be vacant.”

Meanwhile, Murat Karayilan, a PKK military-political leader, calls on his organization “to treat the revolutionary popular war more seriously,” while warning not to have any expectations for a cease-fire.

Since there is no cease-fire on Turkey’s horizon, the most realistic expectation is increasing instability with the risk of ethnic conflict. The only powers that can halt the war in Turkey are foreign actors that have the capacity to exert pressure on both sides.

But for those actors to intervene meaningfully, unfortunately one would have to wait for the war in Turkey to spread even more and become destructive enough to seriously threaten the interests of these major foreign powers.