The likelihood of a resumption of violence with the Kurds in Turkey is not a distant possibility. 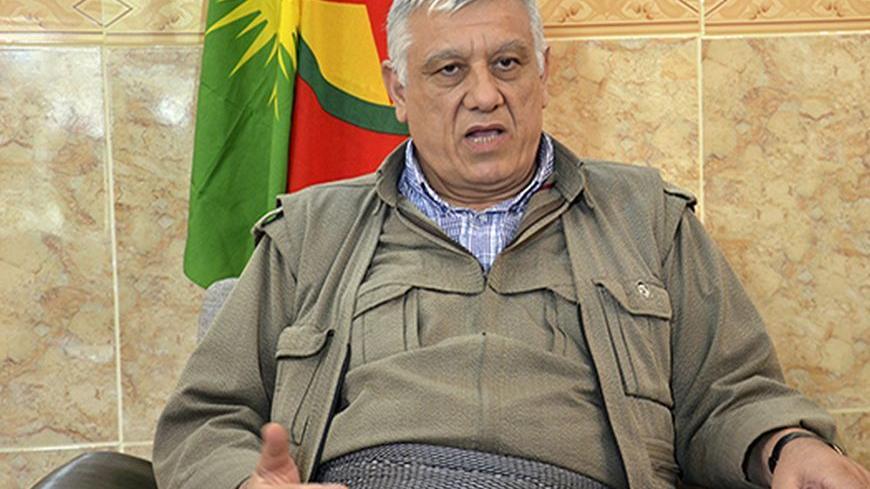 Cemil Bayik, a founding member of the Kurdistan Workers Party (PKK), speaks during an interview with Reuters in the Kandil Mountains near the Iraq-Turkey border, Oct. 19, 2013. Bayik warned of trouble between the PKK and the Turkish government, stating, "We are at the end of the process." - REUTERS

It all began on March 21, 2013, when a message from Kurdistan Workers' Party (PKK) leader Abdullah Ocalan, imprisoned for life on Imrali Island, was read to a massive crowd of Kurds who had come to celebrate the Newroz holiday in Diyarbakir’s main square. Ocalan declared the end of the armed struggle era and called on PKK militants to leave Turkey.

As expected, the PKK complied and the withdrawal process began soon after. But it didn’t take long before both the Turkish government and the PKK began expressing a lack of confidence toward the other side, accusing each other of undermining the process.

In July, Murat Karayilan, acting PKK leader, made a statement accusing the government of opportunism. He said that although Ocalan had initiated the process, he was still being kept in isolation. The government had asked the PKK to give up its arms, but it was still keeping unarmed Kurdish politicians in prisons.

Prime Minister Recep Tayyip Erdogan, in an August statement, said the PKK was acting very slowly in the withdrawal process and that only 20% of its armed forces had withdrawn from Turkey.

Expressions of mutual suspicions did not let up, and the first serious blockage appeared Sept. 9, when the PKK announced it had halted the withdrawal because the government had not taken the expected democratization steps. Withdrawal had ceased, but the cease-fire would be sustained, the PKK said.

There was much curiosity about the reaction to the “democratization package” that the government belatedly revealed on Sept. 30, as reported by Al-Monitor. PKK leader Karayilan said on Oct. 7 that the package fell short of what the Kurds had expected: “The Kurdish issue cannot be solved unilaterally with hastily hatched up packages. They are empty. The state has to change laws and introduce a constitutional solution.”

The government quarters, however, were of opposite opinion. Erdogan’s adviser, Yalcin Akdogan, wrote in an Oct. 18 article that the government had taken very serious steps toward a solution of the Kurdish issue. Akdogan wrote: "It formed the Wise Men Commission, set up a parliamentary commission and, at the end, announced the democratization package."

Cemil Bayik’s Oct. 22 remarks to Reuters, however, contradicted Akdogan’s claims of “serious developments.” According to Bayik, one of the founders of the PKK, "We are at the end of the process. Either the government accepts comprehensive and meaningful negotiations with the Kurdish movement or there will be a civil war in Turkey."

Bayik listed the steps the government has to take to unclog the blocked peace process. He called for improving Ocalan’s prison conditions; government assurance of constitutional amendments and the creation of a third party to monitor the developments needed to reactivate the process.

The government implied that they don't take occasional tough statements by PKK leaders very seriously, and anyway, the last word is always with Ocalan. In Akdogan's article, he emphasized the determinant role of Ocalan. "What all of them say is something else and what Ocalan says is something else."

But according to a report in the daily Taraf, Ocalan has also signaled that the process could entirely fail. From his words it is clear that government officials have not been in touch with him for a while. Ocalan stressed the importance of such meetings for the continuation of the process, and said, "If the state team doesn’t come, the process will end. From my point of view the process should continue with a new shape and structure. I am neither very optimistic or pessimistic about the process. Everybody should understand this."

In a March 26 Al-Monitor article, I expressed doubts whether the Turkish government had a comprehensive road map for a solution to the Kurdish issue. Unfortunately, developments since then have vindicated my doubts.

There are a few factors endangering the peace process, including: violent clashes between the Kurds and al-Qaeda in Syria’s Rojava; regional countries advising the PKK to keep its arms and the PKK’s influence on the approaching local elections in Turkey by using its arms.

Unless the government takes some concrete steps, such as re-initiating contact with Ocalan, resumption of armed clashes is not such a distant possibility.

Turkey appears to have come to a juncture for peace with the Kurds. Which way we will go will be determined by the steps taken by parties from now on.