To prevent things from getting out of hand in Turkey's peace process, both the government and the Kurds need to be acutely aware that they have much to lose from a total collapse of the talks. 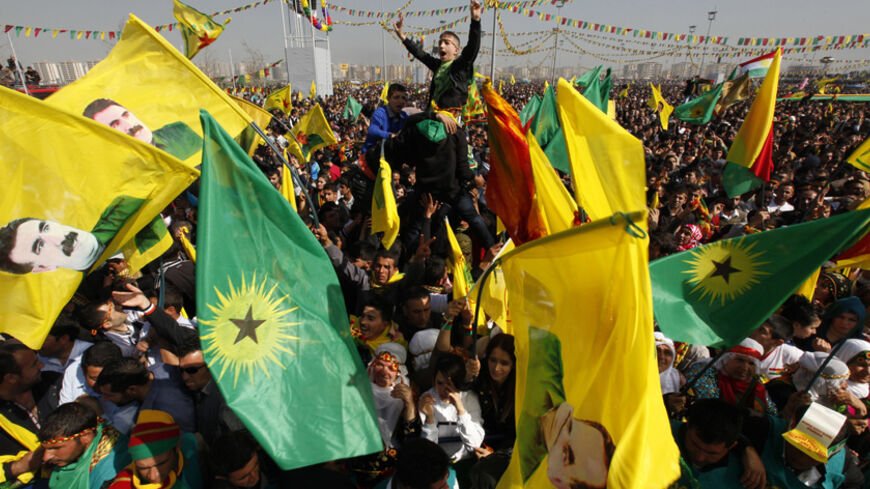 Another headline reading “The New Period in the Process” was placed atop a picture of a table ringed with empty chairs.

Hurriyet's cover story heralded a new stage in Turkey’s resolution process of the Kurdish issue. The newspaper reported that the Turkish government and the Kurdish side would gather at the negotiating table to launch a series of overdue talks to rapidly resolve the long deadly conflict.

The government’s negotiating team will be led by a security official, Undersecretary of Public Security Muhammed Dervisoglu — a name being heard by the Turkish public for the first time. Dervisoglu previously served as deputy to National Intelligence Director Hakan Fidan, who had been conducting talks with Ocalan in his prison cell for several years.

On the Kurdish side of the negotiating table, Ocalan will be chief negotiator alongside a team of members of parliament from the pro-Kurdish People's Democracy Party (HDP) and some prominent Kurdish personalities designated by Ocalan.

While Turkish officials and Kurdish politicians were struggling to salvage the stalled peace talks, news broke that Ocalan had drafted a road map to finalize the process within 4-5 months prior to the June 2015 parliamentary elections, but the government had not responded. The resolution process was on the brink of collapse.

The Kurdish side incessantly raised the issue of moving from the stage of dialogue (talks conducted by an intelligence official with Ocalan at Imrali) to the stage of negotiations, meaning talks between two parties at the negotiating table.

No wonder optimistic statements by members of parliament from the HDP — who regularly visited Ocalan in prison and also met with Deputy Prime Minister Yalcin Akdogan, who heads the government's Kurdish file — were seen as the salvation of the otherwise doomed process.

The resolution process was announced about two years ago by then-Prime Minister Recep Tayyip Erdogan. In a live TV interview, Erdogan disclosed that he entrusted the head of National Intelligence to start talks with Ocalan in his prison cell. Until that moment, since the resumption of fighting in July 2011, Ocalan was totally isolated from the outside world. Nobody was allowed to see or contact him. The bloody toll from the resumption of fighting between government forces and PKK fighters was very high for both sides and reminiscent of the bloodiest period of the conflict in the 1990s.

Erdogan had announced a daring, unprecedented move. For the first time ever, the prime minister of Turkey had committed himself to a peace process with the PKK.

In turn, on March 21, the Kurdish New Year, Ocalan reciprocated by issuing a statement: To achieve Kurdish national rights, armed struggle was no longer required. To underline his goodwill, he instructed the PKK’s armed elements to leave Turkey. Scores of PKK fighters left Turkey for Iraqi Kurdistan's Qandil Mountains, where the organization’s political and military headquarters is located.

However, the peace process — or, as it is alternately called in Turkish, “the resolution process” — has had too many ups and downs since then. It mostly stalled and did not advance. It was a train with a known destination that remained immobile at the station.

The process has been more of a matter of crisis management than a real movement for the ultimate resolution of the Kurdish question.

For the government, as long as the “process” preserved a cease-fire and the cessation of hostilities, it was a most valuable asset. The country passed through a chain of elections starting with local elections on March 30, 2014, then the presidential elections of Aug. 10, 2014, ending with the general elections of June 14, 2015.

However, the Kurdish side, particularly the PKK leadership in the Qandil Mountains, was distrustful of Erdogan and his government. They said that the Turkish side was not genuinely interested in the resolution of the conflict and was just trying to gain time until the end of the election period, that is, summer 2015.

This is why they are pressing for accelerated negotiations to reach concrete results, such as amending laws to acknowledge Kurdish national rights, improvement of prison conditions for Ocalan and, ultimately, Ocalan's release.

This distrust is reflected in the language used by PKK leaders. The effective No. 2 after Ocalan, Cemil Bayik, spoke to Turkey's pro-Kurdish TV channel, IMC. In an hourlong interview that aired Dec. 22, IMC viewers could not believe that there were bright prospects for reconciliation in 2015.

Bayik accused the government of foot-dragging and trying to gain time without seriously considering a negotiated end to the conflict. He made harsh accusations and employed belligerent language against the ruling Justice and Development Party (AKP).

However, he also proposed that the United States act as a mediator or intermediary during the peace negotiations. He said that Turkey should not reject US mediation since they are NATO allies. This suggestion was clearly a move to embarrass Turkey since the Erdogan government, which is seemingly allergic to internationalizing the issue, wants to keep the process a solely national affair.

Nonetheless, Bayik’s statements were in stark contradiction to the happy notes coming from HDP members of parliament and government circles.

Last but not the least, Murat Karayilan gave another confusing statement. Karayilan is the PKK’s No. 3 and a top military commander of Kurdish forces — not just those in Turkey but also those in Syria and Iraqi Kurdistan fighting the Islamic State.

As Karayilan spoke of how hopeful and impatient the Kurds are for a resolution prior to Turkey’s election, Karayilan spoke about the possibility of Ocalan gaining his freedom before April 2015. He told Rojnews, a Kurdish media outlet in Iraqi Kurdistan: “If the solution process reaches its goal, Abdullah Ocalan will participate in the April 2015 Congress. Most recently, Ocalan sent a draft to the government and us. We discussed it. We are ready for a solution of the Kurdish issue in that framework.”

He used a belligerent tone, adding: "If they [AKP] are sincere they must take steps. If they delay this approach, that will mean war. It will mean they will fight us after the election. They again want to eradicate us and solve the issue with war.”

Akdogan rejected Karayilan’s statement outright, saying such statements do not help the process.

With such conflicting statements, the public is even more confused. What can safely be said for 2015 is that the peace process will remain as fragile as ever. To prevent things from getting out of hand, our only hope is that both sides are acutely aware that they have much to lose from a total collapse of the talks.

Kurds are at the forefront of the battle against the Islamic State in Syria and even in Iraq. While there is a debate on removing the PKK from terrorist lists in the European Union and the United States, the PKK has no interest in reviving the armed struggle within Turkey and challenging the Turkish Armed Forces. For its part, the Turkish government — already suffering from myriad problems domestically and internationally — has no interest in further endangering the stability of the country in an election year. There is no point in pouring oil on the Kurdish fire.

There is mutual interest in not letting the talks totally collapse. But the question is how to preserve a volatile and fragile situation without doing anything.