Is Ankara headed toward all-out war with Turkey’s Kurds?

Unless a deus ex machina like the United States enters into the equation between the Turkish government and the PKK, the clashes between the sides will continue. 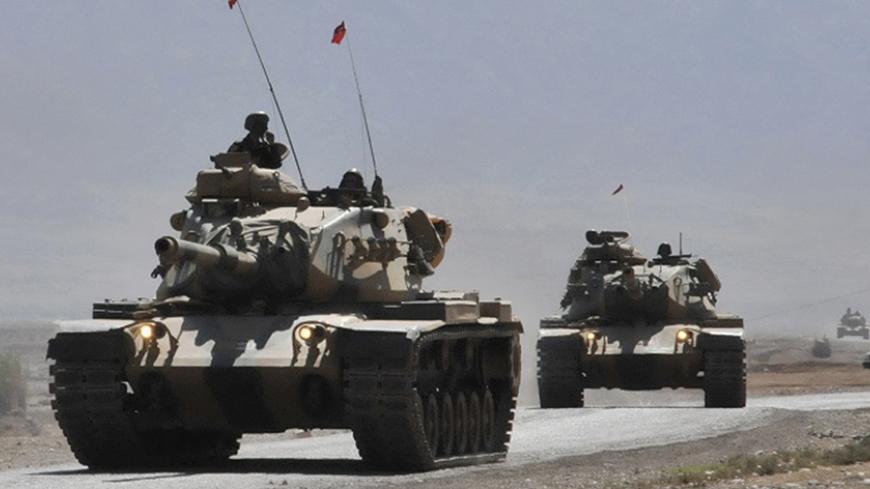 Turkish tanks move on a road outside the southeastern Turkish town of Silopi, near the Iraqi border, Oct. 9, 2008. - REUTERS

At the time of this writing, gunfire can still be heard in the frontier town of Silopi, which is 10 kilometers (6 miles) north of the Turkey to Iraqi Kurdistan Khabur crossing. The small town with its staunchly pro-Kurdistan Workers Party (PKK) residents is the venue of the latest flare-up between the Turkish security forces and PKK fighters. The skirmishes that took lives from both sides started after nightfall and continued through the next day, Aug. 7.

Turkish warplanes have been pounding the PKK bases and its headquarters in the Qandil Mountains in Iraqi Kurdistan, and the loss of lives, particularly of Turkish military personnel and policemen, has increased. Highways between provincial centers in the eastern part of Turkey are frequently closed.

For many people in and outside Turkey, the general feeling is, “We are back at square one!”

The situation is worrisome and reminiscent of the bloody years of the 1990s, when more than 40,000 lives were lost. The hopes that came with the peace initiative at the end of 2012 have been shattered. The hostilities have resumed between the Turkish government and the PKK, and each side blames the other for the collapse of the cease-fire.

The escalation of the conflict with the PKK and the pro-PKK Kurds started when Turkey opened up Incirlik Air Base to aircraft for the anti-Islamic State (IS) coalition. This was the first time Turkey took action against IS.

Yet, the fight against the PKK took the limelight, giving the impression that Turkey’s new stance against IS was nothing more than a smokescreen for an all-out war against the PKK.

In the first days of the ongoing bombing campaign against PKK targets, the Unites States was not critical of their Turkish allies and emphasized Turkey’s “right of self-defense” against the “terrorist organization,” the PKK.

However, Turkey’s reluctance to fight IS while being enthusiastic in fighting the PKK reached such a magnitude that US President Barack Obama sent a carefully worded message to Ankara.

The following from the Huffington Post is an interesting and striking story on this matter:

“The White House has warned the Turkish government that the war against the Islamic State in Syria must be ‘carefully bound’ so as not to go on the offensive against Kurdish fighters, President Barack Obama said Wednesday.

“The Kurds have been effective allies of the US as the only fighters to claim major and sustained victories against the Islamic State militant group. But Turkish President Recep Tayyip Erdogan, a hard-line nationalist, considers the Kurds in both Turkey and Syria to be enemies of the state.

“More importantly, Erdogan has suffered a political setback at the hands of the Peoples' Democratic Party [HDP], a Kurdish-Turkish alliance that won 80 seats in the recent parliamentary elections. Going to war against the Kurds could be a way for Erdogan to split the opposition coalition.

“The Huffington Post asked Obama if he was concerned that Erdogan would use the campaign against the Islamic State as an excuse to target the PKK. ...

“'Well, we’ve discussed with the Turks our strong view that [IS] … poses the largest threat to the region and we have to stay focused, [and our view] that to the extent the PKK engages in attacks against Turkish targets, it is legitimate for the Turks to try to defend themselves,' he said. 'But the agreement that we are working on is carefully bound around: How do we close off that border to foreign fighters entering into Syria? And everything we do will be based on that issue.'”

Parallel to the growing concern of the White House with the Turkish operations targeting the PKK, Turkish authorities for the first time in four months contacted two HDP deputies who were considered to be members of the HDP delegation regularly visiting Abdullah Ocalan, the PKK’s imprisoned leader who is serving a life sentence at Imrali island.

Nothing has been heard from Ocalan in four months, and nothing has been publicized about his state of affairs. No one — including his family members, his lawyers and the political personalities who have been among his regular visitors — has been allowed to visit him.

In an apparent move to de-escalate the dangerously evolving security situation in Turkey, Undersecretary of Public Security Muhammed Dervisoglu met with HDP Deputies Sirri Sureyya Onder and Idris Baluken and gave them some information on Ocalan. Nonetheless, the demand of the deputies to visit him was denied as the official told them that “while [PKK’s] guns are not silenced, that would not be possible.”

If that remains a precondition for visiting Ocalan, then the foreseeable future does not bode well. The PKK is not enthusiastic about silencing its guns in the very near future. Their approach would be keeping their hands on the trigger while keeping the doors open to contacts.

Primary among conditions for a cease-fire cited by the PKK leadership is to agree on a mechanism for negotiations. They sound adamant on having a direct channel between themselves and their imprisoned leader Ocalan.

Their very negative outlook on the current Justice and Development Party (AKP) government in Turkey is so profound that it would be difficult to overcome their suspicions. They strongly think that their fight with IS is actually a proxy war waged against them by the Turkish government, which they accuse of aiding and supporting IS.

Duran Kalkan, one of the founders of the PKK and who is among its top five leaders, emphasized this allegation clearly in an interview with the pro-Kurdish Firat News Agency (ANF) published Aug. 5. He also said that they had no plans to fight the Turkish military and described the PKK operations against the Turkish security forces as a “limited retaliation.” He ironically stated that the “guerrilla did not pull the trigger yet.”

About resuming the cease-fire, he said, “First, we have to be reassured of what would follow it. Otherwise, there is no point in it.”

More or less the same position was voiced by the highest PKK officials in Europe, Zubeyir Aydar and Remzi Kartal, on Aug. 6 following their meeting in Brussels with HDP co-chairman Selahattin Demirtas.

Aydar and Kartal blamed the government for the collapse of the cease-fire and the peace process. They said that until direct contact with Ocalan is established and his prison conditions are changed, there would be no progress toward a negotiated solution to the problem.

The PKK leaders of its European branch also called on the United States to provide “third-party mediation” between their organization and Turkey.

The same day, Murat Karayilan, who is No. 2 in the PKK and the supreme commander of its forces, in a long interview with ANF defied the Turkish government and said, “If they want to destroy us through war, they are most welcome; we are ready for it.” He added, “As long as the Turkish government cannot come up with new and serious proposals, the new situation that represents the end of the peace process cannot be radically different.”

The same points were stressed by Cemil Bayik, who occupies the highest position hierarchically in the PKK. An article in the pro-PKK Kurdish daily Azadiya Welat and its Turkish-language edition Ozgur Politika on Aug. 6 verified that the PKK will remain firm in putting forward certain conditions to go back to the negotiating table. Bayik said they are at the moment very far from the Turkish official demands laying down arms and decommissioning its militants.

Unless a game change occurs or a deus ex machina like the United States enters into the equation between the Turkish government and the PKK, the security situation will continue to be volatile and open to all sorts of “unintended consequences.”