The Transformation of Ocalan

Cengiz Candar writes that officials were once portraying Abdullah Ocalan as the “worst villain” and “greatest Satan,” but in the first days of 2013 Ocalan appears to have become “No. 1 partner” in efforts to resolve Turkey’s No. 1 problem. 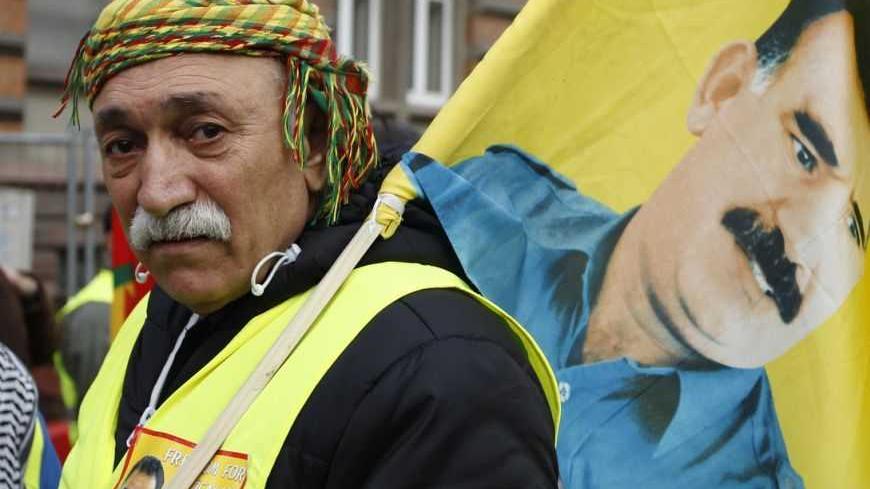 A demonstrator holds a flag with a portrait of jailed PKK leader Abdullah Ocalan in Strasbourg, Feb. 18, 2012. - REUTERS/Vincent Kessler

Had there been a survey to determine the world’s most confused nation, Turkey would have easily ranked first. There is every reason to justify the schizoid state of mind of the Turkish public, be they Turks or Kurds. Only a couple of weeks ago, the country’s prime minister was questioning why PKK leader Abdullah Ocalan, serving a life sentence since 1999 on Imrali Island near Istanbul,  had not been executed, while signaling that capital punishment could be reinstated.

Officials were once portraying Ocalan as the “worst villain” and “greatest Satan,” demonizing him publicly in the harshest terms at every opportunity. Things changed in the first days of 2013. Ocalan now appears to have become “No. 1 partner” in efforts to resolve Turkey’s No. 1 problem, namely the Kurdish conflict, which is increasingly taking on regional dimensions.

In other words, as of the first week of the year, Ocalan is no longer a part of the problem, but the man at the center of “the settlement process” Ankara pins its greatest hopes on to end the PKK’s nearly three decades of armed rebellion.

The only armed-struggle group older than the PKK today is Colombia’s FARC. And at a time when even FARC has sat down for talks with the government and raised unprecedented hopes for peace in Colombia, the PKK’s persistence to exist as an armed movement in the world’s most sensitive geopolitical region has stood out as “anachronistic.”

So, the inauguration of a fresh negotiation process with Ocalan, a man seen as a demi-god by all PKK cadres and many other Kurds, in a bid to persuade the PKK to lay down arms is an extremely important development for Turkey. The eventual success of this process will have significant ramifications for the whole region. 2013 may go down to history as a special year only for this single reason.

In fact, it is not the first time the Turkish state is talking to Ocalan. Ever since 1998 he has been accustomed to talks with the state, particularly with members of the military and the security bureaucracy. Some would ironically describe him as the person who “knows best the Turkish state from within.”

But this “new process,” launched in the first days of 2013, has one fundamental difference from previous ones: for the first time Ocalan stands as a “peace-maker” at the center of an initiative to resolve the Kurdish problem, and for the first time a political mechanism is being set up to achieve a settlement.

In the previous period — from 1999, when Ocalan was captured and imprisoned in Imrali, to the second half of 2010 — the authorities saw Ocalan as a “captive” and attempted to use him to eliminate the PKK. During that time, mostly generals talked with Ocalan. From 2007 on, the National Intelligence Organization (MIT) became his interlocutor. But the MIT-led secret talks were conducted predominantly with a delegation made up of PKK representatives from Europe and the Qandil Mountains of northern Iraq. MIT acted also as a coordinator between Ocalan, who remained behind bars at Imrali, and the negotiations, held mostly in the Norwegian capital Oslo under the observation of a third party, reportedly Britain.

The initiative, known as “the Oslo Process“ in Turkey, ended in failure in the wake of the June 2011 elections, resulting in a resurgence of violence reminiscent of the worst years of the conflict in the 1990s. In the meantime, minutes from some of those secret meetings were leaked on the Internet in an attempt to undermine Prime Minister Recep Tayyip Erdogan, who had taken a huge political risk by approving the talks.

The government claimed that the negotiating table in Oslo was “knocked over” by the PKK when its militants attacked an army unit and killed many soldiers in Silvan, near Diyarbakir, on July 14, 2011. Ankara moved to isolate Ocalan totally by cutting off all his contacts with the outside world, while returning to a military policy that aimed to deliver an irrecoverable blow to the PKK. The revival of the security-first policy inflicted further harm on Turkey’s already troubled democratic environment, sparking vocal criticism that the country was devolving into an “authoritarian regime.”

The PKK, for its part, blamed Ankara for the collapse of the talks, charging that the government had employed delaying tactics and abandoned the promises it made in Oslo once it won the June 2011 elections with 50 percent of the vote.

As a result, Turkey went through devastating times from the summer of 2011 to the autumn of 2012 when all hopes for the settlement of the Kurdish problem faded. Simultaneously, the turmoil in Syria degenerated into a civil war, and tensions in Iraq raised the specter of a similar civil war between Baghdad and Arbil, making the Kurdish problem an unbearable burden on the shoulders of the governing Justice and Development Party (AKP).

In 2014, Turkey will hold local elections as well as presidential polls, which Erdogan eyes as his next target. For the first time, the new president will be elected by a popular vote, which requires the winner to muster at least a 50-percent support.  This means that, from the second half of 2013, Turkey will enter a period of intensive electioneering.

Therefore, it was imperative for Turkey to step out from the gloomy climate that prevailed on the Kurdish question from the second half of 2011 to the end of November 2012. So, this was the framework of the political environment and timing of the new Ocalan-centered settlement initiative.

Finally, a “game-changer” was needed to transform the period that started in the second half of 2011 into the current “new process.” It came about in September 2012 with a hunger strike initiated by Kurdish prisoners.

The hunger strike began in the Diyarbakir prison and spread to about 60 other jails, with up to 700 inmates joining the protest. Their number abruptly shot up to 8,000 in November. Moreover, they were joined by several parliament members from the Peace and Democracy Party (BDP), among them Leyla Zana, the internationally renowned winner of the Sakharov Prize.

Just as the hunger strike was becoming a “death fast” and threatening to claim its first victims, Ocalan, mum for a year and a half, issued a written “order” for an end to the protest through his brother, who paid him a visit in prison. The hunger strike came to an immediate end.

It was obvious that the state had resorted to Ocalan’s services in order to take control of developments. Ocalan, for his part, demonstrated his “authority,” proved his clout and solidified his status as the leader of Kurdish political movement.

Beyond this, Ocalan proved to the Turkish public that he is a crucial political player.

At that point, MIT chief Hakan Fidan, who frequently met with Ocalan during “the Oslo Process” and is known to favor negotiations over the security-first policy, knew that his delicate plan had succeeded, namely, Ocalan had proven his influence over the PKK and the Kurdish political movement. Fidan then persuaded the prime minister on the need to launch negotiations with Ocalan to end the “armed rebellion” and resolve the Kurdish conflict.

Fidan at the same time is the Turkish official Ocalan trusts most.

Despite a certain level of resistance within the Turkish state and the government, “the new negotiation process,” based on ending Ocalan’s isolation and pinning him at the center of the settlement initiative, kicked off in the form of talks between Ocalan and Fidan.

The first development in this new process was unprecedented: on January 3 veteran Kurdish politician Ahmet Turk and the young female BDP lawmaker, Ayla Akat, went to Imrali and met with Ocalan.

It was the first time that Kurdish politicians visited Ocalan at Imrali since he was arrested and put there in 1999, allowed to meet only with security officials and his lawyers.

The meeting demonstrated also that negotiations with Ocalan have now gained a political dimension, along with the security one.

And even though their content remains confidential, the meetings ceased to be secret; for the first time they were announced publicly and took place before the public eye.

No foreign country is involved in the process this time. In a nation craving for a solution, almost no accusations of “treason” are being heard. Turkey’s top media mogul Aydin Dogan has issued instructions to his media outlets to “back the peace process” in their broadcasts and publications. Remarkably, Kemal Kilicdaroglu, the head of the main opposition Republican People’s Party (CHP), a habitual opponent of every step the ruling party takes, has made an encouraging statement: “We are giving the AK party fresh credit. Resolve the problem!”

The most significant reaction came from Murat Karayilan, the PKK’s highest-ranking leader after Ocalan and its military commander in the Qandil Mountains. “The fact that Ahmet Turk and Ayla Akat went to Imrali and had a meeting [with Ocalan] has certainly added credibility to this negotiation process. This is a new dimension, which we deem important. One should carefully follow this process without underestimating it. However, these developments do not yet mean that a new settlement process has begun. The coming days will show whether or not those meetings and dialogues evolve into a settlement process on the Kurdish conflict. Currently, we can talk [only] of consultations. More input is needed for a new process,” he said.

The tone of Karayilan’s statement suggests that the PKK is holding its cards close to their chests, but that their hand is quite flexible. Undoubtedly, PKK resistance to the “new process” will be broken if Ocalan assumes a more visible and active role, and if his communication with the organization is strengthened.

Still, the elements of resistance within the PKK should not be underestimated since the organization has footholds in Iran and Syria, and is capable of reaching out to various countries. Nevertheless, there is no one more influential than Ocalan to overcome this resistance.

The climate of optimism that has prevailed in Turkey since the beginning of the year remains quite fragile due to the nature of the Kurdish conflict and difficulties stemming from the polarization in Turkish society. The process must be handled with care as one should keep in mind that it is vulnerable to any kind of provocations and sabotage.

But, if there is a new game in town (in Turkey), that’s it: A new process centered around the usual villain, a would-be hero, Abdullah Ocalan.