How Erdogan will spin his deal with Israel

Although Israel did not meet Turkish President Recep Tayyip Erdogan's top condition of lifting the Gaza blockade, Erdogan is still hailing the reconciliation between the countries as a major win. 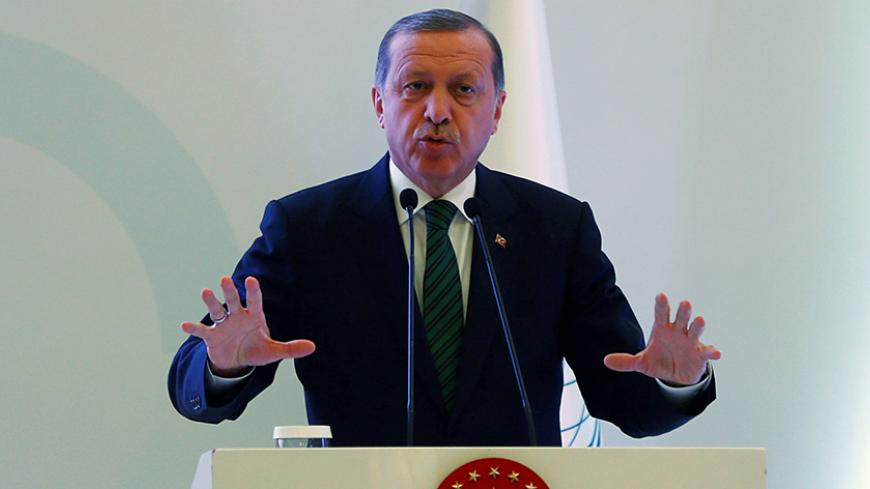 Turkish President Tayyip Erdogan makes a speech during a conference in Istanbul, Turkey, May 17, 2016. - REUTERS/Murad Sezer

During his 20-plus years in various political offices, Turkish President Recep Tayyip Erdogan has been both the hero and the goat. It remains to be seen which role he will assume now that Turkey and Israel have announced the conditions of their reconciliation after 16 years.

As prime minister, Erdogan's silencing of Israel's then-President Shimon Peres with his now-historic “one minute” demarche at Davos 2009 accrued him vast prestige and delighted many people in the Middle East. In 2011, on the walls of three Palestinian camps I visited in Lebanon, I saw posters saluting Erdogan as a hero.

In 2010, had Turkey crashed through the Israeli blockade of Gaza with the Mavi Marmara flotilla, Erdogan would have been lauded as the long-awaited leader by the Islamic world. But it didn’t work out that way. Israel raided the boat and killed nine people on board (one more person died of injuries four years later). Turkey responded by saying it would take five measures against Israel:

But behind the cloak of tension and friction, affairs were not all that bad between Ankara and Tel Aviv. In 2010, Turkey removed its veto on Israel’s membership in the Organization for Economic Cooperation and Development. That was followed by abolishing the veto on Israel’s participation in NATO exercises. Military cooperation continued behind the scenes. Trade with Israel mushroomed. Both countries were committed foes of the Syrian regime.

But for Islamists, Erdogan was still the lead fighter for Palestine.

Now, as events in Syria have not gone as planned, Erdogan was forced to say in January, “Israel needs a country like Turkey in the region. We also must accept that we need Israel.”

Turkey, which entered the regional scene with the slogan of “zero problems with neighbors,” quickly ran out of friendly neighbors. Considering the problems it also had with the United States and European Union, Turkey realized that reconciliation with Israel was imperative. To get Turkey out of isolation, Erdogan had to revert from using accrued prestige to the classical diplomacy he resents so much.

Israeli Prime Minister Benjamin Netanyahu had already apologized in 2013 for the Mavi Marmara incident under pressure from US President Barack Obama, and an agreement was reached for $20 million compensation. The only remaining condition was the lifting of the Gaza blockade. But this condition was not fulfilled and Israel’s conditions prevailed. Finally, a reconciliation agreement was made public June 27 and signed June 28.

Under the agreement, Turkey will be able to provide humanitarian aid to the Gaza Strip. However, Israel, which has never agreed to lift the blockade, demanded the humanitarian assistance must first go to Israel’s Ashdod port for security inspections. Israel thus got what it wanted and Ankara had no choice but to concede.

Another issue Israel was concerned with was Turkey’s legal cases against Israeli soldiers and officials responsible for the attack on the boat. Turkey agreed to scrap all such cases.

What else did Israel get?

Turkey didn't mention the stipulations that favor Israel, but the Israeli daily Yedioth Ahronoth listed them:

The agreement is subject to ratification by the Turkish parliament and approval by the Israeli Cabinet.

While defending the agreement with Turkey, Netanyahu noted that Hamas activities, including collecting donations, will be banned in Turkey. He emphasized the energy-related aspects of the arrangement, saying they will have enormous benefits for Israel's economy.

Although the Israeli right wing is complaining of major concessions to Erdogan, who had just welcomed Hamas leader Khaled Meshaal, Netanyahu’s lofty expectations overrode them all.

The only stipulation that will facilitate the "sale" of this agreement to the Turkish public is Israel’s permission to allow Turkey to build a water purification system, a power station and a 200-bed hospital in Gaza and industrial parks at the Jenin and Erez crossings.

So Turkey is volunteering to pay for a humanitarian disaster that Israel inflicted. But as it is a humanitarian issue, nobody can oppose it. Palestinians have no choice but to say they're happy with it.

Will there be a political cost for Erdogan, who until now played with the emotions of his constituents by saying things like “Israel and Turkey cannot normalize relations until cruelty ends”?

The reality is that although Islamists might not be happy with it, the government’s public relations mechanism is capable of spinning a story of victory from all of this. Look at how Erdogan handled it: He first hosted Hamas leader Meshaal and then telephoned Palestinian President Mahmoud Abbas about the developments, giving the impression that he had the blessings of the Palestinian side. A clever move!

According to Turkey’s pro-government media, which presented the deal with Israel as “Gaza can now breathe,” there are no conditions about Hamas.

But as we saw when Turkey deported Hamas notable Saleh al-Arouri, measures against Hamas were already in progress as the negotiations with Israel were continuing. To make life easier for Erdogan, Hamas had no choice but to do its duty and express its gratitude.

In his first assessment, Erdogan evaded addressing the blockade and presented the easing of the embargo as the end of the blockade. Erdogan announced the good news that 14 tons of humanitarian relief will reach Gaza before the Eid al-Fitr holidays marking the end of Ramadan, saying, “Our Palestinian brethren will celebrate a second holiday. We did all this in consultation with Meshaal and Abbas.”

Nobody remembered that Abbas had asked for the coordination of Turkey’s relief efforts not with Hamas, but with the Palestinian Authority.

As if primed by someone, the pro-government media of Turkey began penning analyses on how an alliance of Turkey, Israel, Saudi Arabia and Qatar was being shaped for the stability of the Middle East.

But what about the victims? Turkey’s IHH Humanitarian Relief Foundation, which collaborates with the Syrian government and had organized the Mavi Marmara flotilla, bluntly declared its opposition to the deal with Israel. IHH issued a statement saying, “This agreement means Turkey’s recognition of the Gaza blockade. The court cases [against Israel] were not only by the families of martyrs, but 37 other victims. These cases won’t be dropped. We hope that the parliament will not approve such an agreement, which would mean amnesty for murderers."

It concluded its statement with the Palestinian saying “Those who cover themselves with Israel will end up naked.”

Nevertheless, except for a narrow segment that truly identifies with Palestine, Erdogan’s devoted constituent base is ready to listen with pride to the saga of success he has drafted for them.