The real danger for the Turkish prime minister is in the warning signs of the economy. 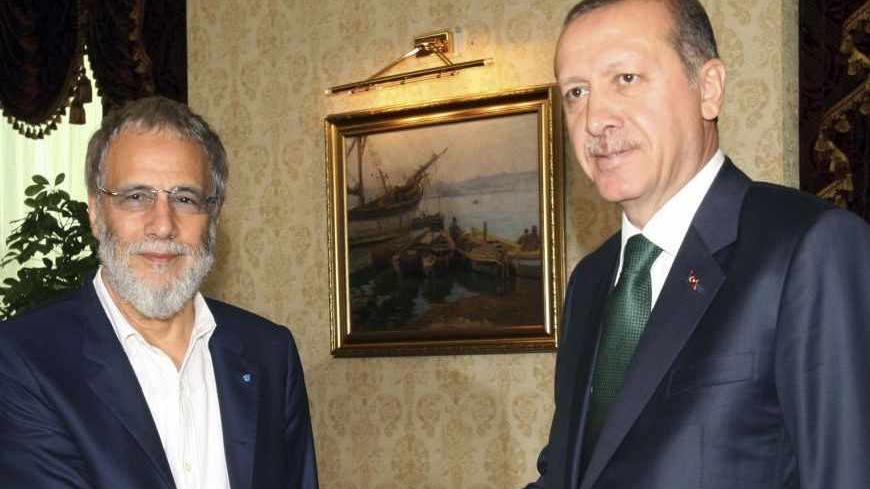 It has been a tumultuous summer for Turkey's Prime Minister Tayyip Erdogan (R). Perhaps providing a break from all the weighty policy issues at hand was his meeting with Yusuf Islam (L), formerly known as Cat Stevens, in Ankara, Aug. 2, 2013. - REUTERS/Umit Bektas

Summer 2013 has become a major milestone in the career of Turkey’s popular and populist Prime Minister Recep Tayyip Erdogan. The Taksim-Gezi Park protests that broke out in Istanbul at the end of May, beginning of June have made Erdogan tenser than ever. Some of his domestic allies have abandoned him. But the prime minister, with an amazing display of energy, hit the road, organized mass rallies and began to challenge all opposition with hard-line polemics.

The tremors in Turkey were followed by the events in Egypt, the toppling and detention of Egyptian President Mohammed Morsi in a military coup, removal of the Muslim Brotherhood from power and then massacres of Muslim Brotherhood supporters in Cairo’s two squares.

In a word, Egypt was an outrage for Erdogan. The loudest voice against the coup was his. His fury was not confined only to the Egyptian coup-makers and Gen. Abdel Fattah al-Sisi. Led by Europe, the entire West got its share of the Turkish prime minister’s indignation and defiance. He went after not only the states but institutions such as the United Nations, the Security Council and particularly its five permanent members.

In short, summer 2013 did not start well for Erdogan, it didn’t move along well and might even end up worse, if you add the anticipated developments in Syria.

Perhaps the real danger for Erdogan is the anxiety-provoking signals from Turkey’s growing and stable economy, which until now was credited to him despite all his erratic moves and utterances. The Turkish lira, which divested itself of six zeros and became a robust currency with a decline in inflation under Erdogan, last week for the first time crossed the "psychological line” of 2 liras to a US dollar. This is a bad omen for inflation.

Some attributed these negative economic signals to Erdogan’s recently stepped-up declarations, which are interpreted as anti-Semitism. The Turkish economy’s worst drawback has been the current account deficit. This is kept under control by the entry of hot money, which means short-term borrowing. Any interruption in the flow of hot money to Turkey will be seen as a most serious economic warning signal.

There is now a widespread conviction in Turkey that the Turkish prime minister’s assuming a fervent Islamist outlook; his taking on the role of defender of the Egyptian Muslim Brotherhood even more than an Arab Islamist; his anger toward the West and even the United States; and, worse, his declaring Israel as being behind the military coup in Egypt, have brought about raise eyebrows in international money circles.

Erdogan hinted that an Israel-related "interest lobby” was behind the Taksim-Gezi events and one of his associates found “the Jewish Diaspora” behind the incidents. Despite adverse reactions to such charges in the international arena, he went on to link Israel to the Egyptian coup and said he had documents to prove it. His proof was a 2011 video recording of French Jewish philosopher Bernard-Henri Levi talking negatively about the Muslim Brotherhood rule of Egypt in a panel discussion, which was also attended by the current Israeli Minister of Justice, Tzipi Livni (then in the opposition). This claim generated more than expected harsher reactions from all over, but mostly in the Western media.

Inevitably, a perception of Erdogan as an anti-Semite gained ground. It is curious that Erdogan and his associates, instead of trying to erase this perception in the West, opted to create a personality cult around Erdogan’s name.

Although Erdogan’s name appears to have lost most of its glitter in Turkish and world opinion, the limitless flattery of his partisans at home gains momentum.

But none of that flattery reached the level of what appeared in the daily Takvim of Aug. 26 that insinuated Erdogan “was dispatched by Allah” and was full of tributes that could only be used for prophets. This is what Takvim, a newspaper of the media group whose flagship is the daily Sabah, said about Erdogan:

"At the beginning of each century, one of them is tasked from the realm. He makes up for whatever is missing in the country, solves problems, arranges everything, kneads like dough. They were sent at the beginning of the 1900s and 2000s perhaps without even knowing that they were dispatched on such a mission. They were sent to be among mortals, sent to the front lines to ensure the existence of the country until the next century, given a seat and were laden with intense, sacred duties. Those who had returned to where they come from after completing their tasks are remembered with gratitude. The current one is wished a long life with feelings of appreciation.”

Yasin Aktay, an academic serving on the executive council of Erdogan’s AK Party, in his daily Yeni Safak column praises Erdogan as a "principled world leader.” He says: "We don’t how accelerating developments in Syria will end, but it is obvious that the world’s advanced democracies are suffering from major value deficits from Egypt and Syria. This loss is dragging not only themselves but those countries who follow their line to a morass. Never mind those who say Turkey is becoming increasingly isolated because of its principled attitude. It is still the only actor with the fuss it makes reminding all others that another world is feasible."

To reinforce the validity of these views, Aktay quotes what Pakistan’s daily Jang wrote about Erdogan: "Turkey’s Prime Minister Recep Tayyip Erdogan is a leader of the Islamic world who is accepted not only in Turkey but in the entire Muslim world. He is perceived as the savior of the Islamic world. He has provided the Islamic community with emotion and excitement-laden language that illustrates how the Islamic world is awakening. Erdogan has won a new spirit for the Muslims. From now on, the Muslims are looking at Erdogan instead of their own leaders. They are aware that if there is a Muslim leader who speaks out for the interests of Muslims, that leader is Erdogan. Erdogan is fully armed with the art of speaking while looking into the eyes of Western leaders."

Ibrahim Karagul, editor-in-chief of the daily Yeni Safak, on the same day wrote that Erdogan’s comment on Israel being behind the Egypt coup was “right on the spot” and added:

"Israel was involved at every phase of this coup. Its own concerns, its regional calculations, Arab-Israel questions, the Palestine issue and the dangers that will posed by emerging political powers that will not be under Western control are causes of panic for Israel. Let’s assume that the Muslim Brotherhood is the main partner of the regime in Egypt. In 10 years, in Syria, Sudan, Jordan and many other countries, Islamic bodies such as the Muslim Brotherhood will march to power. How will Israel feel in such an environment? That is the question." Karagul was possibly reflecting a view shared by Erdogan.

But one has to admit that the most striking and interesting assessment of Erdogan in recent days was in the Russian newspaper Komsomolskaya Pravda. The article says Erdogan, who many compared to Vladimir Putin because of his style of governance, will be saved “by becoming friends with Russia.” It advises Erdogan to establish friendly relations with Russia and says, “Russia can extend a hand of friendship to Erdogan and rescue him."

But there is a precondition: Erdogan has to make U-turn in Syria and come to the Russian line.

Komsomolskaya Pravda’s Aug. 26 article appeared on  the T24.com.tr Turkish website and also on the Rusya Analiz website of the article’s author, Israel Shamir, in Turkish under the title, "Is it time to assist the Turkish prime minister?" Its most striking passage was:

"Erdogan noticed that Israel supported the military coup in Egypt and activated its agents in Turkey. He could hardly have missed it. The major Israel newspaper Jerusalem Post had compared Erdogan with Hitler and [former Iranian President Mahmoud] Ahmadinejad while extolling the Egyptian coup leader Gen. Abdel Fattah al-Sisi to high heaven as the savior of his people. Erdogan realized that the Israel-US-Saudi axis wants to topple him and his party and hand over the political rule in Turkey to NATO soldiers. It was a blessing that Erdogan was able to have many generals detained and imprison them for life. Otherwise they would have eliminated him long ago. His cooperation with the United States and Saudi Arabia and his support for the Syrian uprising cost Erdogan heavily. According to many Western analysts, Erdogan’s days are numbered.

"Critical moments for Russian diplomacy in the Near East are approaching. Russia can extend Erdogan a hand of friendship and save him. But he has to change Turkey’s position on Syria. Anyway, that became inevitable after the turmoil in Egypt. Erdogan lost the Syrian gamble but that is not the end of the world. He can still be saved by becoming friends with Russia."

Aren’t these lines enough of an indication how fateful 2013's summer is for Erdogan?