Istanbul lost its bid for the 2020 Olympics, but Erdogan may have lost more. 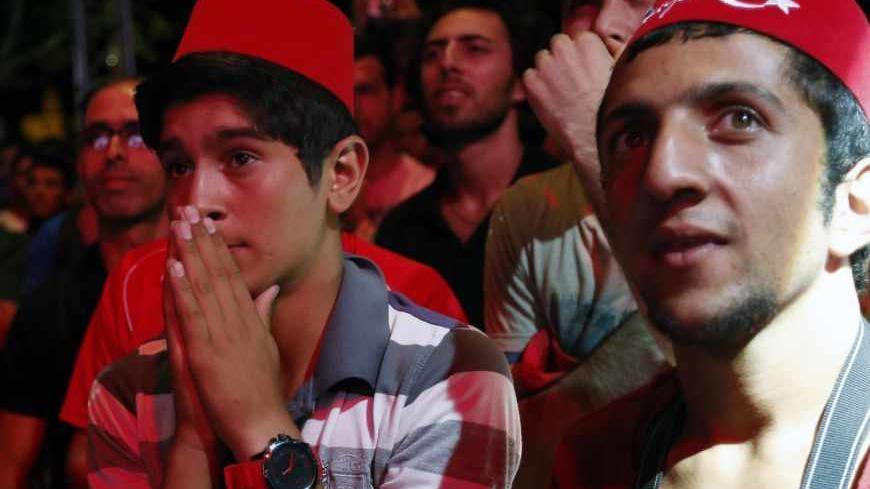 Turks react after finding out that Tokyo was awarded the right to host the 2020 Summer Olympics as they watch it live on big screens in Sultanahmet Square in Istanbul, Sept. 7, 2013. - REUTERS/Murad Sezer

Turkey came to a standstill at about 11 p.m. Saturday [Sept. 7]. Like Turks all over the world, we were all waiting for the news. On that day, Turkish Airlines broke its longest nonstop flight record of 13½ hours between Istanbul-Los Angeles by flying 16 hours nonstop between St. Petersburg and Buenos Aires. It flew Prime Minister Recep Tayyip Erdogan, with his wife and daughter, from the G-20 Summit to the International Olympic Committee (IOC) meeting in Buenos Aires. Erdogan went to lobby for Istanbul to be selected as host city of the 2020 Summer Olympics. He addressed the IOC to vote for Istanbul and apologized to his wife and family for his “love for Istanbul and sports.’’

There was optimism in Turkey that they would get the good news. Istanbul’s historical Sultanahmet Square was packed with people at about 11 p.m. in front of giant TV screens transmitting live from Argentina. No doubt that had the news come as ‘’Istanbul 2020” there would have been jubilation. Everything was ready for it.

Actually, such optimism was not misplaced. Istanbul was a candidate for the Olympics for the fifth time, and it had never been so close. It had only Madrid and Tokyo remaining as rivals. Spain was having a tough time with its economic crisis. Moreover, Barcelona had hosted the Olympics as recently as 1992. Tokyo was assumed to be preoccupied with cleaning the traces of the environmental disaster at Fukushima nuclear power station that is recognized as the second worse environmental nightmare, only 155 miles away. Tokyo had already hosted the 1964 Olympics. Istanbul, the only city that links Europe and Asia, would have been the first Muslim host of the Olympics. Everybody felt that this truly magnificent and unique city that had served as capital of two empires in history deserved it.

All the Turks who preceded Erdogan to Buenos Aires, from the Istanbul mayor to the minister of sports to the Turkish Olympics Committee members and everybody else, had agreed: "Istanbul will win because it deserves to."

What if it doesn’t?

Of course, there was a small likelihood that Istanbul could lose. Egemen Bagis, the minister for EU relations, had already identified the culprit of such an unthinkable negative outcome by declaring that the responsibility will be with “Taksim Gezi protesters.''

As the clocks neared 11 p.m., excitement in Turkey peaked. In the first round of voting, Tokyo received 42 votes and Istanbul and Madrid both got 26 votes. In the tiebreaker between Istanbul and Madrid, Istanbul got 49 to Madrid’s 45. Istanbul was the finalist.

Tokyo won the final, 60 to 36 votes. Those filling Sultanahmet Square in Istanbul couldn’t believe it. They overwhelmed the social media with messages reflective of a truly polarized society. Erdogan’s dedicated opposition seemed to be glad with the negative result. With messages laden with sarcasm and irony, they were saying Istanbul has been rescued from hosting the 2020 Olympics. Of course they were delighted that the Erdogan was denied a victory saga that he would be boasting with forever. It wasn’t long before the social media became the venue of bitter polemics.

Credible media organs of the outside world were noting that Erdogan had a personal part in Istanbul’s defeat. In the early hours of the morning outside the Buenos Aires Hilton Hotel where Erdogan stayed, protesters carried placards that read, "Never mind the Olympics, punish the murderers of five people killed at Gezi" — as a reminder that before Istanbul 2020, Erdogan still has to deal with Istanbul 2013.

The New York Times online, while reporting Tokyo’s win as ‘’breaking news,” noted that Erdogan’s harsh attitude and authoritarian style against Taksim-Gezi protesters may have played an important role in the IOC’s decision to prefer Tokyo over Istanbul.

The Times slightly modified its news on Sept. 8: “Some IOC delegates had expressed reluctance trying to forecast Turkey’s political situation seven years from now, given regional instability, what some critics in the country call the autocratic governing style of Prime Minister Recep Tayyip Erdogan, and a divide between secularists and Islamists. … For the International Olympic Committee, environmental concerns in Japan appeared less urgent than the Syrian war on Turkey’s border, a harsh crackdown against antigovernment protesters recently in Istanbul and Spain’s economic recession and high unemployment.”

The specter of Gezi, apparently, must have been on the Buenos Aires vote, because right after Tokyo won it, name-calling and accusations with reference to Gezi events started back in Turkey. A strongly pro-Erdogan mouthpiece — daily Yeni Safak of Istanbul — under the heading “İngiliz Oyunu” [British ploy], blamed Reuters for publishing photos of Istanbul with Gezi protesters on the day of the vote.

Daily Aksam known to be close to the government in his Sept. 8 edition under the title “Chapulcus Happy” [referring to Gezi Park protesters] said, “The groups that have been opposing Istanbul’s candidacy [for the 2020 Olympics] at every possible opportunity have achieved their goals.’’

An excerpt from Yeni Safak:

‘’Photographs of Istanbul distributed by British news agency Reuters hours before the final vote for the 2020 Olympics and Paralympic Games were a reminder of the 'British ploy.' Reuters’ Istanbul coverage a few hours before the crucial vote with competing Madrid and Tokyo caused reactions. Reuters’ photographs distributed to its worldwide subscribers about Turkey and Istanbul have generated a debate. The news agency did everything possible to affect Turkey’s image negatively. To allot space to events in Istanbul among the photographs illustrating the city prompted question marks. Photographs related to Gezi protests were noticeable.’’

It's now clear that the Gezi protests will resurface in Turkey’s agenda once again in relation to 2020 Olympics voting and provide the grounds for new tensions and polemics between Erdogan and his opposition.

Apart from probable new tensions and polemics, Istanbul’s loss of the 2020 Olympics is likely to be more of a political loss for Erdogan. Before the Taksim-Gezi events, there was already talk of a downward trend of Turkey’s uncontested prime minister who had acquired a larger-than-life status. Erdogan was trying to assure his future status by the mega projects he was promoting led by Istanbul 2020 Olympics. That is why Istanbul’s defeat by Tokyo and suggestions that his harsh attitudes and autocratic tendencies had a part in that loss could well be an omen of darkening clouds over Erdogan.

“When I heard the name Tokyo, I was so touched, overwhelmed,” The New York Times quoted Shinzo Abe, Japan’s prime minister, as saying. “The joy was even greater than when I won my own election.”

You may try to rewrite this passage thinking of just the opposite about Erdogan, and replace “Japan” with "Turkey" and Shinzo Abe with Erdogan.

If Istanbul had won, the following lines might have appeared in the Times: “These Olympics will give RecepTayyip Erdogan a chance to feel reborn, to show  his ardent supporters that his power can still be vibrant.”

Yet, the fact is: Tokyo won the Olympics 2020; Erdogan lost.