The peace process with the Kurds will either be a fatality of the Taksim-Gezi events, or a lifeline for Prime Minister Recep Tayyip Erdogan. 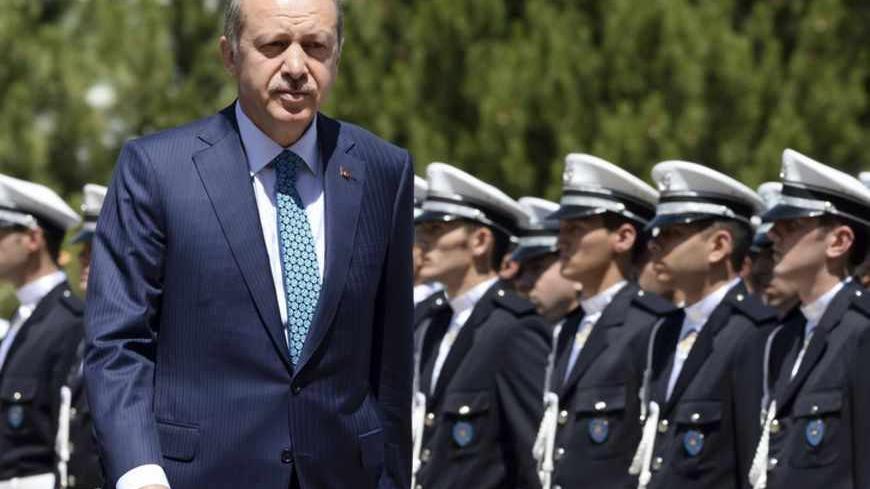 Turkey's Prime Minister Recep Tayyip Erdogan reviews students of the Police Academy upon his arrival at their graduation ceremony in Ankara, June 24, 2013. - REUTERS

It has been 10 days since police evicted the protesters from the Gezi Park adjacent to the square with an unprecedented pepper gas attack, but Turkey is still living with the trauma of the first three weeks of June.

Erdogan seems to be on a national tour. He orates at least once a day but, as if playing the same tape, he is repeating the same sentences. More than 80% of his speeches are about what the Gezi Park protests triggered from the center of Istanbul and that spread to 79 out of 81 provinces of the country. Last weekend he spoke at Kayseri in the center of Anatolia, Samsun on the Black Sea and Erzurum in the east.

While addressing the graduating cadets at Ankara Police Academy on Monday, June 24, he praised the police — who have been much criticized for disproportionate use of force — and described the events as an "epic of police heroism." One day before, at Erzurum, Erdogan said he had personally ordered the police to clear Gezi Park from "forces of occupation."

The vice chairman of the main opposition Republican Peoples' Party [CHP] Sezgin Tanrikulu, known for his sensitivity to human rights issues, was quick to comment on Erdogan’s words: "If you deem those in Gezi Park as forces of occupation, you will be leaving behind ‘an epic of Erdogan’ with five dead, 11 blinded and hundreds of wounded."

Obviously, Taksim and Gezi will leave indelible marks on Turkey's political climate for an unpredictable length of time. May-June 2013, Taksim-Gezi Park is likely to be remembered as a "breaking point" in Turkey’s political life.

Developments did not only mar the personal chemistry of Erdogan and tense up the entire country, they also cast heavy shadows on EU-Turkey relations.

EU-Turkey relations, which have been troubled for a while, seem to have suffered a fatal blow following the sharp reactions of the prime minister and Egemen Bagis, the minister responsible for EU relations. German Chancellor Angela Merkel, who appears to be trying to come up with a pretext to block Turkey’s access to the EU, is likely to obstruct opening negotiations with Turkey.

While Turkish officials were attacking Merkel with derogatory language, Turkey’s ambassador in Berlin and Germany’s ambassador in Ankara were summoned to the respective foreign ministries, further straining bilateral relations. The well-known, influential German newspaper Frankfurter Allgemeine Zeitung went outside its norms and, under the headline “Bagis, Erdogan’s dog on a leash,” printed an article about Turkey’s minister in charge of relations with the EU.

Taksim and Gezi Park events are going to have a role in determining the foreign policy of Turkey as much as its domestic politics.

The ruling party leaders who totally lost their bearings during the events —and above all Erdogan, who turned the government’s response to a full-fledged "one-man show" — did not stop at accusing "global forces" and "foreign centers" of being behind the developments but named everyone from CNN International to the BBC to Reuters.

The "war" declared on the outside world brought with it the inevitable pumping up of nationalist sentiments internally. Erdogan’s mass rallies organized in different corners of the country with full mobilization of the AKP organization resemble a forest of flags. The prime minister is planning to consolidate all shades of the right wing around himself with the hope of forming a new nationalist-conservative coalition against "foreign plots" he believes or was led to believe or wants to believe are against his government.

This is why he is playing on the symbols the traditional right wing reveres.

One of those symbols is the flag. He called on everyone to raise a Turkish flag and launched the campaign by hanging one on his residence. Erdogan has one more proposal on this issue: To hoist the three-crescent Ottoman flag alongside Turkey’s star-crescent flag. The flag with three crescents happens to be also the flag of the Nationalist Movement Party of Turkish nationalists.

A major segment of the people asked to join the "conservative-nationalist" campaign with such symbolism doesn’t know one hard fact: Today’s Turkish flag hasn’t changed for 200 years. The flag with three crescents goes back to earlier centuries.

What is most feared in this murky atmosphere is the possibility of the tension that is prevailing in all corners of the land following the Taksim and Gezi Park events of delivering a fatal blow to the "peace process."

What is meant by the "peace process" is the process that was leading the way to solution of the most important and most urgent problem of the country, the Kurdish issue. This process has three declared phases:

1.     Silencing the guns, withdrawal of the PKK armed elements from Turkey and moving to Iraqi Kurdistan;

2.   With the changes to be made in the constitution and laws opening the way to a political settlement of the Kurdish issue, and defining the legal framework of solution;

3.   Normalization, that is the PKK’s reaching the point of dissolving itself and burying its guns eternally and the PKK’s integration to Turkish politics with an amnesty and similar moves.

The widespread belief is that the first phase is mostly completed.  More than half of the PKK have left Turkey and others are on the way out. But there is not the slightest indication of any steps taken for legal and constitutional amendments on the way to democratization. The government has not even verbally committed itself to these.

Kurds are considerably perturbed. They expressed their unease by saying, "We have done our bit, now it is the government’s turn," followed by detailed statements from Abdullah Ocalan from his prison and his military commander at Kandil mountain, Murat Karayilan, and most recently, remarks of the Peace and Democracy Party [BDP] co-chair Selahattin Demirtas.

A BDP delegation said they met with the government and submitted a 25-item proposal package. The government now has list of legislative moves it has to undertake ranging from the prison conditions of Ocalan, to reduction of the election threshold from 10% and the changes that have to be made in Turkish Penal Code and Combating Terrorism law.

It may sound a bit exaggerated to talk of a government. The sole and final decision-maker on this issue is personally the prime minister. One wonders what Erdogan will do now that his hand is stronger with the withdrawal of the PKK from Turkey.

Will he deal with his stronger hand for a wider democratization to solve the Kurdish issue that will gain him enormous advantages especially in these most difficult days of his political career? Or, will he feel emboldened with his stronger hand and ignore the steps that will satisfy the Kurds but will get him into trouble with the nationalists just as he is courting them to form a new mass coalition?

This is a very serious question mark. It is a tough junction for Turkey and a dilemma for Erdogan.

Not much time is needed to find out the answer. It will come in a short time.

Cengiz Çandar is a contributing writer for Al-Monitor's Turkey Pulse. A journalist since 1976, he is the author of seven books in the Turkish language, mainly on Middle East issues, including the best-seller Mesopotamia Express: A Journey in History. He is currently senior columnist of Radikal in Istanbul.