Is Turkey losing its bearings by denouncing independent media, including Al-Monitor, as “subcontractors for the Zionist lobby?" 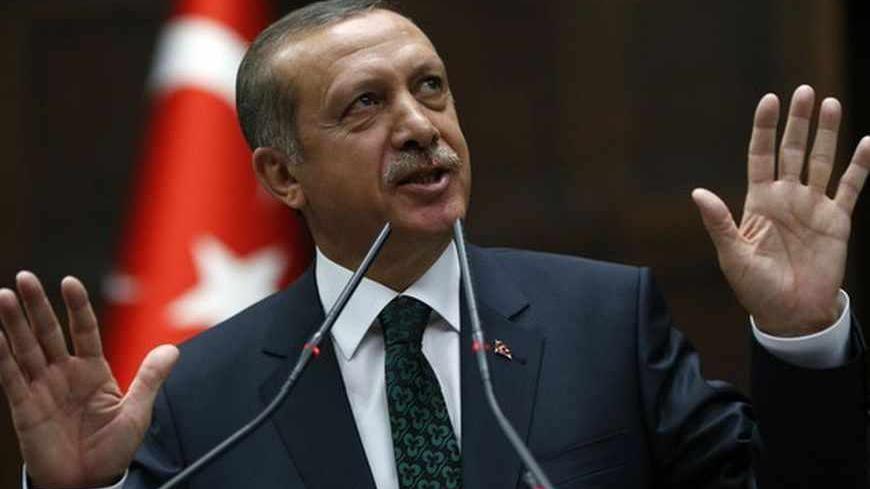 Turkey's Prime Minister Recep Tayyip Erdogan addresses members of parliament from his ruling Justice and Development Party (AKP) during a meeting at the Turkish parliament in Ankara, June 25, 2013. - REUTERS/Umit Bektas

It has been a month since the eruption that broke out at Gezi Park in Istanbul spread to many cities in Turkey. But tectonic tremors and aftershocks still continue. The political rule, although not under threat, has lost a lot of face, and it is doubtful whether it will ever get it back. Turkey’s recent history is now divided into pre-Gezi and post-Gezi periods. With each passing day, the political leadership seems to become less able to correctly diagnose any development.

The mistakes that were made at Taksim Square and Gezi Park were repeated on June 28, when in the Lice township of Diyarbakir province a group of 200 to 250 Kurdish villagers were strafed protesting the construction of a military outpost in the town. On June 29, this time in Diyarbakir, security forces tried to head off demonstrations by using pepper spray and water cannons against protesters. Remember how quiet it was in Diyarbakir and in Turkey’s Kurdish regions during the Istanbul protests? It was calm there — so much so that police vehicles were transferred from the Kurdish regions to Istanbul.

Prime Minister Recep Tayyip Erdogan — who for the past month has been pouring oil on the fire every time he opens his mouth — spoke out on July 2 about the Lice incident, which resulted in the death of one person and the wounding of 11 others, two seriously. He claimed that “hashish and Indian hemp" were behind the Lice incident.

Lice, one hour north of Diyarbakir, is known as a center of Kurdish nationalism, and much of its populace has emigrated under heavy pressure from the town. Even if the planting of hemp in empty fields could be a product of unemployment and lack of labor, it is unlikely that this form of agriculture could be sustained without the knowledge of the soldiers stationed there, who outnumber the town's residents. Lice has a population of 5,000, but there are 15,000 soldiers around it. The production of Indian hemp, its transport and trading is not feasible without the knowledge of the state. Erdogan’s accusation of the people of Lice being involved in narcotics over the incidents is yet another irrational diagnosis of developments that could have serious political and security ramifications.

The media that has been subjected to increasing irrationality by a government that has become demoralized by the Taksim-Gezi events. As the national media is widely under the control of the government and has lost much of its independent identity, now the international media is being targeted by rhetoric with perceptibly nationalistic undertones.

During the Taksim-Gezi events, Erdogan personally named CNN International, the BBC World Service and Reuters as inciters of the unrest. His deputy Besir Atalay accused the Jewish Diaspora of being behind the incidents, adding an anti-Semitic tone to the accusations directed at “foreign forces.”

Meanwhile, Al-Monitor has been hit by its share of the defamation campaign. Of course, along with Al-Monitor, those who regularly write for it from Turkey are also targeted, with my own name at the top of the list.

While the upper echelons of Turkish politics were “unearthing the foreign forces” behind the Taksim-Gezi events and while a key official added the Jewish Diaspora to the list of enemies, one of the media organs under government control decided Al-Monitor also belonged there. A website called Medyagundem said to be under the supervision of Sabah, the biggest daily controlled by the state, and accused Al-Monitor on June 28 of being a "subcontractor of the Zionist lobby.”

"There is a website called Al-Monitor. It is a platform that translates news and comments from Turkish, Arabic, Kurdish, Hebrew and Persian. Obviously, it is a costly operation. You can find local language articles in English on this site. Its selections of news and articles is meticulously made and is highly professional. Its main theme is the news and analysis that will serve the interests of Israel and the global Zionist network. The site's stated goal is to tell the Western world about the Middle East. They have only one condition while doing that. Works of anyone who is a sworn enemy of Islamists and conservative administrations and actors are translated immediately into English. In addition to translations, they also have regular writers. Some of its Turkish writers are interesting. This team that complains about their own country to the West in an Islamophobic, Zionist media organ has not come together by coincidence ...”

Medyagundem then makes some accusations against the Turks who write for Al-Monitor and lists their names. My name leads the list, followed by Amberin Zaman, Kadri Gursel, Mustafa Akyol and others.

Although there is nothing to take seriously about an account that lists me — someone known as one of the most critical writers against Israel for decades — and Mustafa Akyol — a regular columnist of a Turkish daily known as a mouthpiece of the government, as the Turkish components of a Zionist lobby subcontractor — it is still worth pondering the likelihood of Erdogan's administration having lost its bearings and heading in a McCarthyist direction.

A week ago, I would not have even thought that there could be a link between writing for Al-Monitor and press freedom in Turkey.

by Murielle KASPRZAK and Joseph SCHMID | AFP | May 26, 2022
END_OF_DOCUMENT_TOKEN_TO_BE_REPLACED