Millions around the globe hope Turkey's main opposition's "Justice March" will mark the beginning of a new societal movement. 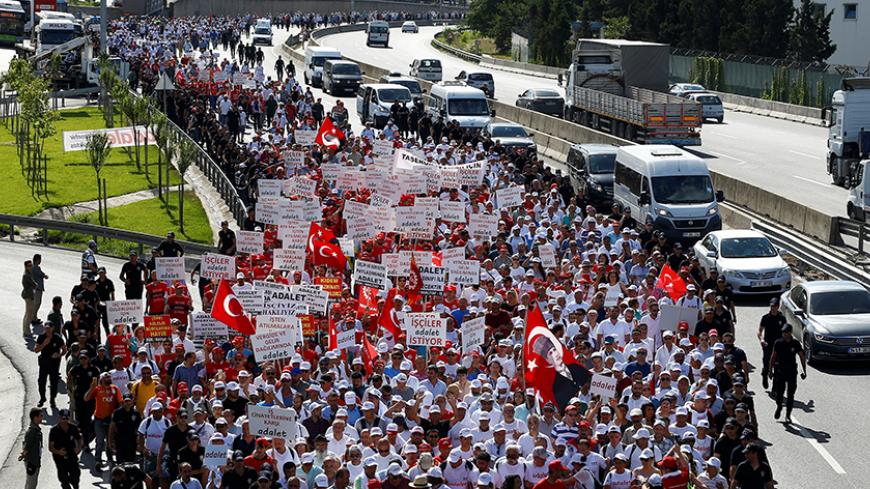 Kemal Kilicdaroglu, the chairman of Turkey's main opposition Republican People's Party (CHP), was perhaps the least likely figure to initiate a mass mobilization against the increasingly repressive regime of President Recep Tayyip Erdogan. Yet Kilicdaroglu, for a long time referred to as "Gandhi" for his physical resemblance to the Indian leader and ridiculed by his critics for his alleged passivity against Erdogan, took a Gandhi-like step and unleashed the great but hidden energy of opposition and dissent that has accumulated in Turkey in recent years.

Ironically, the CHP leader's activism was not a calculated or a carefully preplanned move. It came out unexpectedly when CHP deputy Enis Berberoglu, a veteran journalist who has been in charge of his party's media relations and communications since 2014, was sentenced to 25 years and put behind bars for allegedly revealing state secrets. The prosecution claimed Berberoglu leaked footage to Can Dundar, then-chief editor of Cumhuriyet newspaper, of Turkish weapon deliveries to Syrian armed groups. Parliamentary immunity was lifted in the spring of 2016 when the ruling Justice and Development Party (AKP) had forced a constitutional amendment, which the CHP supported. The objective of the amendment was to strip the immunities of pro-Kurdish Peoples' Democratic Party (HDP) deputies. Since November 2016, the HDP's co-chair and 12 deputies have been jailed. Kilicdaroglu has been severely criticized for his cooperation with the ruling party on that decision.

When Berberoglu was victimized by the Erdogan regime's repressive policies and became the first CHP lawmaker to be jailed, the verdict was difficult to justify. On June 14, when Berberoglu was imprisoned, Kilicdaroglu said he would be leading a "Justice March" from Ankara to Istanbul, where Berberoglu is incarcerated.

Kilicdaroglu, a 68-year-old former civil servant with no background in any civil unrest in his life, probably had no idea whether he would be able to complete the nearly 300-mile march or that he would be initiating a landmark move in Turkey's quest for democracy. Perhaps he did not predict his decision would mobilize tens of thousands of people from different backgrounds and political affiliations. The march turned into an eruption of resentment against the Erdogan regime and hopes of the Turkish people — secularists as well pious Muslims estranged by the AKP — for a decent future.

The sheer act of marching is impressive in itself. The first 10 days of the march coincided with the holy month of Ramadan, and many people walked while fasting — on empty stomachs and without a drop of water. They marched under the treacherous summer sun. There were no party banners, nor any political slogans. Kilicdaroglu has been leading the march wearing a white shirt that reads "Adalet" (Justice) and with a white hat bearing the same word. The marchers walking for "justice" have been enduring hardships and they are approaching Istanbul in the most memorable peaceful public display in the country's recent history. Their ranks began to swell, as journalists, celebrities from the literary world, movie stars, singers and veteran political figures from different parties all joined the marching ranks.

On July 8, the procession is expected to arrive at Pendik district on the Asian side of Istanbul. The march will end on July 9 in Maltepe with a rally in which 1.5 million people are expected to attend.

Nobody has any doubt that in the wake of the Justice March, Turkey will be a different place. The political landscape will be compelled to change. It may no longer be considered by outsiders as the personal property and political playground of Erdogan, a hopeless case drifting further into autocracy, bordering on a totalitarian state.

Of course, no one sober and realistic will opine that the march will change Erdogan's mindset, political strategy or tactics. The march, with its presumed success, is not expected to resurrect Turkey as a functioning democracy that respects human rights. Nobody thinks that justice is around the corner.

These are not the expectations. The new dynamic probably will not affect Turkey's ideologically bankrupt ruling bloc. However, the impact of the march will be on the opposition, infused by a new sense of self-confidence and vigor.

Before finishing this piece, I saw an article by Kilicdaroglu in The Guardian on July 6 titled “We are marching to halt Turkey’s slide into authoritarianism.” While the CHP leader noted that the marchers have endured physical challenges, more and more people are joining and "hope is contagious."

"We are walking to remind those who choose to rule by decree and intimidation that ours is a social contract: we, as citizens, submit to the authority of the state in exchange for the protection of our rights. We are walking to restore that contract; we are walking to restore democracy, justice and our hard-earned fundamental freedoms. We are walking to lift the deceptive veil of 'democracy' from what is in fact a harsh authoritarian regime. Our march will end at the gates of the prison in Istanbul that houses so many of this regime's victims. But we hope it will mark the beginning of a new societal movement for justice, one that will resonate beyond Turkey’s borders," he concluded.

Millions of people in Turkey and around the globe hope so, because Turkey's well-being matters to outsiders as much as to the Turkish people themselves.