Turkey’s main opposition leader is heading a march from Ankara to Istanbul in his most powerful protest so far against the government’s toughening crackdown on dissent. 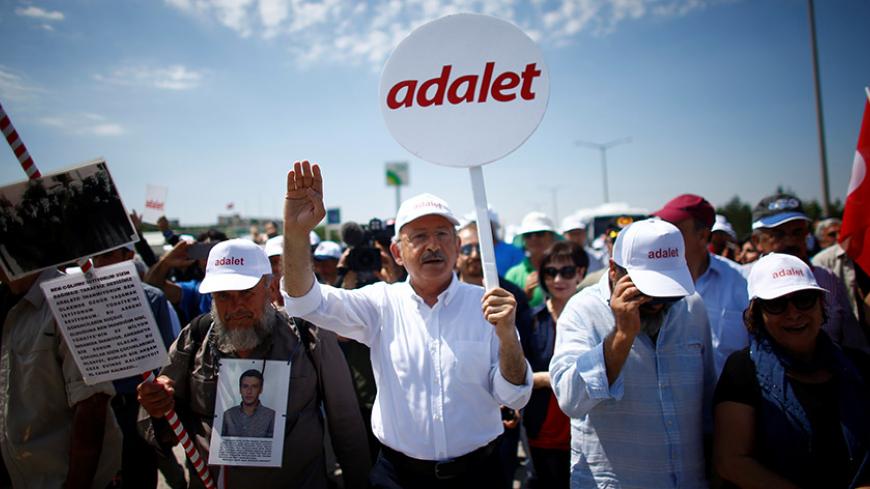 In May 2016, Turkey’s parliament passed a constitutional amendment revoking the judicial immunity of current lawmakers. The move was believed to target Kurdish deputies, and indeed many members of the Peoples’ Democratic Party (HDP), including both of its co-chairs, have since landed behind bars on terror-related charges. On June 14, however, an Istanbul court took the unprecedented step of jailing a prominent lawmaker from the main opposition Republican People’s Party (CHP) on controversial charges that he had leaked footage of weapons-laden trucks operated by Turkey’s intelligence agency that were allegedly destined for armed groups in Syria.

The ruling against Enis Berberoglu sparked fears that the CHP — Turkey’s oldest party and legacy of the country’s founding father Mustafa Kemal Ataturk — is next in line in Ankara’s crackdown on dissent, which has greatly intensified since the botched coup last year. Did CHP deputies expect that the abolition of immunities, which some party members had backed, would one day turn against them? Al-Monitor posed the question to several CHP lawmakers ahead of an emergency party meeting after Berberoglu’s conviction. All said they had never imagined such a prospect. The party seemed to be in shock.

The emergency meeting, however, produced another “shock.” CHP leader Kemal Kilicdaroglu — long under fire for being too soft and unable to galvanize the opposition — announced he was launching a protest march from Ankara to Istanbul and said anyone was welcome to join him. He named the protest the “Justice March.”

On June 15, thousands of people packed Ankara’s Kizilay Square, the starting point of the march. The protestors stood in silence, holding banners with a single word: "Justice." Kilicdaroglu, who arrived with his wife and son, dedicated the march to all people victimized by government policies, stressing it was “not only the CHP’s, but everybody’s march.” Brandishing his own “justice” banner, the 68-year-old then launched the 480-kilometer (300-mile), 23-day trek to Istanbul’s Maltepe Prison, where Berberoglu is incarcerated.

The crowd behind Kilicdaroglu included not only CHP lawmakers and party activists but also members of other parties, trade unions and civic society groups as well as thousands of ordinary citizens. Two figures stood out in the procession — Fatma Bostan Unsal, a now-estranged co-founder of the ruling Justice and Development Party (AKP), and former AKP deputy Faruk Unsal. “There are two places where the people can raise their voice — the press and the street,” Faruk Unsal told Al-Monitor. “With the press completely under government control, we have [only] the street left for us.”

Marching next to Unsal was Cihangir Islam, a medical professor and a prominent political activist in Turkey’s conservative quarters. “I’m here for all oppressed and victimized people, for all academics who have been dismissed from their jobs,” he said, referring to massive purges in universities, the victims of which included himself.

A notable feature of the march is that the majority of participants are over 50. Veysel Kilic, 65, was marching with an image of his son, who has been in prison since last year for involvement in the coup attempt but is still waiting an indictment. The young man was among scores of unwitting military academy cadets, commandeered to the Bosporus Bridge on the night of the putsch, unaware of what was going on. Zeynep Sari, also in her 60s, joined the march for her daughter, a physician who lost her job in the post-coup purges. “I carried dung cakes to give my daughter an education,” she grumbled, revealing a background in poverty. Kilic’s and Sari’s stories can perhaps explain the preponderance of middle-agers at the march. Scores of fathers and mothers seem to have hit the road for adult children who are either behind bars or left jobless.

The people Al-Monitor met at the Justice March were of various profiles — from purged academics and lawyers to pious women with headscarves and housewives who left children at home with husbands to join the protest. Members of parties and civic groups with no history of collaboration with the CHP were also there. This colorful diversity suggests that Kilicdaroglu’s message for “all who want justice” to embrace the march is bearing fruit.

The first 20-kilometer (12-mile) leg of the trek ended near a hippodrome in an Ankara suburb, where the marchers camped for the night. Some readied to break their fast, an extra challenge brought by the holy month of Ramadan; others sought remedy for swollen feet and blisters. Using his medical skills, Islam performed an impromptu checkup on Kilicdaroglu, and seemed delighted with the result.

On the second day, the marchers covered another 20 kilometers. The third day of the trek was dedicated to imprisoned journalists, and the fourth, which coincided with Fathers’ Day, to victimized fathers. The CHP leader received a present for the day — a new pair of walking shoes, delivered with a sarcastic message to the government. Recalling the cash-stuffed shoeboxes seized in the home of an AKP bureaucrat during massive corruption probes in late 2015, CHP deputy chair Aykut Erdogdu said, “We gave the shoes to our chairman, and the box we are going to send to the [presidential] palace.” The fifth day of the march was marked by the tragic news of the death of a 65-year-old marcher who suffered a heart attack.

CHP members say they are determined to continue the march even if Berberoglu is released in the meantime. The Kurdish movement has also lent support to the protest, while calling for the route to be extended beyond Istanbul to Edirne, where HDP leader Selahattin Demirtas is imprisoned. The route remains unchanged for now, but CHP members say they are walking for the jailed HDP lawmakers as well.

During the treks, drivers often hail the marchers with horns. Some even pull over to briefly join the march. On a few instances, Al-Monitor also witnessed drivers verbally abuse or protest the CHP leader. Yet the marchers remain calm and cautious against provocations.

The trek has continued free of incidents so far, but Prime Minister Binali Yildirim and his ally, nationalist opposition leader Devlet Bahceli of the Nationalist Action Party, have frowned at the protest, warning that street action is prone to provocations. President Recep Tayyip Erdogan, for his part, has claimed the march is against the law and told the marchers “to not be surprised if you, too, are summoned by the judiciary tomorrow.”

Many have interpreted Erdogan’s words as a threat that Kilicdaroglu, too, might by arrested. Yet the main opposition leader remains determined to continue the protest, which some have likened to Gandhi’s famous Salt March against British rule. “We could face attacks or criticism [but] I will march on for justice with stubbornness and resolve,” Kilicdaroglu said June 19, before embarking on the fifth leg of the march.