Kemal Kilicdaroglu’s impressive march from Ankara to Istanbul shows one thing: The CHP is no longer the “state party” that it was throughout the 20th century. 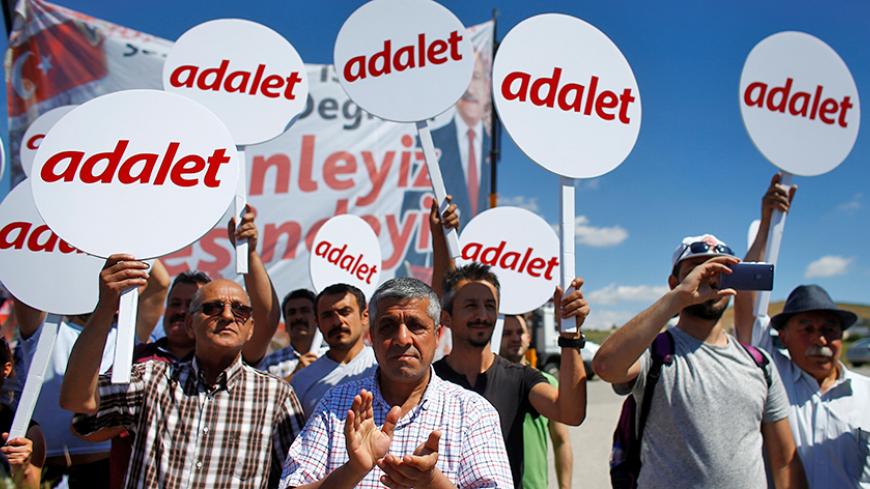 Supporters of the main opposition Republican People's Party hold placards that read "Justice" as they walk with the party's leader Kemal Kilicdaroglu (not pictured) during a protest march dubbed the "Justice March," Saray, near Ankara, Turkey, June 16, 2017. - REUTERS/Osman Orsal

As I was writing these lines, Kemal Kilicdaroglu, the leader of Turkey’s main opposition Republican People's Party (CHP), was marching on the highway somewhere near Hendek, a town 200 kilometers (124 miles) east of Istanbul. He had been on the road for two weeks, walking some 15-20 kilometers (9-12 miles) a day and resting at a hotel or in a bus at night. He had at least 10 more days to go. And neither him, nor the thousands of people who joined him for this remarkable march, held any party flag or partisan slogan. They marched only with one simple motto: Justice.

This is the “Justice March” Kilicdaroglu began June 15 in reaction to a court decision that sentenced one of the CHP’s deputies, Enis Berberoglu, to 25 years in prison. Berberoglu’s alleged crime was to help publish the photos of weapons that Turkish intelligence trucks were shipping into Syria back in 2014. This, in the eyes of the court, made him a criminal who “exposed state secrets” and carried out “espionage.” In the free world, however, people would probably just say he did something called “journalism.”

The Berberoglu sentence was in fact only the last straw. Since the July 15 failed coup, Turkey has been going through one of its darkest eras in which “justice” has become desperately lacking. The coup attempt, for sure, was a bloody episode that required a rigorous prosecution and a state of emergency. But after a few weeks of “national unity,” the government began to use the state of emergency as a tool to crack down on all opposition voices in every walk of life, from politics to journalism to academia. More than 50,000 people found themselves in jail, and another 140,000 people have been fired from their jobs. These arrests and purges were often based on nothing but suspicion, and someone’s political stance against the government was often seen as enough evidence of “treason.” Prosecutors and judges themselves faced the pressure of arresting more and more people to prove their loyalty to the system.

Moreover, those who saved themselves from the wrath of the purge included “those who know somebody,” as conservative columnist Ahmet Tasgetiren noted in an article. In other words, what protected people turned out not to be the rule of law, but connection to power. This added more to the yearning for justice.

It was therefore wise for Kilicdaroglu, who has been long criticized for “ineffective opposition,” to see this burning need in society and take a bold step to spearhead it. It is really remarkable that the 68-year-old politician is marching, under the blazing sun, all the way from Ankara to Istanbul — a distance of 480 kilometers (300 miles). It is also remarkable that he got support from people from different ideological backgrounds, including Kurds, leftists and religious conservatives who are disillusioned by the ruling Justice and Development Party (AKP).

In the media, the Justice March received sympathy from some religious conservatives who traditionally have been at odds with the CHP due to the latter’s obsession with “laiklik” — the intolerant version of secularism that focuses on banning religious symbols such as the Islamic headscarf. Writer Elif Cakir, who wears the headscarf, wrote in her column in the daily Karar that the new CHP “must be appreciated.” A party that “for 80 years has spoken about nothing but secularism,” Cakir noted, is now “calling for justice for everybody, and that is really precious.”

Another headscarf-wearing writer, Nihal Bengisu Karaca, also expressed sympathy for the Justice March, while criticizing the crude reactions it received from the government and its supporters. One of those reactions was from a man who unloaded a whole truck of manure in front of a hotel where the justice marchers stayed. In her piece titled “Responding to demand for justice,” she wrote: “The CHP leader who has been blamed a million times to be ‘detached from the people’ sat at the fast-breaking dinners and congratulated the religious feasts of the people. He responded to nationalist salutes the same way. He sent his good wishes to President [Recep Tayyip] Erdogan, who got sick on the first day of the feast. … To those who threw bad words at him, he only responded with applause.”

And in the face of such civility and goodwill, Kilicdaroglu faced partisans who “welcomed” him with manure and a state minister who condemned him and all those who marched with him as “terrorists.” This contrast worked for Kilicdaroglu, as noted by some more reasonable supporters of the government. One of them, Tasgetiren, wrote that the Justice March is an important political phenomenon that “will resonate beyond the classical base of the CHP.”

Indeed, the Justice March is an important political phenomenon. It probably will not have any immediate impact on the ongoing reign of injustice, but it signals two major shifts in the political landscape.

First, the CHP is moving away from being a party obsessed with a rigid definition of secularism. This was a stance that kept the CHP as “the party of the 25%,” for the remaining 75% of voters shared a respect for traditional religion. Now, though, the CHP appears as a party that champions not secularism but justice, a value that has much broader public appeal.

Second, the CHP is no longer the “state party” that it was throughout the 20th century. That had made the CHP the defender of state authority, whereas anti-establishment slogans such as “justice” were championed by right-wing parties. (In 1961, the Justice Party was founded as a reaction to the 1960 military coup that the CHP unabashedly defended. In 2001, the AKP was founded as a reaction to the “soft coup” that basically advanced the CHP ideology.)

Today, the tables in Turkish politics have turned. The “state party” is certainly the AKP, which now bears all the hallmarks of arrogant and ruthless authoritarianism. And the main anti-establishment party is the CHP, which now defends the oppressed against the state and champions justice for all.