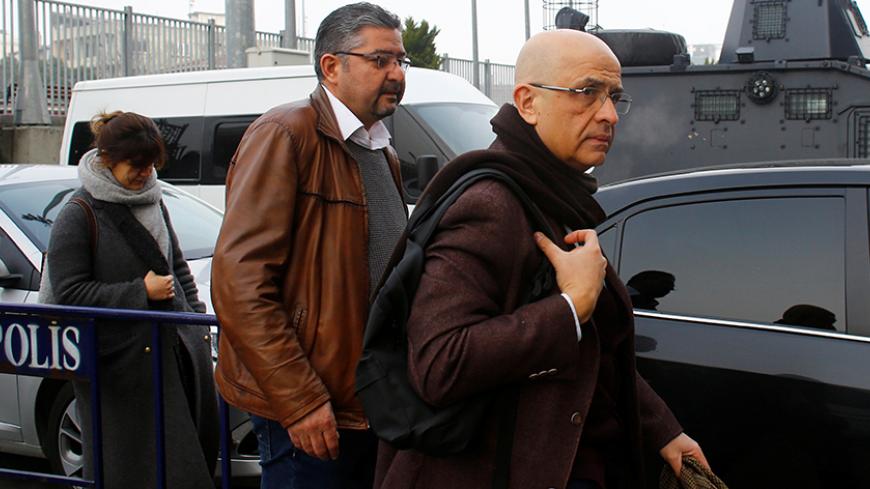 Enis Berberoglu, a lawmaker from the main opposition Republican People's Party, arrives at the Justice Palace, the Caglayan courthouse, to attend a trial in Istanbul, March 1, 2017. - REUTERS/Murad Sezer

A prominent opposition member of parliament was sentenced to 25 years in prison by a Turkish court today, part of a widening crackdown by Turkey’s Justice and Development Party (AKP) government against its critics.

Enis Berberoglu, a member of the pro-secular Republican People’s Party (CHP), was convicted of revealing state secrets. The veteran journalist who ran Hurriyet, the country’s most influential newspaper, before running for parliament was accused of having leaked footage shot in January 2014 of trucks operated by Turkey’s national spy agency, MIT, that were laden with weapons.

Turkey's judges are taking orders directly from the presidential palace, said CHP leader Kemal Kilicdaroglu after an emergency meeting of his executive board.

The arms were allegedly destined for jihadi groups in Syria. It is an open secret that since the start of the Syrian conflict in 2011, Turkey was for many years the main conduit for weapons flowing to opposition rebels, including jihadis, seeking to overthrow President Bashar al-Assad.

In March 2013, The New York Times reported that with the help of the CIA, Arab governments and Turkey had "sharply increased their military aid to Syria's opposition fighters." Quoting US and other officials, the report noted, "The Turkish government has had oversight over much of the program, down to affixing transponders to trucks ferrying the military goods through Turkey so it might monitor shipments as they move by land into Syria." The bulk of such deliveries originated from Esenboga airport in Ankara. The southern Mediterranean port of Mersin was the main hub for arms shipments to the rebels from Libya.

The truck scandal erupted when prosecutors in the southern province of Adana sought to stop and search the vehicles, only to be obstructed by a separate set of Turkish officials who arrived at the scene. Cumhuriyet suggested that the arms were destined for the Islamic State, though the paper was unable to substantiate the allegation.

Commenting on the verdict before being hauled off by security guards, Berberoglu said, “This decision is intended as a message of warning to the Turkish public.” CHP parliamentary whip Engin Altay took a harsher tone. “The case that was adjudicated today is one that provides the basis for [Turkish President] Recep Tayyip Erdogan to face prosecution as a war criminal in an international court,” he said.

Berberoglu, the first CHP deputy to be imprisoned under 15 years of AKP rule, will join a dozen or so imprisoned lawmakers (their numbers keep changing at a dizzying pace) from the largest pro-Kurdish bloc, the People’s Democratic Party (HDP). The Kurdish inmates include HDP Co-chair Selahattin Demirtas, who faces an array of thinly supported terror charges.

The story, which first ran in opposition newspaper Aydinlik before Cumhuriyet picked it up, provoked a furor.

Erdogan, who was prime minister at the time, insisted that the trucks were carrying aid to ethnic Turkmens in Syria. He accused Cumhuriyet of engaging in espionage and blamed allies of Fethullah Gulen, the Pennsylvania-based Sunni cleric who is also accused of masterminding last year’s failed putsch, of staging the affair. Cumhuriyet Editor-in-Chief Can Dundar would “pay a heavy price” for his actions, Erdogan warned.

A cover-up ensued. Prosecutors involved in the case were dismissed and charges brought against Dundar and fellow editor Erdem Gul. The pair, who did prison time, were convicted in May 2016 of publishing state secrets. Prosecutors are seeking an additional 10 years in prison for the two editors.

Dundar, who faces separate charges of terrorist propaganda, is now living in exile in Germany. Berberoglu was also prosecuted for providing video footage of the attempted truck search to Cumhuriyet.

In May 2016, the parliament approved a bill spearheaded by the AKP to strip the immunity of lawmakers facing trial. Some 20 CHP members are believed to have supported the measures, which helped pave the way for Berberoglu’s prosecution. The CHP is facing mounting criticism for its ineffectual opposition to Erdogan. Some go as far as to accuse the party founded by founder of the republic Kemal Ataturk of propping him up by continuing to sit in the parliament.