The Turkish president is furious with the editor of Cumhuriyet for publishing photos of the contents of the infamous MIT trucks stopped en route to Syria, but even more outraged that his policy of intimidation is failing to silence media criticism. 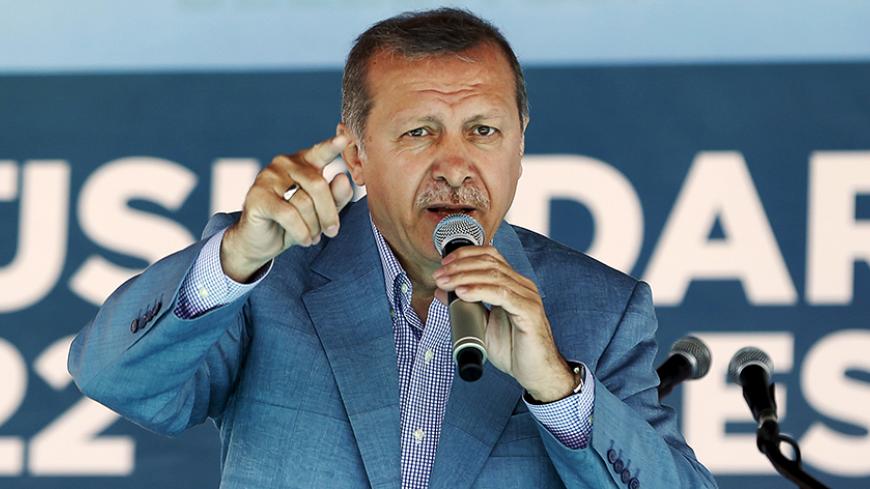 On the evening of May 31, Turkish President Recep Tayyip Erdogan publicly threatened journalist Can Dundar, the editor-in-chief of daily Cumhuriyet, a secularist paper that is no fan of his. Erdogan was interviewed on TRT, Turkey’s state TV, by three supportive journalists. “He will pay a heavy price for this,” Erdogan said, referring to Dundar. “I will not let go of him.”

Three days before, Cumhuriyet had published photographs of the cargo of the controversial “MIT trucks,” including machine gun ammunition and shells for mortars and other cannons. MIT is the acronym of Turkey’s National Intelligence Agency, and the trucks in question were chartered by MIT and stopped by Turkish police and gendarmerie on their way to the Syrian border in December 2014. It was the height of the intra-state war between the Justice and Development Party (AKP) government and the Fethullah Gulen movement, and many had assumed that pro-Gulen prosecutors were trying to expose yet another misdeed by the government in addition to corruption and other charges.

The AKP government denied that the trucks carried ammunition, insisting that they were loaded with humanitarian aid for the Turkmens in Syria, a destination that would find sympathy in many Turks. But now with Cumhuriyet’s exposure, just 10 days before the June 7 elections, the issue has been reignited. Both Erdogan and the government accuse anyone they see complicit in the exposure — from the Gulen movement to Cumhuriyet — of treason. In return, the opposition blames the government for supporting terrorists in Syria — especially the Islamic State (IS).

If one takes a step back from Turkey’s heated politics, however, both of these charges look overblown. As for MIT, it is no secret that Ankara is an avowed supporter of the Syrian opposition, and many believe that this support include arms for select groups. But there is no evidence to believe these groups include IS. It seems thus more plausible that the MIT trucks were destined for more moderate groups, such as the Free Syrian Army, or Islamist factions such as Ahrar al-Sham, which have been still a matter of concern for the West but do not share IS’ brutal tactics and even oppose them.

RUSI Associate Fellow Aaron Stein, an expert on Turkish foreign policy, also dismisses the narrative that MIT trucks supplied IS as “propaganda” by the Turkish opposition. “The trucks appear to have been en route to Idlib, which would suggest Ahrar al-Sham,” he said in a statement to Al-Monitor. “The concern is that Ahrar [al-Sham] and [Jabhat] al-Nusra cooperate, most recently through the Turkish-backed Jaish al-Fateh [Army of Conquest] umbrella group.”

In any case, the Turkish public deserves to be informed about what cargo the MIT trucks were carrying to Syria and to whom — funded by taxpayer money. That is why Prime Minister Ahmet Davutoglu’s latest statement on this issue, that it is “no one's business,” is not acceptable. In fact, the more the government responds with an attitude of concealment, the more it fuels suspicion.

What is even more unacceptable, of course, is the targeting of Cumhuriyet for publishing the photos. Government propagandists are trying to justify the wrath of the government by referring to the case of WikiLeaks founder Julian Assange. Assange, in this argument, “exposed state secrets” and thus was targeted by the US government; so the same must be done to Dundar. Yet, the charges against Assange were not publishing “state secrets,” but leaking classified documents. The secrets exposed through WikiLeaks were published freely in The New York Times and other US newspapers, and President Barack Obama did not vow to punish them for treason.

Which brings us to the burning problem in Turkey: aggressive intimidation by the government of any media outlet that stands in its way. Behind this lies first arrogance, which comes out as intolerance to criticism. Then there is also an extremely conspiratorial worldview, which assumes that all opponents and critics of the government must be united under a nefarious global conspiracy to topple the regime and bring back the hated “Old Turkey.”

That is why, for example, Erdogan recently condemned The New York Times after a well-substantiated editorial headlined “Dark Clouds Over Turkey.” Calling the newspaper a “rag,” Erdogan argued that the publication expressed “hate” for Turkey since the time of Sultan Abdulhamid II in the late 19th century. However, he did not explain why one of his own propaganda outlets, Sabah, run by his son-in-law, used to distribute the Turkish version of The New York Times as a supplement until a few years ago — as advertised in this slick Frank Sinatra-style video.

The obvious truth is that the rapidly declining image of Erdogan in the Western media in the past two years is not the product of a global conspiracy. It is rather the product of Erdogan’s own words and deeds. And neither this image nor Turkish democracy will benefit from anger against international media organizations and threats against Turkish journalists.