Are hit squads about to take aim at Turkey's dissidents abroad?

A Turkish parliamentarian has told Al-Monitor that Western officials believe dissidents and religious minority leaders in exile are being targeted by Turkish government operatives for assassination. 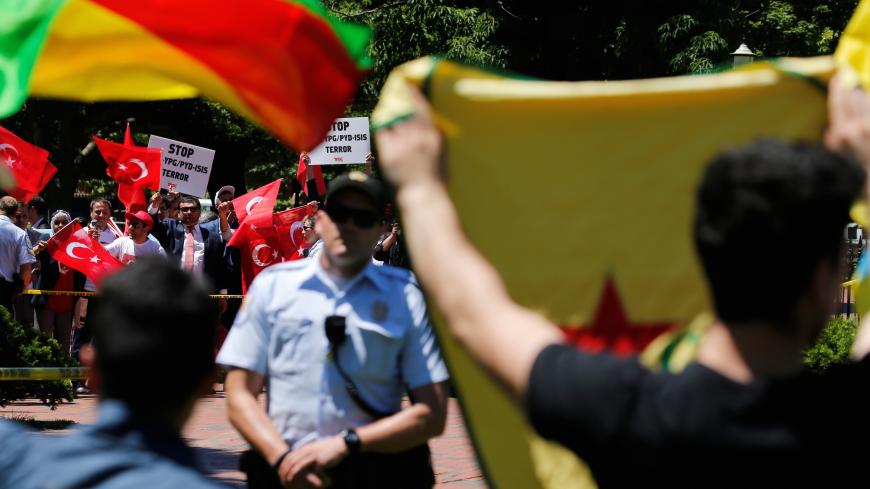 A group of pro-Erdogan demonstrators shout slogans at a group of anti-Erdogan Kurds (foreground, back to camera) in Lafayette Park as Turkey's President Recep Tayyip Erdogan met with US President Donald Trump nearby at the White House in Washington, May 16, 2017. - REUTERS/Jonathan Ernst

Shadowy Turkish operatives are plotting the murders of high-profile Turkish dissidents and religious minority leaders living in exile in a bid to sow further chaos and instability, a prominent Turkish lawmaker warned today.

Garo Paylan, a member of parliament for the pro-Kurdish Peoples’ Democratic Party (HDP), said he had received confirmation from Western officials about Turkish individuals with alleged connections to the Turkish state who are planning to carry out sensational assassinations of several prominent journalists and other government critics. “There is a list of targets,” he told Al-Monitor in a telephone interview.

Paylan emphasized that there is no evidence that the operatives are acting under direct orders from the government. “Rather, in gray and turbulent times such as those we are experiencing today, rogue networks inside the state take matters into their own hands, as we saw with the murder of Hrant Dink,” he said, referring to the Armenian Turkish newspaper editor gunned down outside his Istanbul office on Jan. 19, 2007, by a young man thought to have been put up to the job by ultranationalist security officials.

Turkish President Recep Tayyip Erdogan has repeatedly lashed out at Western governments that have offered refuge to a growing population of political exiles fleeing possible imprisonment in Turkey for alleged ties to Fethullah Gulen, the Sunni cleric and No. 1 suspect in last year’s failed coup. Others are accused of connections to the outlawed Kurdistan Workers Party (PKK).

Having offered sanctuary to many of the exiles, Germany is the leading target of the Turkish government’s ire, resulting in a meltdown in relations between the NATO allies and tit-for-tat arrests of German nationals in Turkey on dubious terrorism charges.

Paylan said the government’s incendiary rhetoric, singling out some of its critics by name, has created a climate of impunity. “[This] can be interpreted by overzealous vigilantes as a green light to go after them,” he asserted. The lawmaker added that he had alerted several senior Turkish government officials about the alleged scheme to carry out extrajudicial killings. Paylan declined to identify them by name, but offered, “They thanked me.”

Celal Baslangic, a veteran Turkish journalist, has written extensively on Kurdish matters. He is living in exile in the German city of Koln, where he runs the independent online news portal Arti Gercek and its television arm. Baslangic, charged with belonging to a terrorist organization along with several other journalists — for editing the now shuttered pro-Kurdish newspaper Ozgur Gundem in an act of solidarity — shares Paylan’s worries.

“The Turkish state targeting its opponents is nothing new. But we have been informed that three new assassins have been dispatched from Turkey to Germany and may be in our midst.”

“The Turkish state targeting its opponents is nothing new,” Baslangic told Al-Monitor. “But we have been informed that three new assassins have been dispatched from Turkey to Germany and may be in our midst.”

Baslangic declined to reveal his sources. “I have told my colleagues to be on guard,” he said.

Can Dundar, the exiled former editor-in-chief of the opposition daily Cumhuriyet, is a likely target. Dundar was sentenced to five years and 10 months in prison in May 2016 on charges of revealing state secrets in Cumhuriyet’s coverage of alleged arms shipments from the Turkish government to Syrian jihadis. The day of Dundar's sentencing, a gunman shot at him outside the courthouse. Dundar fled to Germany two months later. Today, Turkish prosecutors demanded an additional 15 years for Dundar over his alleged ties to Gulen, again in connection to the illicit arms shipment claims.

In a telephone interview with Al-Monitor, Dundar denied all the charges against him and declined to comment on whether he was the target of any assassination attempt. He did say, however, “It's perfectly conceivable that somebody would want to kill a journalist, academic or intellectual labeled as ‘traitor’ by the Turkish president, so as to prove their patriotism and loyalty.” He added, “It's inconceivable that many of these so-called mystery murders were conducted without the state sanctioning them.”

The extrajudicial targeting of Turkish government opponents has a long history. Throughout the 1980s, the notorious Turkish hit man Abdullah Catli masterminded a string of assassinations and bomb attacks against Armenians in Europe. He purportedly acted under orders from the Turkish state to avenge the murders of Turkish diplomats by Armenians seeking in turn to avenge the 1915 genocide against Ottoman Armenians. In the 1990s, Catli pointed his gun at Kurdish journalists thought to be sympathetic to the PKK.

In January 2013, three Kurdish female activists, including Sakine Cansiz, a PKK co-founder, were found dead with gunshot wounds in a Paris apartment. The prime suspect, Omer Guney — who was arrested but died in a French hospital just days before his trial was due to start in January 2017 — was widely alleged to have been connected to MIT, Turkey’s intelligence agency.

In September, the respected German weekly Der Spiegel published an interview with a Kurdish activist who said that he never spends more than three days in the same city for fear of being killed. Yuksel Koc, co-chair of the European Kurdish Democratic Societies Congress, claimed his name was on a hit list “assembled by Turkish President Recep Tayyip Erdogan” and that he was told so “by an agent of the Turkish secret service.” Der Spiegel reported that a certain Fatih S., facing trial in Hamburg over his alleged mission to “track down” Koc, “has testified in his interrogations about MIT plans to murder [Koc] and another Kurdish man.”

The German Federal Prosecutor’s Office in Karlsruhe, however, announced earlier this month that it had closed the case. One of the reasons cited for the dismissal was that the “defendants believed they had to fear significant repression by government agencies in Turkey if they had refused to implement the mission of Diyanet.”

Last week, Germany’s state-run radio service reported on alleged ties between Metin Kulunk, a member of parliament for Erdogan’s Justice and Development Party, and a controversial Turkish outfit known as the German Ottomans. It is believed to be run out of a boxing club, Osmanen Germania Boxclub, in the town of Dietzenbach.

Last year, federal police carried out multiple raids on the group across Germany for alleged involvement in drugs and arms trafficking and money laundering as well as blackmail. Deutsche Welle referred to claims based on information gathered from official wiretaps that allegedly suggested that Kulunk had provided funding to leaders of the gang. Kulunk has denied all the accusations, calling them a “plot by the Fethullah Gulen Terrorist Organization.”

German officials did not respond to Al-Monitor's request for comment.

Meanwhile, Switzerland and Austria, also home to significant Turkish communities, have launched probes into whether Turkey is conducting espionage on their soil.