As the Turkish authorities prepare to search the Saudi consulate where a dissident Saudi journalist disappeared last week, the Turkish opposition is curiously silent about the matter despite the ruling party's harsh treatment of the country's own press. 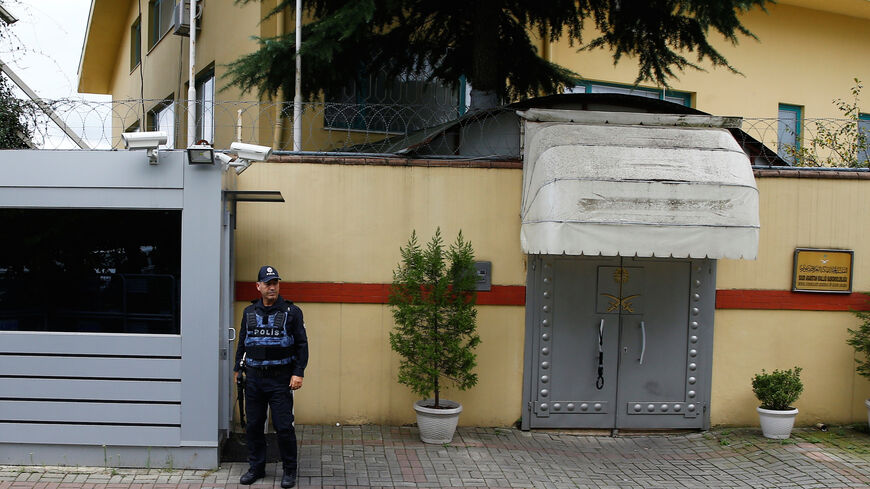 The mystery cloaking the disappearance of dissident Saudi journalist Jamal Khashoggi in Turkey continues to grip the world, with world leaders now calling for an immediate explanation of his whereabouts amid growing fears that he may have been murdered.

Federica Mogherini, the European Union’s foreign policy chief, told reporters in Lisbon that the EU wants “a full-out investigation and full transparency from Saudi authorities on what happened.” The United Nations has weighed in with similar appeals and has called for an independent international investigation of the affair.

President Donald Trump broke his silence yesterday, some five days after the 59-year-old entered the Saudi Arabian consulate building in Istanbul to secure documents needed to marry his Turkish fiancée, Hatice Cengiz, a rare Turkish expert on Oman, never to be heard from again. Trump said, “I don’t like hearing about it … but there’s some pretty bad stories going around. I do not like it," Trump said. He was referring to allegations that Khashoggi was murdered on the consulate premises by a team of Saudi hit men who arrived in two separate planes that were recorded as landing in Istanbul’s Ataturk airport the day he vanished. Turkish officials have hinted that Khashoggi may have been dismembered and then spirited out of the building in a black van.

The Turkish authorities are due to launch an extensive forensic search of the building, which a well-informed source told Al-Monitor on condition of strict anonymity “will be treated like a crime scene” with “sniffer dogs, the whole lot.” Saudi Arabia has described the claims leaked by Turkish officials that Khashoggi was killed inside the consulate as “baseless.”

The plight of Khashoggi, a permanent resident of the United States and a well-known figure in Washington policy circles for his growing criticism of Saudi Arabia’s powerful Crown Prince Mohammed Bin Salman, ought to elicit stronger words from the administration. But then, one could say the same of Turkey’s opposition parties, who until today hardly uttered a peep. None of the leaders of the opposition parties represented in the parliament made a single reference to Khashoggi on Twitter.

Kemal Kilicdaroglu, the leader of the main opposition Republican People’s Party (CHP), finally brought up the case in an address to his own lawmakers in the parliament today, accusing the ruling Justice and Development Party (AKP) of laxity. Kilicdaroglu said it was disgraceful that a foreign journalist should be targeted on Turkish soil and that all Saudi diplomatic staff in Turkey should be expelled. “Even Trump is talking about this,” he said — never mind that the US president had done so before Kilicdaroglu had even pronounced Khashoggi’s name.

Nor did the co-chairs of the largest pro-Kurdish bloc, the People's Democratic Party (HDP), the pro-Islamic Saadet or “Felicity” party or the conservative İyi or “Good” party.

Khashoggi’s disappearance ought to present the opposition with a golden opportunity to attack the Turkish government over its own harsh treatment of journalists — over 100 of them are rotting in jail for political reasons. (Today, journalist Abdurrahman Gok was detained on charges of links to the outlawed Kurdistan Workers Party together with seven other media workers.)

The opposition’s indifference to Khashoggi is yet another sign of “just how parochial, weak and divided they are” said Levent Gultekin, a prominent AKP critic and columnist for the independent online news publication Diken. “They are bogged down in their own internal squabbles.”

The Twitter account of far-right nationalist leader Devlet Bahceli is wallpapered with assorted pot shots at Iyi head Meral Aksener, the CHP and the HDP. Then again, as Gultekin observed, many Turks may well be oblivious to Khashoggi’s fate as well. “With tens of thousands of people in jail and poverty and unemployment on the rise, Khashoggi’s ordeal is pretty low in the list of grievances,” he told Al-Monitor.

For better or worse, Erdogan is turning up the volume of protest against the Saudi authorities, saying, “They cannot extract themselves by just saying he left [the building].” But as David Kaye, the UN’s special rapporteur on freedom of expression, noted today, Khashoggi’s disappearance “puts basically the Turks in a position of having to maintain a diplomatic relationship and to deal with a real important, high-profile investigation.”