US Secretary of State Mike Pompeo is headed for Ankara, where he will likely brief Turkish President Recep Tayyip Erdogan on his talks with Saudi leaders on the disappearance of journalist Jamal Khashoggi. 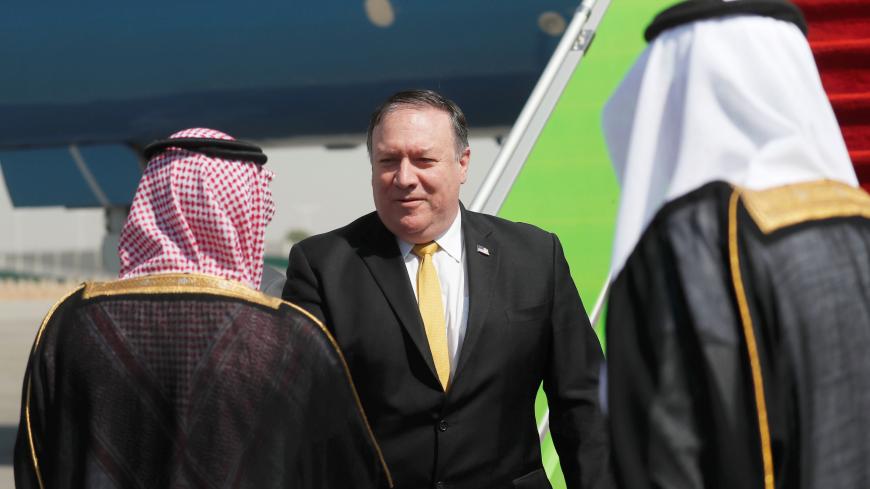 US Secretary of State Mike Pompeo is expected to head to Turkey Wednesday following meetings with Saudi King Salman and his son, Crown Prince Muhammed bin Salman Al Saud, in Riyadh, the Turkish Foreign Ministry confirmed in a statement today. The ministry said he would be meeting with Turkish Foreign Minister Mevlut Cavusoglu to discuss regional and international matters but did not elaborate. The full details of his program have not yet been disclosed and US Embassy staff in Ankara declined to comment on the visit.

Pompeo’s trip to Ankara comes amid fresh details of the alleged murder of dissident Saudi journalist Jamal Khashoggi, who went missing after entering the Saudi Consulate in Istanbul Oct 2.

Pompeo will likely brief Turkish President Recep Tayyip Erdogan on his talks with Saudi leaders, part of an effort to resolve the crisis, which has drawn global ire.

Erdogan said Turkish officials who scoured the consulate premises for nine hours on Monday were looking into “toxic” and freshly painted material ostensibly altered to conceal traces of the alleged slaying of the Washington Post columnist, who was a vocal critic of the famously thin-skinned Saudi heir to the throne. “My hope is that we can reach conclusions that will give us a reasonable opinion as soon as possible because the investigation is looking into many things such as toxic materials and those materials being removed by painting over them,” Erdogan told reporters.

Turkish investigators were expected to conduct a separate search of the Saudi consul general’s residence today. The consul, Mohammed al-Otaibi, flew out of the country this afternoon, Turkey’s state-run Anadolu news agency reported. Saudi authorities did not comment on their man’s departure, which followed demands from United Nations Human Rights Commissioner Michelle Bachelet for the kingdom to lift the diplomatic immunity conferred by the Vienna Convention from its Istanbul mission. “Under international law both a forced disappearance and an extra-judicial killing are very serious crimes and immunity should not be used to impede investigations into what happened and who is responsible,” Bachelet said in a statement.

Until this week, Saudi Arabia had shrilly denied that Khashoggi had been killed and insisted that he walked out alive. But the Saudis have failed to produce any camera footage of him leaving the consulate, where he was securing documents that would enable him to marry his Turkish fiancée, Oman expert Hatice Cengiz.

CNN reported Monday that that the Saudis were preparing a report that would acknowledge Khashoggi’s death and claim it was the result of a botched interrogation. There is no word on where his remains are and whether they were, as alleged by unnamed Turkish officials, spirited out of the consulate after his corpse was dismembered by a 15-member Saudi hit squad that was said to have been dispatched to Istanbul.

It remains unclear whether this stab at damage control, including suggestions that “rogue killers” were involved, will suffice to staunch the torrent of condemnations and demands for accountability pouring in from all corners of the globe. It hasn’t helped that Turkey named Salah Muhammed al-Tubaiqi, the head of the forensic medicine department at the Saudi Interior Ministry that is headed by Prince Abdul-Aziz bin Saud bin Naif, as one of the 15 Saudis implicated in Khashoggi’s likely murder.

The looming question is what price if any the controversial crown prince will pay. Pompeo was all smiles in his meeting with him, prompting a flurry of angry reactions on Twitter. "Disgusting," tweeted prominent CNN contributor Ana Navarro. Prince Salman has already made many enemies within his own ruling family with his ruthless power grab, which saw the arrests of at least 11 princes along with numerous ministers in November 2017.

Republican Senator Lindsey Graham of South Carolina ripped into the prince in an interview with “Fox and Friends” today, calling him “a wrecking ball” who had “this guy murdered in a consulate in Turkey.”

Graham urged President Donald Trump, a sometime golf partner, to “sanction the hell out of Saudi Arabia” and insisted the prince has “gotta go.”

Turkey would certainly shed no tears for the crown prince, better known by his initials MBS. The Saudi prince reportedly described the Turkish government as “a triangle of evil” comprising Iran and various Islamist groups. He also accused Ankara of trying to reinstate the Islamic Caliphate abolished by the founder of modern Turkey when the Ottoman Empire collapsed nearly a century ago, according to Egypt’s Al-Shorouk newspaper.

Saudi Arabia’s recent overtures to Syrian Kurdish militants in northeastern Syria have further poisoned ties between Turkey and its former Ottoman subjects. Turkey has yet to make public the evidence it claims to possess that proves the Saudis murdered Khashoggi. It may choose to leverage it to press for concessions from the Saudis. Pompeo’s visit may help crystallize the Turkish position.