The joint Turkish-Saudi investigation into the disappearance of dissident Saudi journalist Jamal Khashoggi seems to have started, though details are elusive and doubts about its seriousness persist. 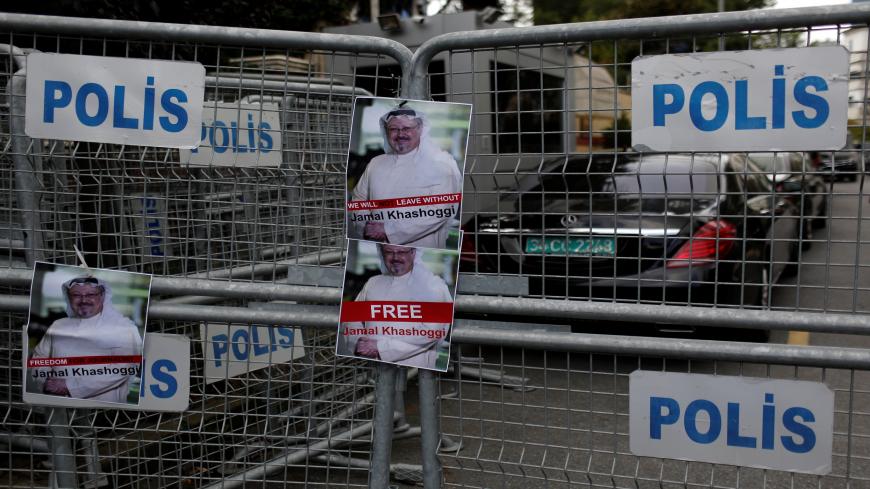 Pictures of Saudi journalist Khashoggi are placed on security barriers during a protest outside the Saudi consulate in Istanbul, Turkey, Oct. 8, 2018. - REUTERS/Murad Sezer

Since last week, Turkish officials have been insisting that a full forensic sweep of the building would be conducted. The Turkish officials seen entering the building were not wearing any protective gear, however, casting doubt over the exact nature of the visit. The pro-government Daily Sabah reported, “About a dozen Saudi members of the Turkish-Saudi team investigating the disappearance Washington Post journalist Jamal Khasoggi were seen entering the Saudi consulate in Istanbul on Monday afternoon.”

Saudi Arabia’s King Salman ordered a formal internal investigation into the case today amid mounting diplomatic pressure for a credible explanation as to why Khashoggi never re-emerged from the consulate, where he was arranging paperwork enabling him to marry his Turkish fiancée. France, Germany and the United Kingdom have called on Saudi Arabia to produce information about the incident, which has prompted global corporations and media outlets to pull out of a Saudi “Future Investment Initiative Conference” due to be held in Riyadh Oct. 23-25. The event is meant to showcase Crown Prince Muhammed bin Salman Al Saud’s proposed reforms for the kingdom. The powerful prince was the target of Khashoggi’s escalating critiques of his homeland.

US Secretary of State of Mike Pompeo is flying to the kingdom, where he will meet Salman to discuss the case on the president's behalf and may continue on to Turkey if warranted. Donald Trump has seesawed between threats of “severe punishment” and reluctance to forsake billions of dollars in arms sales to the kingdom over Khashoggi, whom the president noted was not a US citizen. Briefing White House reporters on his telephone conversation with the Saudi monarch, Trump said Salman had issued a "flat denial" of the assassination claims and suggested the perpetrators may have been extrajudicial forces. Turkey’s President Recep Tayyip Erdogan has refrained from pointing fingers at the Saudi leadership so far, while vowing to pursue the affair. On Sunday he spoke with the Saudi monarch over the telephone, prompting speculation that Turkey might be looking for a face-saving path out of the morass. According to Turkey’s pro-government A Haber news channel, the two leaders lauded their decision to conduct a joint investigation but no further details emerged.

Turkey’s relations with its former Ottoman dominion mirror to some extent those with its other regional rival Iran. Ankara and Riyadh are on opposite sides of the kingdom’s hostility to Qatar and the Muslim Brotherhood, but are leery of allowing their differences to impinge on joint economic interests.

However, Max Hoffman, associate director for national security and international policy at the Center for American Progress in Washington, DC, noted “how forward-leaning Turkey has been on this issue rather than trying to sweep it under the rug to preserve Saudi ties.” Hoffman told Al-Monitor, “Flash back to 2015 and the many observers who thought Turkey was being pulled by Saudi Arabia into a Sunni regional bloc — largely against its wishes — ready to confront Iran. Ankara shared the Saudi interest in overthrowing [President Bashar al-] Assad in Syria and limiting Saudi influence there, but it has otherwise always sought to compartmentalize relations with Tehran to preserve cooperation on energy, trade and cooperation against [the Kurdistan Workers Party].”

A slew of gruesome allegations leaked by Turkish officials suggest he was murdered on site after being tortured by a team of 15 Saudi hit men dispatched from the kingdom the same day. The claims are said to based on audio and visual evidence Turkish officials say they have.

Saudi Arabia denies all the claims, but has not offered proof of life for the missing journalist. Turkey has yet to formally confirm any of the information that Turkish officials have been leaking to the Western media, allegedly on Erdogan’s orders and via his spokesman Ibrahim Kalin. Hoffman noted that Turkey “may not want to release the more sensitive stuff — anything they have from inside the consulate — for operational reasons.”

Gonul Tol, the executive director of the Middle East Institute’s Turkey program, believes Erdogan is in a bind. His strategy, she told Al-Monitor, “is trying to increase pressure on the Saudi leadership by releasing information in a controlled manner before he makes a decision as to what to do next.” At the same time, he cannot afford to be perceived as capitulating to the Saudis on an issue that goes to the heart of Turkish sovereignty, of which Erdogan purports to be the biggest champion. One face-saving formula would be to pin the affair on “rogue Saudi security forces,” and Erdogan’s spin doctors could glibly manufacture fresh arguments to fit this version of events.

The need to maintain a façade of muscular independence has been heightened by Friday’s court decision to free US pastor Andrew Brunson. Turkey insists that his release after being held for two years on outlandish espionage and terror charges has nothing to do with Trump’s threats of further US sanctions, and pro-government screeds sought to dispel any such notion in their columns today. Ahmet Kekec of the Star suggested the problem lay not with the government but the judiciary, which had allowed “rotten” witnesses to testify in the case.