Turkey eyes Washington for its next Khashoggi move

Even as reports emerge about the death of a suspected member of the Saudi team that allegedly killed Saudi journalist Jamal Khashoggi, the steady stream of gory details is losing its shock value while the world waits for Turkey to produce its evidence. 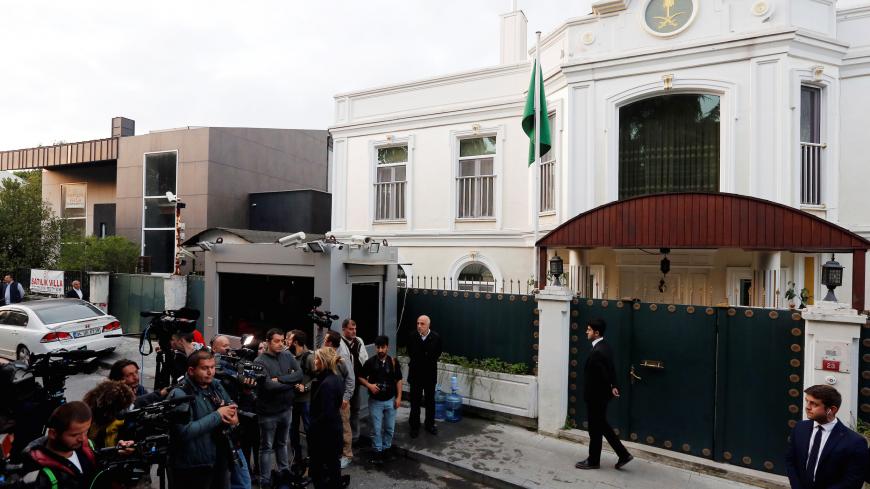 Members of the media wait for police and forensic experts to arrive at a residence of Consul General of Saudi Arabia Mohammad al-Otaibi in Istanbul, Turkey, Oct. 16, 2018. - REUTERS/Murad Sezer

Turkey’s pro-government media continued to publish new sensational allegations concerning dissident Saudi journalist Jamal Khashoggi, who vanished at the Saudi Consulate on Oct. 2, triggering international uproar. The latest claim carried by Yeni Safak on its front page was that one of the 15 members of the alleged Saudi hit squad, who it identified as Meshal Saad M. Albostani, a lieutenant in the Saudi air force, had died in a “suspicious traffic accident.” It then acknowledged, “There is no information about the details of the accident that left Albostani dead.”

Indeed, the steady drip-drip of guts and gore, including claims that Khashoggi was tortured, decapitated and dismembered by the men and his remains dissolved in a acid barrels, is beginning to lose its shock effect as the Turkish officials cited as sources have yet to formally disclose any of the information, some of which they say was captured on an audiotape.

US President Donald Trump said yesterday he had asked Turkey to turn over the purported recording. “I am not sure yet that it exists,” he said, but then threw in an added caveat, “Probably does, possibly does.”

Until Turkey goes public with the tape, nobody will know for sure that its exists, let alone that it's authentic.

There is growing criticism of Ankara for dangling these lurid tidbits, spurring claims that it's not spending the bullet until it's gauged what, if anything, it can extract from its newfound leverage over the Saudis.

Barcin Yinanc, a columnist for the English-language Hurriyet Daily News, speculated that Turkey might be after what she called “the big fish.” She was alluding to Saudi Crown Prince Mohammed bin Salman, who allegedly ordered Khashoggi’s abduction or death. The Washington Post columnist was a vocal critic of the crown prince’s crackdown on dissidents and his blood-soaked war in Yemen against Iran-backed Houthi rebels that has left millions of civilians facing a Biafra-style famine.

“Turkish authorities have shared information that would indicate the murder could not have happened without the direct knowledge of the crown prince, the kingdom’s de facto ruler. Is Ankara after the crown prince, … who has not particularly been fond of Turkey’s policies?” Yinanc asked.

But without Washington’s support in the matter, Turkish pressure alone cannot force change in Saudi Arabia’s succession and so far the Trump administration has been sending mixed signals. Thus, Turkish leaks seem to be designed as much to force Washington’s hand.

The 33-year-old crown prince, who has been touted as a reformer, is seen as critical ally in the administration’s efforts to roll back Iranian influence and enjoys warm relations with Trump’s son-in-law, Jared Kushner. He is also feted in Israel for reportedly having asserted that Israelis “have the right to own their own land” and for telling the Palestinians to either start accepting peace proposals or to “shut up” at a March meeting with Jewish leaders in New York.

Secretary of State Mike Pompeo’s talks with the Saudi king and crown prince failed to provide clarity, as did his subsequent meeting with Erdogan yesterday. But Pompeo was due to sit down with Trump today to chart a course of action. A face-saving exit for the Saudis would be very hard to pull off without Turkey’s cooperation and even then, calls for an independent investigation including from the United Nations are growing louder by the day. What sort of concessions, if any, would Ankara accept to help get the crown prince off the hook? The answer may well be none. But the longer Ankara withholds the evidence it claims to possess, the less credible the specifics surrounding Khashoggi's likely death sound.