Secretary of State Mike Pompeo defended himself from criticism that he appeared too eager to maintain business-as-usual relations with the Saudis, following the suspected gruesome murder of journalist Jamal Khashoggi at the Saudi Consulate in Istanbul. 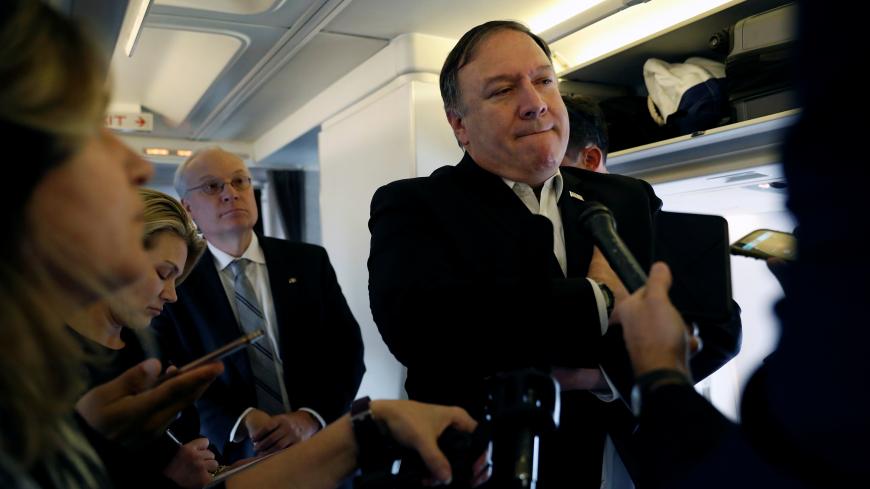 US Secretary of State Mike Pompeo speaks to reporters while his plane refuels in Brussels, Belgium, Oct. 17, 2018. - REUTERS/Leah Millis/Pool

WASHINGTON — Facing mounting criticism for appearing smiling and eager to maintain business-as-usual relations with his Saudi hosts yesterday, US Secretary of State Mike Pompeo insisted today that he has confidence in a Saudi investigation of the suspected murder of journalist Jamal Khashoggi, but conceded that the US administration does not want to see US-Saudi relations suffer depending on what they find.

“Look, we had very direct conversations about this, the seriousness of this, how serious President Trump is taking this, how seriously the United States will take this,” Pompeo told reporters traveling with him on a refueling stop in Brussels today after briefly stopping in Turkey for meetings with Turkish officials. “But, as for responses that the United States will take, we need to know the facts before we can begin to formulate what the appropriate response for this would be.”

“I do think it's important that everyone keep in their mind that we have lots of important relationships — financial relationships between US and Saudi companies, governmental relationships, things we work on together all across the world — efforts to reduce the risk to the United States of America from the world's largest state sponsor of terror, Iran," Pompeo continued. "The Saudis have been great partners in working alongside us on those issues.”

Pompeo was photographed looking upbeat and convivial with Saudi King Salman and Crown Prince Mohammed bin Salman (often known by his initials MBS) at his long meetings in Riyadh yesterday, which he called “incredibly successful.” He stayed overnight in the Saudi capital, yet he never left the airport in Ankara. He spent roughly 40 minutes meeting with Turkish President Recep Tayyip Erdogan, followed by a meeting with Turkish Foreign Minister Mevlut Cavusoglu. Neither Pompeo nor his Turkish hosts spoke to reporters after their meetings, and Pompeo’s plane departed Ankara only three hours after landing.

Just a few hours after Pompeo departed Turkey, the New York Times, citing a Turkish official and Turkish pro-government newspaper Yeni Safak, published a gruesome account of an alleged audio tape of Khashoggi’s torture and killing at the Saudi Consulate in Istanbul on Oct. 2. The alleged audio recording described the Saudi consul general asking the Saudi security team not to target Khashoggi in the consulate, fearing he would get in trouble, and a member of the team responding to the diplomat by telling him to shut up.

Pompeo, speaking to journalists in Brussels, declined to say if he had heard the audio recording, if one exists, but State Department spokeswoman Heather Nauert later told journalists that he had not.

US President Donald Trump said today the United States has asked for any such audio recording the Turks might have of what happened to Khashoggi, and wagered it probably does exist.

"Yes, we have asked for it … if it exists," Trump told journalists at an Oval Office pool spray today. It “probably does.”

“We will probably know [what happened] by the end of the week,” Trump added.

Saudi watchers told Al-Monitor that they were intrigued by a report by Washington Post columnist David Ignatius today suggesting that the Saudi investigation may identify an MBS ally, Saudi deputy intelligence chief Maj. Gen. Ahmad al-Asiri, as a ringleader in the plot that killed Khashoggi. Asiri previously served as a spokesman for the Saudi-led military coalition targeting Yemen — essentially as a spokesman for the crown prince, who also serves as Saudi defense minister. MBS promoted Asiri to deputy intelligence chief last year.

Asiri “has a history of being a bit of an aggressive guy, a friend of the crown prince,” a regional source, speaking not for attribution, told Al-Monitor. “But he did badly as a spokesman for the coalition, and was kicked upstairs. … As deputy head of intelligence, he would have the authority to interrogate Khashoggi. … Did he ask permission for a rendition? Saying it could be done, and it went south? Clearly, whatever the guy did … was incompetent.”

If the Saudis “go after Asiri, who has been in MBS’ circle for a long time, perhaps they are at least somewhat serious about accountability,” a former senior US official, speaking not for attribution, told Al-Monitor. “If they go after others, they may just be trying to use the crisis to re-position or promote MBS allies.”

Meanwhile, Bruce Riedel, a former National Security Council and CIA officer who is a columnist for Al-Monitor's Gulf Pulse, said that "the administration is desperately trying to keep their Iran policy on track, which is threatened by the Istanbul caper."

While the Trump administration has signaled its wariness about any fallout from the Khashoggi case leading to any rupture in US-Saudi relations, pressure is more likely to come from Congress.

As US sanctions on Iran’s oil and gas exports go into effect next month, the Trump administration is particularly desperate to avoid the Saudis refusing to pump more oil, which it fears could raise gas prices on voters and threaten Trump’s potential re-election chances.

“The Trump administration appears to believe that they are going to get a very healthy chunk of Iranian petroleum products off the market [when US oil sanctions on Iran go into effect] on Nov. 5,” the former senior US official said. “So they are terrified of driving up prices significantly. Thus, the administration feels that they cannot alienate the Saudis. If the Saudis are unwilling to pump more [oil], it could damage President Trump’s re-election chances. The drivers here include the collision of high-priority foreign policy goals (primarily Iran) and presidential electoral politics.”

The fallout from Khashoggi’s murder could very well, however, affect already growing congressional misgivings about US support for the Saudi/UAE military campaign in Yemen.

“Congressional skepticism about the Yemen war and this development will collide and could combine to form a perfect storm against the Saudis,” the former senior US official said. “I don’t think Congress will approve new arms sales for a while.”

“The Senators who wrote the administration about Khashoggi’s murder knew that they were triggering the Magnitsky Act and the full ramifications of the sanctions on those determined responsible,” the former senior US official said. “They were not kidding around.”