US 'focused on future conduct’ amid calls to sanction MBS 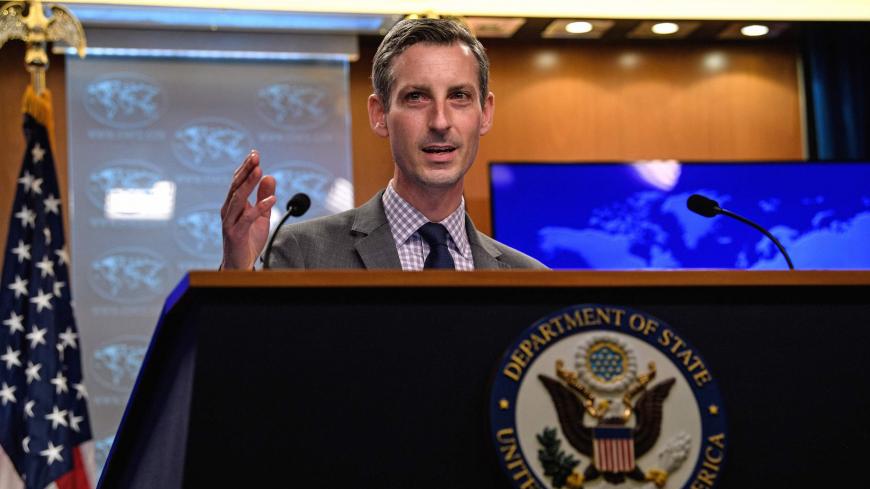 US State Department spokesman Ned Price gestures as he speaks during the daily press briefing at the State Department in Washington, DC, on Feb. 25, 2021. - NICHOLAS KAMM/POOL/AFP via Getty Images

The Biden administration is defending its decision to not personally sanction Crown Prince Mohammed bin Salman, despite a US intelligence report concluding Saudi Arabia’s de facto ruler was complicit in the killing of journalist Jamal Khashoggi.

“We are very focused on future conduct,” State Department spokesperson Ned Price told reporters on Monday. “We feel that we can have the most influence over this partnership when it is cast as a recalibration, not a rupture.”

“Were there to be something more dramatic, something more drastic than what we have talked about, I think the influence that we would have over any foreign leader — be it Mohammed bin Salman or any other world leader in question — would be greatly diminished,” Price added.

The long-awaited declassified report released by the Office of the Director of National Intelligence on Friday concluded that the crown prince, commonly referred to by his initials MBS, had “approved" the October 2018 operation that killed Khashoggi inside the Saudi consulate in Istanbul. Given his control over decision-making in the kingdom, the intelligence summary said it was “highly unlikely” that Saudi officials would have acted without his authorization.

Secretary of State Antony Blinken instead unveiled the “Khashoggi Ban” on Friday, which imposed visa restrictions on 76 unnamed Saudis who are accused of involvement in Khashoggi’s murder or have engaged in other “serious, extraterritorial counter-dissident activities.” Price on Monday declined to say whether MBS was on that list.

The Treasury Department also imposed sanctions on the alleged “ringleader” of the assassination, Ahmad Hassan Mohammed al Asiri, as well as the crown prince’s protective detail, known as the Rapid Intervention Force.

The Saudi government maintains that MBS had no knowledge of the Khashoggi operation, and on Friday the country’s Foreign Ministry dismissed what it said was a “negative, false and unacceptable” US report.

Human rights groups, as well as some Democratic lawmakers, have called on the Biden administration to do more to hold MBS accountable, especially given the president’s campaign pledge to make Saudi Arabia “pay the price” for killing Khashoggi.

"If we accept this behavior now, what does that mean for the next half-century?” tweeted Rep. Andy Kim (D-NJ), a former White House national security official. “The lack of action against the Crown Prince sends a clear message across the globe that those at the top can escape consequences.”

On Monday, Agnes Callamard, the United Nations special investigator of extrajudicial, summary or arbitrary killings, said it was “dangerous” to acknowledge MBS's role in the murder without also imposing consequences. Khashoggi’s Turkish fiancee, Hatice Cengiz, said failure to punish MBS would signal he “can get away with murder.”

In response to the mounting criticism, Biden officials have pointed out that their Saudi policy, which includes cutting off US support for the Saudi-led coalition in Yemen and a temporary freeze on arms sales to the Gulf kingdom, represents a significant departure from the Trump administration’s approach to Riyadh.

“The [US-Saudi] relationship is not going to look like what it looked like in the past,” White House Press Secretary Jen Psaki said in Monday’s press briefing, adding that the United States reserved the right to take further punitive actions.

Pentagon spokesperson John Kirby echoed Psaki’s comments, telling reporters on Monday that “the relationship from a bilateral perspective with Saudi Arabia is going to be different” but stressing that the military relationship with the kingdom will "remain robust.”

The Biden administration, which reversed the terror designation of Yemen’s Houthi rebels last month, has pledged continued support for Saudi Arabia’s defense. In response to the Houthis’ latest cross-border attacks, Price said on Monday that the United States is considering “additional steps to promote accountability for the Houthi leadership.”