Reuters reports the US intelligence assessment concluded "the crown prince approved and likely ordered the murder of Khashoggi.” 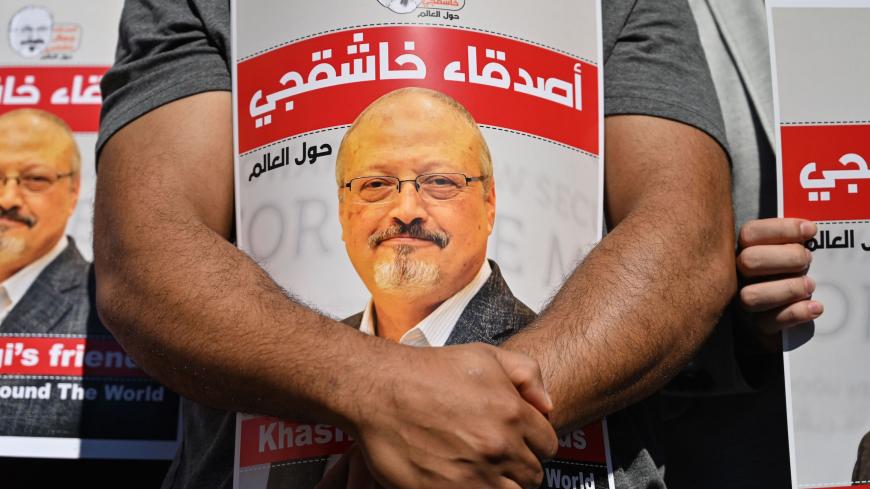 Friends of murdered Saudi journalist Jamal Khashoggi hold posters bearing his picture as they attend an event marking the second-year anniversary of his assassination in front of Saudi Arabia Istanbul Consulate, on Oct. 2, 2020. - OZAN KOSE/AFP via Getty Images

Biden “affirmed the importance the United States places on universal human rights and the rule of law," according to the White House readout of the call, adding that the two leaders discussed the war in Yemen and the US commitment to Saudi Arabia's defense. The White House didn't say whether Biden has raised the Khashoggi report, as expected, with his Saudi counterpart.

Khashoggi, a self-exiled former royal insider-turned-critic and US resident, was killed and dismembered at the Saudi consulate in Istanbul in October 2018. His remains were never recovered.

Citing four officials familiar with the matter, Reuters first reported that the declassified intelligence assessment, based largely on the CIA’s investigation, is scheduled for release Thursday and concludes “the crown prince approved and likely ordered the murder of Khashoggi.”

Former President Donald Trump dismissed his own intelligence community’s findings, refusing to blame the 35-year-old prince and reportedly bragging to journalist Bob Woodward that he shielded the Saudi royal from accountability in Congress.

The Trump administration sanctioned 17 Saudi officials for their alleged involvement in the murder, but stopped short of punishing MBS, as he’s widely known. Trump also refused to produce a declassified report on the Khashoggi killing, even as a law passed by Congress in 2019 required the administration to do so. The White House argued the report compiled by the Office of the Director of National Intelligence (ODNI), if made public, could undermine sources and methods.

The Saudi government maintains that Khashoggi was killed in a “rogue” operation without Prince Mohammed’s prior knowledge. But a 2019 UN report found it “inconceivable” that the crown prince wouldn’t have been, at a minimum, aware of the operation.

MBS told '60 Minutes' that the murder was a 'heinous crime,” adding that he took “full responsibility as a leader in Saudi Arabia, especially since it was committed by individuals working for the Saudi government.” A Riyadh court in September jailed eight unnamed defendants for involvement in Khashoggi's murder, but the trial was widely denounced as a sham by human rights experts.

Abdullah Alaoudh, the Saudi Arabia research director at Democracy for the Arab World (DAWN), a DC-based organization founded by Khashoggi, said it’s essential for the Biden administration to name names, but what comes next is equally important.

The US should “deal with MBS like we did with every other member of the killing team,” said Alaoudh. “He should not be an exception to the rule of law.”

DAWN and other human rights groups are calling on the Biden administration to impose further travel bans and financial sanctions on senior Saudi officials, including MBS. They’re also seeking the disclosure of other records related to Khashoggi, including the full CIA report and a tape recording of the murder.

The ODNI report’s expected release comes as Biden looks to “relicabrate” the US-Saudi relationship, having criticized Riyadh for its human rights abuses and promised during the campaign to make the conservative country a “pariah” on the world stage.

White House Press Secretary Jen Psaki said Biden will only be dealing with his counterpart, King Salman, not MBS. Secretary of Defense Lloyd Austin placed the administration’s first call to Prince Mohammed, who is also the kingdom’s defense minister. The two discussed Houthi attacks directed at Saudi Arabia from Yemen, where Biden has pulled US support for the Saudi-led coalition's offensive operations.