The Khashoggi affair is the latest example of how Crown Prince Mohammed bin Salman has become a liability for Saudi Arabia. 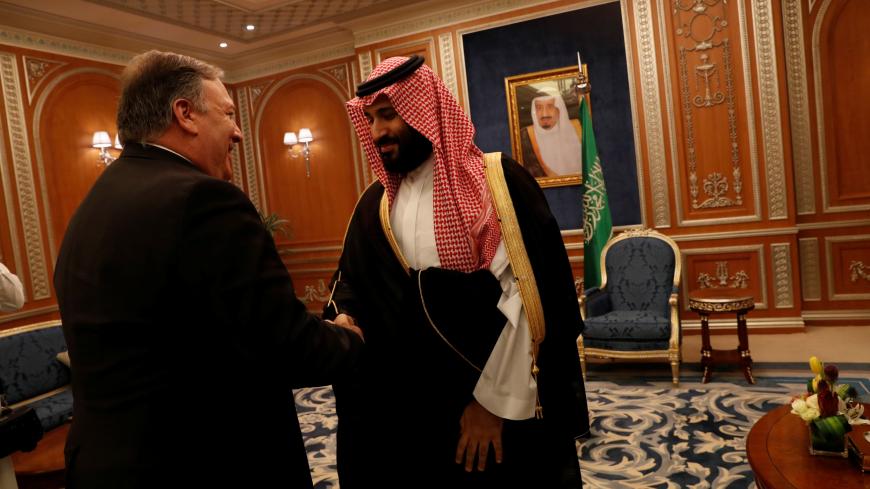 The pathetic Saudi explanation of the state-ordered murder of Jamal Khashoggi reflects the fragility of Crown Prince Mohammed bin Salman’s position. The cover-up is trying to put the blame for Khashoggi’s brutal execution on the Saudi intelligence service, the General Intelligence Directorate. America’s oldest partner in the Middle East is increasingly a danger to regional stability and its own stability.

After 17 days of procrastination, the Saudis announced that Khashoggi is dead, and that 18 Saudi officials have been detained, including 15 who flew to Istanbul and back Oct. 2 when Khashoggi was killed. Five others have been removed from office, including Maj. Gen. Ahmed al-Asiri, who is accused of being the mastermind of the operation in Istanbul. Khashoggi’s body has not been recovered. The Turks are said to have tapes that recorded the gruesome murder and will undercut Saudi claims of a fistfight that got out of control.

A detailed examination of the Saudis who traveled to Istanbul on Oct. 2 shows almost all are security figures. They are royal guards, special forces, intelligence and Royal Saudi Air Force. Usually colonel level. The royal guards are the most represented. The Royal Guard Regiment reports directly to the crown prince. It is inconceivable that Mohammed would not know about what they were doing.

Using the passports of the 15 published by the Turkish press, The Washington Post made a cross-check with US passport records. About half show up entering and exiting the United States, always when Mohammed or his father was also in the country. The connection to the royal court and the crown prince is clear.

Asiri, who was removed as deputy chief of the General Intelligence Directorate, was the spokesman for the Yemen war from the outset. That puts him very close to Mohammed. They meet constantly. At the beginning of the war, Mohammed was eager to be seen as the commander of what was then called Operation Decisive Storm. When it became clear it was not decisive, Asiri became the public face of the war. The war has left 13 million Yemenis malnourished in what the United Nations says is the worst famine in a century.

Asiri was not very good at selling the war and blockade. He provided little hard data and was constantly exaggerating Saudi successes. Of course he denied any responsibility for bombing schools, hospitals and other civilian targets or for the blockade that prevents the entry of needed food and medicine. He lost credibility. He was promoted to intelligence because he was loyal.

Making him the fall guy will send a very dangerous message to the crown prince’s inner circle: You are not safe. No one is safe. That will increase the odds of a move against the crown prince. Mohammed is already increasingly impulsive and erratic.

Mohammed also has made many enemies at home. Just a year ago he ordered the detention of 326 prominent businessmen and royal princes in the Ritz-Carlton hotel in Riyadh. Some were tortured. Most surrendered property or cash to secure their release. At least 56 refused to be shaken down and are still in prison. Among those detained without charge are some of the most prominent members of the family with large numbers of loyalists.

King Salman bin Abdul-Aziz Al Saud has removed two crown princes from the line of succession in three years. Many in the family are quietly whispering in his ears to do the same to Mohammed. It was Salman who made possible his son’s accumulation of unprecedented power, however, and the release of an incoherent cover-up story suggests that the king stands by his son. Without the king's involvement there is no process for deposing the crown prince. Mohammed may be a pariah for the rest of his life, deservedly, but one who is in power.

This leaves his opponents at home only one alternative. Senior officials have told me that they are concerned about plotting to remove the prince by force. King Faisal was assassinated in 1975 by a disaffected prince.

The crown prince is shaking up the General Intelligence Directorate now. The shake-up is more about using the organization to spy on Saudi dissidents at home and abroad than finding the killers of Khashoggi. It’s another sign of the deep anxieties in the royal palace about conspiracies.

The Trump administration is eager to move on from the Istanbul caper. Saudi Arabia is crucial to its policy to confront Iran. The kingdom is the leading Sunni opposition to the Shiite state. Saudi oil is crucial for filling up the markets when sanctions reduce Iranian exports without prices going up. The administration will face a skeptical public, however, and more revelations about the murder will erode the cover story.

The Khashoggi affair will also require an explanation for why the kingdom should not be put into the state sponsors of terrorism list produced by the State Department annually. Of course, the administration will not list the Saudis but the media should ask why not? Using state security services to murder a journalist in a diplomatic facility is a blatant abuse.

The Saudis' own self-interest argues for avoiding any chance of yet another blunder like the war in Yemen, the Ritz-Carlton shakedown and the Istanbul caper. As long as Mohammed bin Salman is crown prince, however, it is only a matter of time.