What happened to Jamal Khashoggi?

The disappearance of Jamal Khashoggi from the Saudi Consulate in Istanbul highlights, once again, the House of Saud's division on the war in Yemen and the crown prince's decision-making. 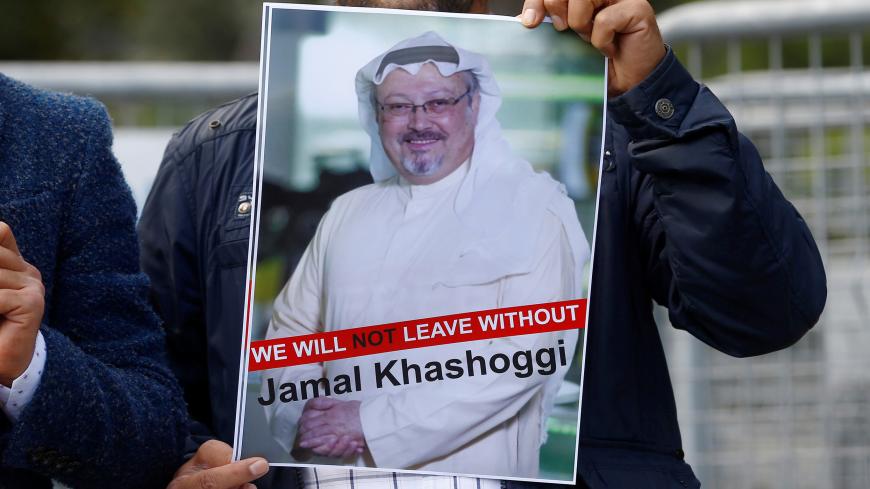 A demonstrator holds a picture of Saudi journalist Jamal Khashoggi during a protest in front of Saudi Arabia's consulate in Istanbul, Turkey, Oct. 5, 2018. - REUTERS/Osman Orsal

We may never know what exactly happened to Jamal Khashoggi in the Saudi Consulate in Istanbul last week. The crocodile tears of the crown prince and other Saudi officials are probably for deception and prevarication. The disappearance of Khashoggi fits with a pattern of crude intimidation and the silencing of criticism and dissent.

Turkish sources are saying Khashoggi was murdered inside the consulate Oct. 2 and his body secretly sent to the kingdom. Saudi dissidents said as much days ago. The Saudis have offered the Turks permission to search the consulate, which strongly suggests he was removed alive or dead by the Saudi security services.

Khashoggi’s loyalty to his country has never been in doubt. He was a long-time aide to Prince Turki al-Faisal, the Saudi intelligence chief and later ambassador to the United Kingdom and the United States. His criticism of his country’s policies have always been more from disappointment than anything else.

Khashoggi has been living in exile in the United States since Saudi Arabia warned him to stop criticizing the crown prince. His last column for The Washington Post was about Crown Prince Mohammed bin Salman’s signature policy initiative: the war in Yemen. As a brand-new 29-year-old defense minister in 2015, the prince drove the Saudi decision to intervene in a Yemeni civil war against the Zaydi Shiite Houthis. The prince is notoriously thin-skinned about any criticism, but he is especially alarmed by criticism of his war that has created the world’s worst humanitarian catastrophe, weakened the kingdom and benefits Iran.

In the Post article, Khashoggi called for the Saudis to immediately cease fire and accept a national truce. He proposed Riyadh should offer to host peace talks in Taif, the scene of previous Saudi mediation. It should work with the Houthis, South Yemeni secessionists, the Hadi government and all Yemeni political forces to find a political solution to the war.

At stake, Khashoggi argued, is Saudi “dignity” and its role as a leader in the Islamic world. The three-plus years of war and blockade have tarnished the Saudis. It has rightly been seen as an ineffectual bully. Saudi Arabia’s war is alienating people around the world including in its key arms suppliers of Washington and London. Across the Muslim world, the Saudi brand has been damaged. Khashoggi said the kingdom increasingly is morally no different from Syrian President Bashar Assad and the Iranians in the brutality of the wars in Syria and Yemen. That’s a very strong indictment.

The Post piece was very clear that the crown prince bears the full responsibility for the war and the carnage it is inflicting, including inside Saudi Arabia. This mirrors the public accusation by the king’s half brother Prince Ahmed that Prince Mohammed — not the royal family — is the perpetrator of the war. The evidence is mounting that behind the scenes the House of Saud is deeply divided by the war in Yemen and the crown prince’s decision-making.

The division within the royal family is undoubtedly alarming to Mohammed. His father provides protection for now; his legitimacy is unquestioned. But his son is the first aspirant to the throne who is not a son of Ibn Saud, the founder of the modern kingdom. His legitimacy is inherently questionable. Succession quarrels are always the Achilles' Heel of absolute monarchies.

Saudi Arabia has a long history of abducting dissidents from abroad. But the pace has stepped up in recent years. A BBC special report says at least two Saudi princes have been abducted since King Salman ascended to the throne in 2015.

The crown prince was also the major driver behind the mass detention of Saudis last November at the Ritz-Carlton in Riyadh. Some are still in prison. Former Crown Prince Muhammad bin Nayef remains under house arrest. Women dissidents were detained by the prince, one may be executed. A prominent religious figure is also under threat of execution for opposing the boycott of Qatar. Saudi Arabia expelled the Canadian ambassador for criticizing its human rights behavior.

The pattern is clear. Even Prince Mohammed’s boosters in the West can see the facts. But the crown prince undoubtedly believes that the Trump administration will do nothing about human rights violations in Saudi Arabia. He is probably right.