King Salman is back in the saddle

With the crown prince's international reputation tarnished, King Salman of Saudi Arabia has stepped in and resumed traveling, hoping to regain control of the kingdom's image abroad. 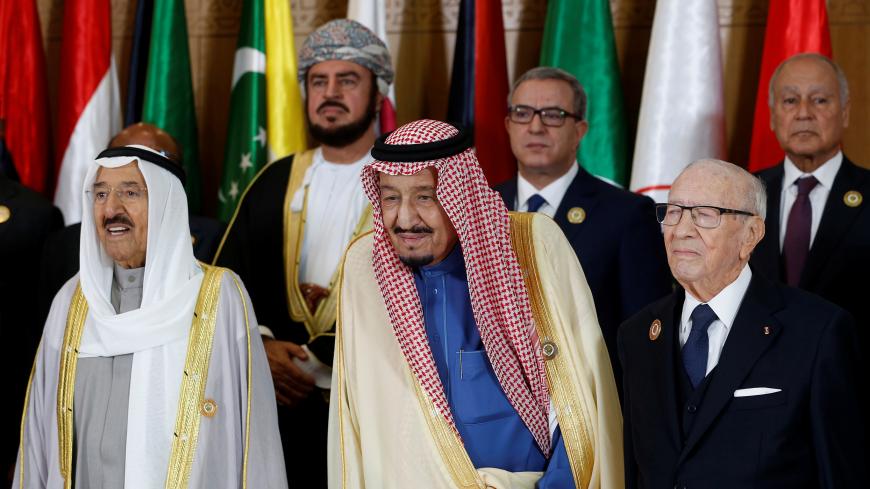 After avoiding foreign travels for over a year, Saudi Arabia’s King Salman has been very active in the last 60 days, traveling across the Arab world. The toxic shadow over his favorite son, Crown Prince Mohammed bin Salman, known as MBS, is undoubtedly a factor in the king’s higher profile. The Saudis are struggling to regain control of their international image.

In his first years on the throne after his 2015 ascension, the king was a typical royal traveler. He made state visits to many countries in the Middle East as well as to the United States, Britain, Japan, China, Indonesia and Russia. He also typically took an extended summer vacation in France or Morocco. His schedule was never hectic, but it was thorough.

The pattern stopped in late 2017, when several hundred prominent Saudis were forcefully incarcerated in the Ritz Carlton hotel. This was part of a self-proclaimed anti-corruption campaign, yet many have said it was more like a mafia shakedown. For more than a year (and all of 2018) the king did not travel outside the kingdom. The crown prince was the driver behind the Ritz Carlton affair, which alienated many prominent Saudis, including important members of the House of Saud.

Along with my colleague Israa Saber at the Brookings Institution, I speculated last year about the reason behind the hiatus in foreign travels. Health may have been a factor, but ill Saudi kings actually tend to spend more time abroad to get medical attention. More likely, tensions within the royal family over the crown prince’s behavior was the answer. The king didn’t want to leave the kingdom while it was unsettled.

The premeditated murder of Jamal Khashoggi in the Saudi Consulate in Istanbul in October 2018 only added to the tensions. The crown prince is widely blamed for the killing and for a host of other human rights abuses. According to one account, the king has opened an investigation into such abuses without his son’s agreement. Detailed medical reports of prisoner abuse have been prepared for the king. Nonetheless, more womens' rights activists were detained this week.

The outcry about the crown prince’s behavior directly led to the king’s first foreign travel this February to Egypt for a joint summit meeting of the Arab League and the European Union. EU leaders made it clear before the meeting in Sharm el-Sheikh that they would not meet with the crown prince. Not only is he tainted with the Khashoggi caper, but he is also seen as the driver behind the kingdom’s disastrous war in Yemen. So the king went to Egypt for three days, his first foreign venture since a trip to Russia in October 2017.

Then the king held a high-profile meeting with Libya’s rebel general, Khalifa Hifter, in Riyadh in late March, the top Saudi leadership's first meeting with Hifter since the general began his campaign to take control of Libya. Since the meeting in Riyadh, Hifter has launched an attack on Tripoli, apparently with the king's blessing. It was an unusually high-level reception for the Saudi king to give to a non-head of state.

The king then traveled to attend the Arab summit in Carthage, Tunisia, in late March. Salman forcefully reiterated Saudi support for an independent Palestine with its capital in Jerusalem and for the return of the Golan Heights to Syria, positions at odds with the Donald Trump administration. The reaffirmation of Saudi support for the Arab peace plan stood at variance from the much rumored speculation that the crown prince is colluding with the Trump team on the so-called deal of a century, or even considering a direct meeting with Israeli officials. It has been a pattern: The king reinforces his commitment to well-established Saudi positions on Israel whenever the Trump administration breaks with historic American positions in favor of Israel, or reports surface that MBS is soft on Israel.

This week the king traveled again to neighboring Bahrain for a day of meetings in Manama with King Hamad bin Isa Al Khalifa. Salman delivered on a previous Saudi commitment to bail out the island kingdom from its economic problems. Saudi troops have been on the island since 2011 to keep Hamad in power. There is no sign that will change.

King Salman is picking up the pace of royal travel as his son finds it more and more problematic. MBS was told he was not welcome in Morocco last December by King Mohammed and was snubbed by then-president of Algeria Abdelaziz Bouteflika on the same trip. His visit to Asia this winter was marked by postponing visits to Indonesia and Malaysia on short notice with no explanation. The outcry about Khashoggi and Yemen is even more intense in Europe, Canada and the United States. The Hill has now passed a bill prohibiting American support for the war in Yemen, one Trump will likely veto but that still marks an unprecedented use of the war powers legislation to end America’s participation in a war. It should be a wake-up call to our Gulf allies.

The king’s resumed foreign travel is a short-term solution to a long-term problem for the House of Saud. The heir apparent is burdened with severe negative personal baggage as a consequence of his behavior over the last four years. His image outside the kingdom is not getting better. Demands for further investigation into the Khashoggi murder by human rights groups are only becoming more urgent. Those who hailed MBS as a reformer only a year ago have abandoned him. And Trump standing by him is not a very positive form of help given Trump’s own unpopularity in much of the world.