Saudi Arabia's king and crown prince are touring the country and region to drum up support for the heir apparent, whose thuggish behavior has alarmed many in the royal family and abroad. 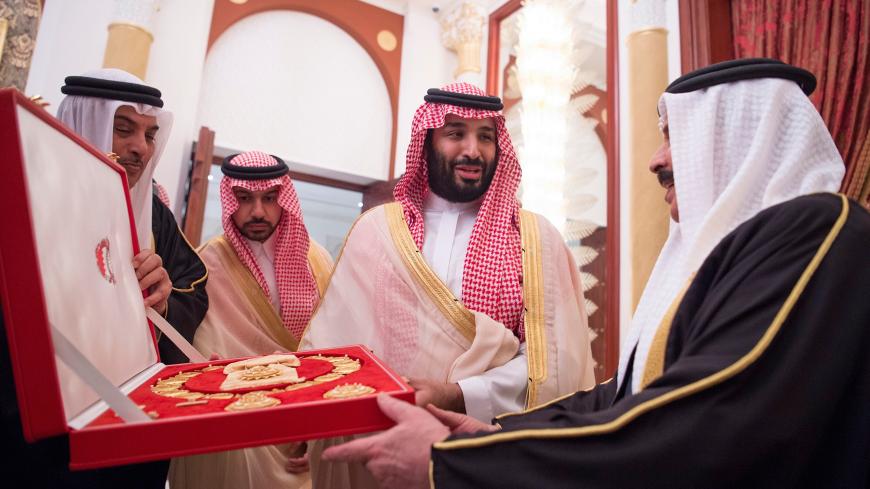 The premeditated murder of journalist Jamal Khashoggi in Istanbul last month was an act of terrorism. The Saudis are desperately trying to salvage the reputation and credibility of Crown Prince Mohammed bin Salman, who undoubtedly ordered the assassination. The Donald Trump administration is colluding with Riyadh. But revelations about the prince continue to emerge, further sullying his brand. At home there is unease in the royal family about what his tarnished reputation means for the kingdom.

The prince has done a tour of the kingdom with his father to shore up support at home. It concluded in Tabuk near the Gulf of Aqaba with billions of dollars in new projects and investment promised for the remote province. It is rumored in Riyadh that King Salman bin Abdul-Aziz Al Saud may retire to Tabuk if his health deteriorates further. He has recently built a new palace in the region.

Next is a regional tour starting in Abu Dhabi with a visit to the prince's closest ally, Crown Prince Mohammed Bin Zayid. MBZ, as he is called, has staked the Emirates future on the Saudi crown prince, who is also known as MBS. The Emirates is potentially the biggest loser if his Saudi protege continues to implode. Already Saudis have become resentful of the outsize influence the Gulf leader has in the kingdom.

The prince is also visiting two Saudi clients, Bahrain and Egypt, both with horrendous human rights records. Bahrain has been occupied by the Saudi National Guard since 2011. The Saudis played a key covert role in the 2013 coup that brought Egypt’s President Abdel Fattah al-Sisi to power. MBS is assured of fawning receptions on the tour. Stops elsewhere are likely to be less harmonious.

The prince is also scheduled to represent the kingdom at the G-20 summit in Buenos Aires at the end of the month. The Americans, Russians and Chinese are sure to fawn as well but the Europeans will be colder audience. Turkish President Recep Tayyip Erdogan will keep his distance.

Desperately seeking rehabilitation, the crown prince is hoping the world will forget about Khashoggi and move on. So is Trump. But the reality is that the Saudi leader has a closet full of skeletons and horrors that won’t be shut.

The war in Yemen tops the list. After more than three years of war, 18,000 coalition airstrikes and the crippling blockade, 18 million Yemenis are at risk of malnutrition and disease. Save the Children estimates that more than 85,000 children under the age of five have already starved to death in the war. The coalition is pouring weapons in to the country, arming various fractious militias. There are so many weapons in the country that Yemen is an exporter of small arms to other countries in the region.

The Yemeni catastrophe is MBS's signature policy initiative, and he has been the biggest obstacle to a cease-fire. According to several sources, MBS threw a temper tantrum when the British suggested a truce earlier this month. His outburst did not stop London from proposing a new UN Security Council resolution and pressing for a cease-fire. The Labor opposition wants to go further and bring war crime charges against the Saudi and coalition leaders, specifically naming MBS as the man most responsible for the war and the humanitarian catastrophe.

At home, new revelations about the torture of female dissidents and advocates of gender equality were uncovered last week by several human rights groups. The exposure is undermining the prince's carefully crafted image of a reformer who gave women the right to drive. Some human rights advocates say that they have deliberately held back some details of the abuses for now. The truth is bound to leak.

In the United States, Trump has tried to exonerate the prince by claiming that the evidence of his involvement in the murder is not conclusive. Few believe him. Congress is looking for ways to distance the country from the Saudi prince and his policies. One that is likely to enjoy widespread support is to deny the kingdom access to nuclear power.

The crown prince has publicly said he would pursue nuclear weapons if Iran does. Since the Saudis encouraged Trump to violate the Joint Comprehensive Plan of Action that curbs Iran’s nuclear arms project, his statement should be taken as an admission of intent. Moreover, the idea of nuclear weapons in the hands of a reckless and impulsive murderer is unthinkable.

Despite the campaign to rehabilitate MBS’ image, there is mounting evidence that the royal family is concerned about how his actions have damaged the kingdom. The mass incarceration of royals and entrepreneurs last year at the Ritz-Carlton shakedown alienated important branches of the family, including the sons of former Kings Fahd and Abdullah. The clerical establishment is also uncertain about the crown prince's behavior. His intense anti-Shiism is a plus but some of his reforms are the opposite.

The security establishment has been embarrassed by the failure in Yemen. The all-powerful Interior Ministry was the stronghold of the Nayef wing of the family and now former Crown Prince Mohammed bin Nayef is under house arrest. The foremost counterterrorism leader in the country is incommunicado.

The crown prince rules by terror, not consensus. His ascent to power has been entirely the work of his father, and the king seems determined to stick with his son. Nonetheless, the region is rife with speculation about the kingdom's future and how it will play out. Will the king retire early? Will the family accept MBS? Will the security apparatus turn on the crown prince if he executes officials who were doing his bidding?

The only certainty is that the crown prince is likely to remain a reckless and dangerous player. Istanbul will not be the last debacle he leads the kingdom into.