President Trump's bizarre statement on the murder of Jamal Khashoggi made clear that he would not be holding Crown Prince Mohammed responsible for the journalist's death. 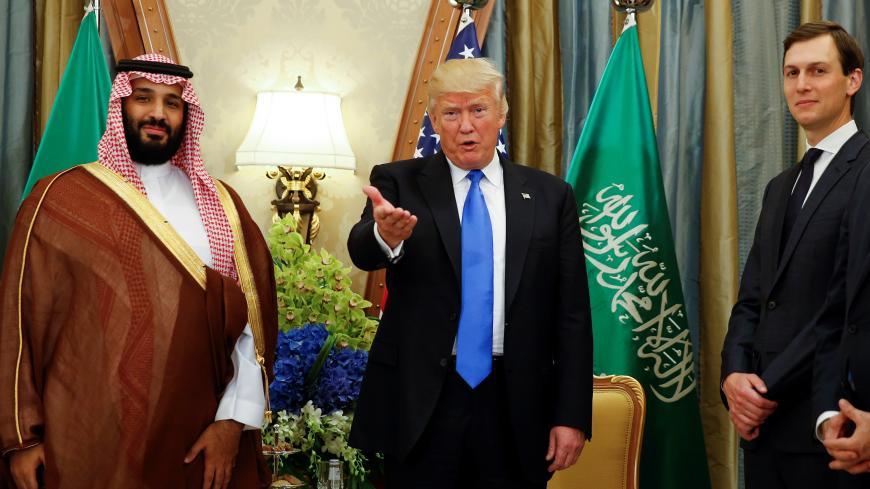 WASHINGTON — US President Donald Trump, in a bizarre written statement, said today that maybe Saudi Crown Prince Mohammed bin Salman authorized the killing of journalist Jamal Khashoggi, but argued that regardless, preserving good relations with the Saudi kingdom is in the United States’ national interests.

“Representatives of Saudi Arabia say that Jamal Khashoggi was an ‘enemy of the state’ and a member of the Muslim Brotherhood, but my decision is in no way based on that — this is an unacceptable and horrible crime,” Trump said in the eight paragraph statement that began and ended with “America first!”

“King Salman and Crown Prince Mohammad bin Salman vigorously deny any knowledge of the planning or execution of the murder of Mr. Khashoggi,” the statement continued. “Our intelligence agencies continue to assess all information, but it could very well be that the Crown Prince had knowledge of this tragic event — maybe he did and maybe he didn’t!”

“That being said, we may never know all of the facts surrounding the murder of Mr. Jamal Khashoggi,” he continued. “In any case, our relationship is with the Kingdom of Saudi Arabia. They have been a great ally in our very important fight against Iran. The United States intends to remain a steadfast partner of Saudi Arabia to ensure the interests of our country, Israel and all other partners in the region. It is our paramount goal to fully eliminate the threat of terrorism throughout the world!”

Veteran former CIA and National Security Council official Bruce Riedel, a columnist for Al-Monitor’s Gulf Pulse, said Trump’s message of, essentially, “I don’t really care if he did it,” was unsurprising.

“Typical,” Riedel, now with the Brookings Institution, told Al-Monitor. “The president doesn’t want to know because the entire edifice of his Middle East policy collapses if MBS is a premeditated murderer,” using the initials by which the Saudi crown prince is often called.

“He's right about the importance of Saudi Arabia, but everything else about the message is all wrong,” said former US diplomat Gerald Feierstein.

Trump’s statement was issued shortly after senior US administration officials, on a background call with journalists on new US sanctions designations, said they had no information about a US report on Khashoggi’s case that Trump had told journalists over the weekend would be released early this week.

The administration will “be having a very full report over the next two days, probably Monday or Tuesday,” Trump told journalists on Saturday, that would assess “who did it.”

Trump has repeatedly expressed reluctance to let revelations about the Saudi regime’s role in Khashoggi’s killing at the Saudi Consulate in Istanbul on Oct. 2 impact US relations with the kingdom, which is central to his administration’s economic pressure campaign against Iran, fight against terrorism and an important customer for US weapons exports to the Gulf.

But if MBS found comfort in Trump’s message that he is willing to essentially overlook any role the crown prince may have played in sending a hit team to kill Khashoggi, it’s worth noting that Trump’s statement also made clear that he has no real sentimental attachment to MBS in particular. The US relationship with the kingdom is what he said is important.

“Our relationship is with the Kingdom of Saudi Arabia,” Trump’s statement said.

“The United States will continue to have a relationship with the Kingdom of Saudi Arabia … it is an important partner of ours,” Secretary of State Mike Pompeo said at a press conference this afternoon. “That is the commitment that the president made today.”

On Monday, Reuters reported that some members of the Saudi royal family have been seeking to try to prevent Prince Mohammed from becoming the future Saudi king.

“They recognize that the king is unlikely to turn against his favorite son, known in the West as MbS,” Reuters wrote, citing three unnamed sources close to the royal court.

“Rather, they are discussing the possibility with other family members that after the king’s death, Prince Ahmed bin Abdulaziz, 76, a younger full brother of King Salman and uncle of the crown prince, could take the throne, according to the sources.”