The Lebanese prime minister now has one on the crown prince; Mohammed bin Salman goes after his inner circle; Netanyahu needs Putin for possible deal on the Golan. 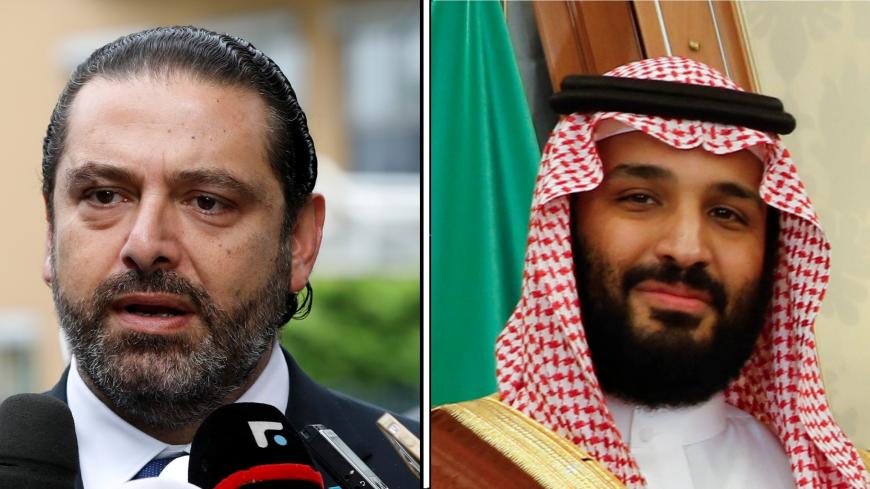 Lebanese leader Saad Hariri (L) may benefit from the troubles of Saudi Crown Prince Mohammed bin Salman (R). Hariri was speaking to the media in front of the Special Tribunal for Lebanon in the Hague, the Netherlands, Sept. 11, 2018, while Mohammed was meeting with President Donald Trump at the Ritz-Carlton hotel in Riyadh, Saudi Arabia, May 20, 2017. - Bas Czerwinski/Pool via REUTERS (L) and REUTERS/Jonathan Ernst (R)

Saudi Crown Prince Mohammed bin Salman’s come-uppance over the murder of Jamal Khashoggi at the kingdom’s consulate in Istanbul is a windfall for Saad Hariri, who is on the verge of forming a new government in Lebanon.

Last month we wrote that Hariri has “felt the burn from being too close to the Mohammed bin Salman flame” and that the delay in forming a new Lebanese government might have been because Hariri was “waiting for a call from Riyadh” that might not be coming.

Following the Khashoggi murder, that call is definitely not coming. Mohammed’s plight has been a kind of liberation for Hariri, who we wrote last year was “his own witness in a court of conscience” following his captivity under the crown prince. Hariri now has one over his former patron and tormenter. The prime minister, who has kept his own counsel on the details of his captivity until now, could be a potential witness against Mohammed by testifying about the crown prince's previous behavior.

If Khashoggi’s murder had not occurred, the tables might have been turned: Hariri might not have been able to be on the verge of forming a government, and thereby might have been living in fear of Mohammed's whims and reach. As both prime minister and potential witness, Hariri is able to obtain a kind of immunity from further vendetta. The Lebanese people, the international community and probably many or most of the Saudi ruling family will have no stomach for another crown prince-induced spectacle.

No one is safe in crown prince's inner circle

“The pathetic Saudi explanation of the state-ordered murder of Jamal Khashoggi reflects the fragility of Crown Prince Mohammed bin Salman’s position,” writes Bruce Riedel. “The cover-up is trying to put the blame for Khashoggi’s brutal execution on the Saudi intelligence service, the General Intelligence Directorate. America’s oldest partner in the Middle East is increasingly a danger to regional stability and its own stability.”

“A detailed examination of the Saudis who traveled to Istanbul on Oct. 2 shows almost all are security figures,” Riedel reports. “They are royal guards, special forces, intelligence and Royal Saudi Air Force. Usually colonel level. Royal guards are the most represented. The Royal Guard Regiment reports directly to the crown prince. It is inconceivable that he would not know about what they were doing. … About half show up entering and exiting the United States, always when Mohammed or his father was also in the country. The connection to the royal court and the crown prince is clear.”

Mohammed has called out Maj. Gen. Ahmed al-Asiri, deputy chief of the General Intelligence Directorate, as the mastermind of the operation.

“They meet constantly,” Riedel writes. “Making him the fall guy will send a very dangerous message to the crown prince’s inner circle: You are not safe. No one is safe. That will increase the odds of a move against the crown prince. Mohammed is already increasingly impulsive and erratic.”

Riedel adds, “King Salman bin Abdul-Aziz Al Saud has removed two crown princes from the line of succession in three years. Many in the family are quietly whispering in his ears to do the same to Mohammed. It was Salman who made possible his son’s accumulation of unprecedented power, however, and the release of an incoherent cover-up story suggests that the king stands by his son. Without the king's involvement there is no process for deposing the crown prince. Mohammed may be a pariah for the rest of his life, deservedly, but one who is in power.”

Israeli Prime Minister Benjamin Netanyahu said Oct. 8 that the “international community must recognize” Israel’s claim to the Golan. “As long as it is dependent on me,” he added, “the Golan Heights will remain under Israeli sovereignty. Otherwise we will get Iran and Hezbollah on the banks of the Kinneret [Sea of Galilee].”

Bibi’s campaign applause line was received with a thud in Washington, Moscow and most capitals. “The Golan Heights are not on anyone’s agenda right now,” Yossi Beilin writes. “No one is demanding that we return them to the Syrians at this stage. Nevertheless, nor would anyone in the world be prepared to recognize Israel’s annexation of the territory, either before or after Netanyahu’s remarks. As far as Jerusalem is concerned, the Golan Heights are a bargaining chip, which could help Israel to reach an agreement with Syria, Iran and Hezbollah, when the timing is right. Efforts to move masses of Israeli citizens to the Golan Heights have failed, so that there are now more non-Israelis than Israelis there. Demilitarization would be an Israeli condition, but if the Syrians agreed to this, it is reasonable to assume that Israel would be ready to withdraw. Even if the parties continued to dispute Syria’s demand to reach the waterline of the Sea of Galilee, this could be resolved by a series of access agreements.”

Netanyahu knows he can’t count on Russian President Vladimir Putin to keep the peace on Israel’s northern border indefinitely. Putin is not UNIFIL; he does not see himself as the region’s policeman, and he doesn’t work for free. And the risk of inadvertent conflict is growing, especially following Syria’s downing of a Russian Il-20 reconnaissance plane following what Russia termed an Israeli provocation. Russia has since provided Syria with S-300 air defenses, which Israel considers escalatory.

“Moscow reportedly rejected at least two Israeli proposals for meetings after the Il-20 incident,” Maxim Suchkov reports. “It declined to host a delegation led by national security adviser Meir Ben-Shabbat or to accept Defense Minister Avigdor Liberman or Netanyahu himself, saying that it ‘preferred for contacts to remain at the professional level.’ Now that Russia has made the move it felt obliged to make after the Ilyushin's downing, Moscow may be more open to high-ranking contacts.”

“Despite apparent differences in approach to conflict management between the Defense Ministry and the Kremlin,” adds Suchkov, “the ultimate concern in Moscow is to make sure its response, though harsh and just — as it should be, in Russia’s view — nonetheless does not corner Netanyahu at home, especially in light of his facing criminal charges and political difficulties in upcoming elections. Putin’s ‘good chemistry’ with Netanyahu has proven an asset that is considered to be in the mutual interest of the two countries, which have faced a sudden stress test.”

“That Israeli jets have not bombed Syria in the last couple of weeks is understandable, since doing otherwise under the current circumstances would mean poking the Russians in the eye,” writes Suchkov. “Yet, it does not mean that Israel will hold back on strikes should it see movements of pro-Iranian forces as menacing. The decision-makers in Moscow are well aware of this. Thus, the situation will continue to demand that both parties maintain the de-confliction line and follow the rules of engagement as well as look for a ‘happy medium’ on Iran within the context of Russia believing that it has done enough and Israel being certain that there can never be ‘enough’ when it comes to restraining Tehran in Syria or Lebanon.”