Turkey tightens the screws on Saudi Arabia over Khashoggi murder

Interpol has issued “red notices,” on Ankara’s request, for a total of 20 Saudi citizens suspected of involvement in the killing of dissident Saudi journalist Jamal Khashoggi. 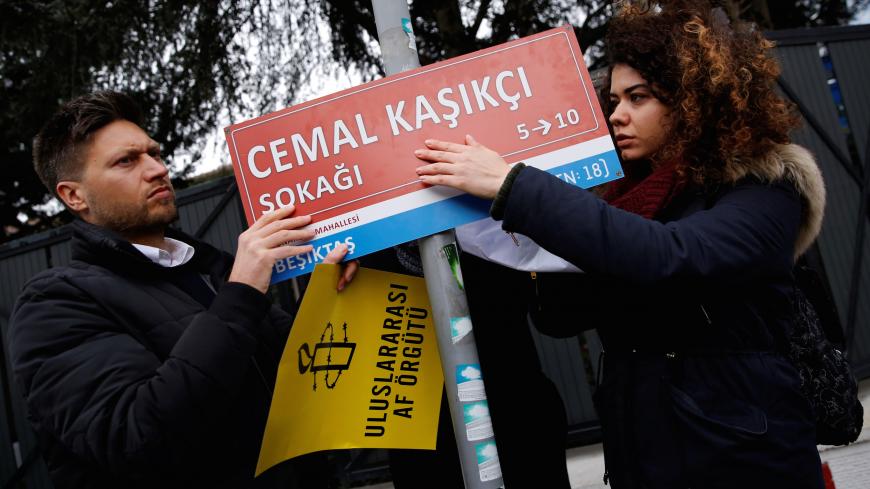 Turkey is determined to increase the pressure on Saudi Arabia over the killing of dissident Saudi journalist Jamal Khashoggi, even if hopes for justice, in this case, remain elusive.

Continuing calls by the United Nations, the US Congress, the European Parliament and international human rights watchdog groups on Riyadh to come clean over this murder are, nevertheless, encouraging for Ankara.

Ankara’s commitment to tightening the screws on Riyadh appears to be providing some results, too, despite its frustration over what it sees as insufficient international action against Saudi Arabia.

The Turkish Ministry of Justice announced March 14 that Interpol had issued “red notices,” on Ankara’s request, for a total of 20 Saudi citizens suspected of involvement in the murder.

The ministry said it had requested red notices for 18 people Nov. 15 and for two persons Dec. 21. The Saudi Consul General, who was in the building at the time of the murder and later fled the country, is said to be among those Turkey is seeking.

Given Interpol’s complex procedures, the red notices do not mean that those arrested will remain in detention or be automatically transferred to Turkey. The notices, which represent a fresh headache for Riyadh, will, nevertheless, make it harder for those being sought by Turkey to travel abroad.

Turkey also continues to insist on an international investigation into the Khashoggi murder. The call for a UN inquiry by 36 countries — including all 28 EU members — during the UN Human Rights Council’s meeting in Geneva March 14 was, therefore, welcomed by Ankara.

However, Bandar bin Mohammed al-Aiban, the president of Saudi Arabia’s Human Rights Commission, told the council that attempts to internationalize the Khashoggi affair amounted to interference in the kingdom’s affairs, and rejected this call.

"We have taken those measures required for us to resolve this heinous crime," Aiban said, adding that the case against the accused was continuing in Saudi Arabia and that three hearings had already been held.

Saudi Arabia’s public prosecutor had previously announced that death sentences were being sought against 11 suspects and that another 21 people were being investigated in connection with this crime.

Riyadh has not named the suspects or given details about their cases. Turkish officials remain skeptical about Riyadh’s sincerity in pursuing these cases.

Aiban’s rejection of a UN inquiry into Khashoggi’s murder has also been met with incredulity in Ankara.

"We find it difficult to understand why an official working in the area of human rights would possibly be unsettled by efforts to shed light on all aspects of the Khashoggi murder, which received a global response," Fahrettin Altun, the communications director of President Recep Tayyip Erdogan, said in a March 14 statement.

“We urge Saudi Arabia to tell the world which individuals are currently on trial [and] on what charge(s) in order not to raise any questions about the sincerity of the judicial proceedings in the kingdom in the international community’s mind,” Altun added.

Erdogan’s past remarks show that he believes that Crown Prince Mohammed bin Salman, or MBS, is somehow involved in this murder.

During a joint television interview Feb. 23, he said the names of all the members of the hit-team sent to kill Khashoggi had been established.

“The one who gave the order is obvious,” Erdogan said, referring to reports that some of the accused were close to MBS.

Ankara’s desire to see a UN inquiry into the Khashoggi murder is unlikely to be satisfied, though, given that the United States, Russia and China are likely to veto such an inquiry, albeit for different reasons.

Rather than pinning its hopes on immediate results, Ankara seems to have chosen a policy of attrition in the hope that developments will eventually force the kingdom to reveal who is ultimately guilty for Khashoggi’s killing.

It was Ankara’s persistence in this regard that forced Riyadh to admit — after initial denials — that Khashoggi had been killed in the Saudi Consulate in Istanbul in a “rogue operation” by security officials.

The case has become a matter of prestige for Erdogan, who is always loath to give the impression of climbing down on any topic that he has openly vowed to pursue.

Erdogan is determined to win local elections planned for the end of this month, in order to consolidate his power, and also needs to show the electorate that he has international clout.

His interest in the case, however, is motivated more by a sense of solidarity among Islamists than any commitment to human rights.

Turkey’s own human rights record, which also involves inconclusive cases of extrajudicial killings of journalists and rights activists, undermines claims by Ankara that its pursuit of the Khashoggi case is being driven by its support for human rights or press freedom.

Khashoggi reportedly had ties to the Muslim Brotherhood, a group that Erdogan supports. Saudi Arabia has listed the Brotherhood as a terrorist organization, and Ankara’s support for the group is a source of contention between the two countries.

Ankara is, nevertheless, relying on Western calls for justice for Khashoggi to boost its own demands in this regard and keep the pressure on Riyadh.

Retired Ambassador Oguz Celikkol believes that the pressure being applied to Saudi Arabia is not going to waste, despite the support Riyadh is getting from Washington and other capitals due to the vast economic power it wields with its oil wealth.

“We see that the pressure on Saudi Arabia is increasing and drawing international attention, not just because of the Khashoggi case, but because of Saudi Arabia’s human rights violations generally,” Celikkol wrote in an article for daily Hurriyet.

Riyadh, however, is also playing for time and hoping that the greater interests of the West in its dealings with Saudi Arabia will eventually ensure that the Khashoggi case is put on the back burner.

This expectation is not totally unfounded given the support MBS has received from key governments in the West and East since the Khashoggi murder.

Erdogan’s adviser, Yasin Aktay, who blew the whistle when his close friend Khashoggi disappeared in Istanbul, believes time is on Turkey’s side in this affair.

“Khashoggi’s murderers and their superiors may be relying on time to free them of these accusations and to cover up what they did … but time is also exposing all the details of their crime,” Aktay wrote in the pro-government daily Yeni Safak.

Mehmet Barlas, the principal commentator for the pro-government daily Sabah, cited “sources close to the crown prince,” which he did not name, and quoted them as saying that MBS was not perturbed by Turkey’s stance.

One such source indicated that “what is important for the crown prince is to have America — and President Trump in particular — stand by him in the Khashoggi case, while Russia and China remain on the sidelines as mere onlookers.”

According to another source quoted by Barlas, MBS believes that “Ankara is only pursuing this case in order to squeeze money out of Saudi Arabia.”

Meanwhile, the strictly controlled Saudi press is maintaining its vitriolic campaign against Erdogan and Turkey, which it unleashed after the Khashoggi murder. It has even been using the attack against the mosques in New Zealand to strike out at Erdogan.

Writing in the Saudi daily Okaz, commentator Mohammed al-Saad pointed out that the perpetrator of the attacks in New Zealand had spent time in Turkey.

He went on to ask in a loaded manner what “this person was doing in the new capital of the Muslim Brotherhood.”

Hamoud Abu Taleb, another commentator for Okaz, pointed to Erdogan’s harsh rhetoric after the attack in New Zealand, and accused him of “opportunistically using this tragedy to give the impression that he is the only Muslim leader who cares about Muslim issues.”

The Khashoggi affair is set to remain a source of tension in Turkish-Saudi relations until Ankara decides to tone down its rhetoric or Riyadh decides to come clean over this murder.

Neither scenario appears possible in the foreseeable future, so the hostility between Ankara and Riyadh is set to increase, with negative implications for Turkey’s relations with other Arab regimes.