Unresolved questions linger in the murder of The Washington Post columnist Jamal Khashoggi, but authorities are hoping chilling new footage might provide clues. 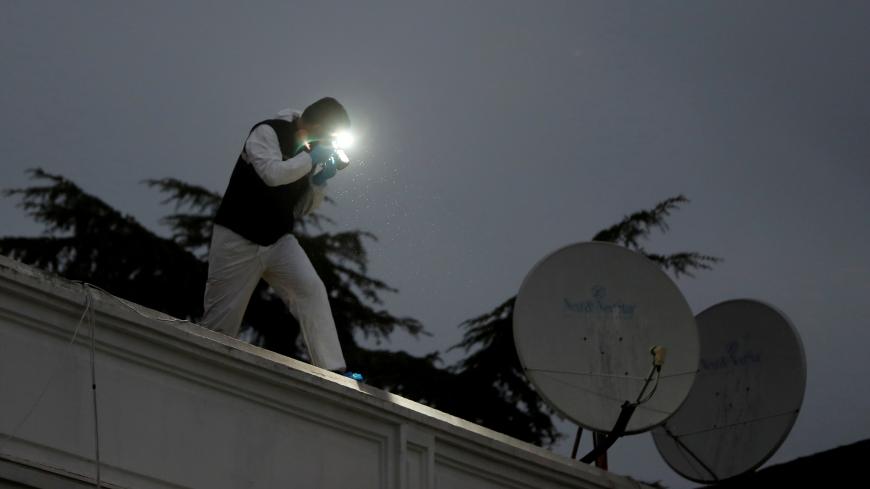 Journalist Jamal Khashoggi’s murder on Oct. 2, 2018, at the Saudi Arabian Consulate in Istanbul has had countless political ramifications on the international level. Although the remains of Khashoggi’s body have yet to be discovered, chilling footage recently broadcast by pro-Turkish government television channel A Haber shows men from the hit team carrying five cases into the residency of Saudi Arabia’s consul general, Mohammad al-Otaibi. Although the footage, which an official in Ankara claims is accurate, confirms what most analysts have concluded early in the Khashoggi case (that Khashoggi was killed and dismembered in the consulate), it does provide new clues about the murder that could help answer unresolved questions.

How will this new footage impact the Turkish government’s investigation as well as Ankara’s relationship with Riyadh?

While Turkish investigators conducted a search of the Saudi Arabian Consulate and the residency shortly after Khashoggi’s killing without finding the body, a focus has returned to the residency because of these revelations. The question arises of whether the Turkish prosecutor’s team will acquire a warrant to search the residence again this year. Nonetheless, if Saudi authorities do not consent to another search, it is doubtful that another search will be possible even if a warrant is given to the team. By using Saudi Arabia’s diplomatic immunity, which prevents diplomats from being subject to a lawsuit or prosecution in the host country’s legal system, it is almost guaranteed that officials in Riyadh will continue refusing to cooperate with their Turkish counterparts.

From a strategic perspective, Turkey’s officials have run circles around their Saudi counterparts throughout the aftermath of Khashoggi’s murder. Ankara’s drip-feeding of evidence behind the killing has successfully enabled this case to continue making headlines without the story being overtaken in the global press by other events. As politicians and civil society members throughout the West continue to express outrage over the Khashoggi saga (albeit with the United States, the United Kingdom and France — Saudi Arabia’s top three arms suppliers — not freezing weapons sales to Riyadh), the pressure will remain on Crown Prince Mohammed bin Salman (often referred to by his initials, MBS), which is precisely what Turkey’s leadership desires. Unquestionably, the launch of an international investigation, which Turkey’s foreign minister is working toward in coordination with other governments, would elevate the seriousness of this murder case to an entirely new level, ultimately putting more pressure on MBS to come clean about what occurred in the Saudi Arabian Consulate.

Turkey has sought to provide the Saudis with opportunities to cooperate, hence the gradual drip-feeding of information has been aimed at increasing the pressure on Riyadh. But there is no reason to expect Saudi cooperation on this file, which will undoubtedly serve to plague the kingdom’s relationship with Ankara throughout 2019 and perhaps beyond. From the Turkish perspective, Khashoggi’s killing was not only a grave crime in and of itself but also an incredibly serious sign of disrespect to Turkey as a country as well as President Recep Tayyip Erdogan, who was a personal friend of the slain journalist.

Turkey, as a rising player in the international arena, views its sovereignty as sacrosanct and is especially sensitive about issues concerning alleged Saudi and Emirati interference in Turkey’s affairs. According to interlocutors in the Gulf who spoke with this author, Turkish authorities bugged Saudi Arabia’s diplomatic mission in Istanbul after the failed 2016 coup plot, which many Turks firmly believe Riyadh and Abu Dhabi were behind. The idea of the Saudis taking advantage of their diplomatic immunity to carry out this murder is extremely offensive to Turkey. To be sure, from a moral standpoint it does not seem that committing this crime in the Saudi Arabia Consulate in Istanbul versus any other diplomatic mission in another country would make a difference, but as a country that plays an important and influential role in the greater Islamic world and as a former imperial power, Turkey found the decision to carry out this brutal act on Turkish soil as particularly outrageous and unacceptable.

What can be expected in Ankara-Riyadh relations for 2019? Unquestionably, the unresolved Khashoggi case — combined with the Saudi/Emirati-led blockade of Qatar plus competition for influence in the Horn of Africa, the Maghreb and the Levant — will fuel greater tension between these two powers that compete for a leadership role in the Sunni Muslim world. A nightmare scenario that MBS fears for 2019 is that Washington will begin shifting toward the Turkey-Qatar alliance as a favored bloc in the Sunni Muslim world in order to counter Iran, rather than continuing to make the Saudi Arabia-United Arab Emirates-Egypt axis its preferred bloc to coordinate with in efforts aimed at pushing back against Tehran’s consolidating influence in the Arab world. Perhaps it is rather difficult to imagine the US administration of Donald Trump supporting such a shift toward an Islamist alliance, yet the recent rapprochement between Washington and Ankara combined with the Trump administration’s warm relationship with Qatar suggest that this might not be impossible.

Doubtless, MBS must consider a future in which his biological father, King Salman bin Abdul-Aziz Al Saud, is deceased, and the crown prince becomes the next ruler of Saudi Arabia when Trump is no longer in the Oval Office. Under such circumstances, the Khashoggi affair will likely continue to serve as a major source of friction in the US-Saudi partnership. Such tension could severely undermine Riyadh’s vital interests at a time when strong American support for the kingdom would be important for MBS amid internal transformations in Saudi Arabia and turmoil throughout the region that threatens the kingdom’s security.