A Saudi national held over suspected ties to the murder of journalist Jamal Khashoggi was released Wednesday after Paris officials determined the arrest was a case of mistaken identity. 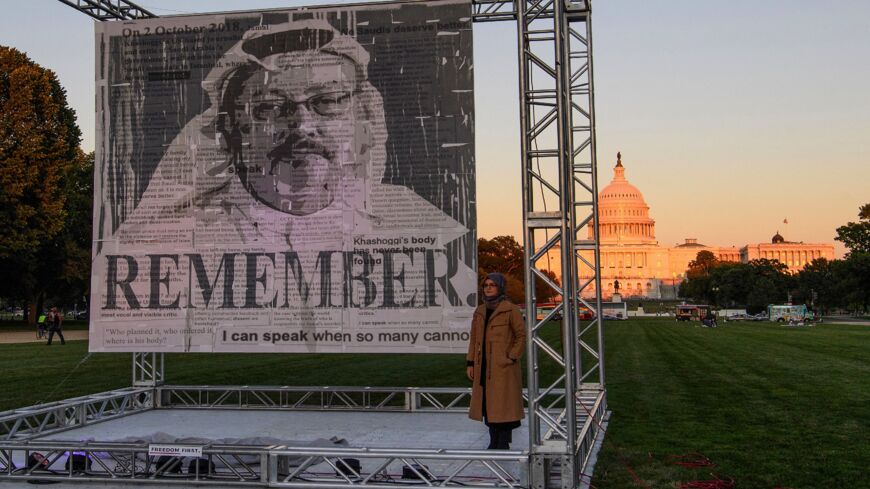 Turkish writer Hatice Cengiz (R), fiancee of Saudi journalist and dissident Jamal Khashoggi, poses next to a portrait of Khashoggi after unveiling it on the National Mall in Washington, DC., on Oct. 1, 2021, during a memorial ceremony marking the third anniversary of his murder at the Saudi Consulate in Istanbul. - NICHOLAS KAMM/AFP via Getty Images

ISTANBUL — A Saudi national detained in France over suspected ties to the murder case of journalist Jamal Khashoggi was released Wednesday after officials determined the arrest to be a case of mistaken identity.

French police arrested a man named Khaled Aedh Al-Otaibi before he attempted to board a Riyadh-bound plane at Charles de Gaulle Airport near Paris Dec. 7.

The man’s name matched that of a former member of the Saudi Royal Guard who, according to a UN-commissioned report, was part of a team that killed Khashoggi at the Saudi Consulate in Istanbul on Oct. 2, 2018.

Following an investigation, Paris prosecutors said Wednesday an arrest warrant issued by Turkey for Al-Otaibi did not apply to the man arrested a day prior.

"In-depth verifications to determine the identity of this person have enabled us to establish that the warrant was not applicable to him," the chief prosecutor in Paris said Dec. 8 in a brief statement.

Shortly after Al-Otaibi’s arrest, the Saudi Embassy in Paris shared a statement on Twitter: “The person who was arrested has nothing to do with the case in question. Therefore, the Kingdom’s embassy expects his immediate release.”

If the suspect’s identity had been confirmed, French prosecutors would have needed to decide whether to extradite the Saudi national to Turkey, which issued an Interpol warrant for the suspect.

The apparent mix-up comes at a sensitive time for both French and Turkish relations with Saudi Arabia as both nations seek to ease recent strains with the kingdom and strengthen ties with its de-facto leader, Mohammed bin Salman (MBS).

This weekend, French President Emmanuel Macron paid Riyadh a visit, becoming the first major Western leader to do since Khashoggi’s murder, though the French leader said he discussed “the question of human rights” with MBS.

Khashoggi was a well-known journalist who was openly critical of the Riyadh government. His body has yet to be found after he was killed and dismembered by a team of Saudi agents at the Saudi Consulate in Istanbul in 2018.

A month after his disappearance, Erdogan said orders to target Khashoggi came from the “highest levels” of the Riyadh government, further straining ties with the kingdom after backing Qatar in a diplomatic crisis between Doha and other Gulf nations, including Saudi Arabia.

A US intelligence assessment report released in February implicated MBS in the murder, a charge denied by Riyadh officials who insist the killing was conducted by rogue operatives.

In response to international pressure, Saudi Arabia launched an investigation into 31 suspects over the murder, eventually sentencing eight people to prison for the murder without publicly naming them in a secretive trial.

"The latest news indicates that yesterday's arrest may have been a case of mistaken identity,” Scott Griffen, deputy director at the International Press Institute, told Al-Monitor. “But the apparently mistaken arrest is a reminder that no one has faced justice for the murder of Jamal Khashoggi, and certainly not through Saudi Arabia's sham trial.”

A Turkish court began a trial in July 2020 against 26 Saudi nationals in absentia over Khashoggi’s murder. In the last hearing in November, the court requested that Turkey’s Justice Ministry contact authorities in Riyadh to determine whether case suspects had already been sentenced in Saudi Arabia to avoid prosecuting them over the same offense.

Media rights advocates have noted the Turkish court has so far rejected two requests by lawyers for Hatice Cengiz, Khashoggi's Turkish fiancee, to have the US report added to the case.

Erol Onderoglu, the Turkey representative for Reporters Without Borders (RSF) and Bianet media freedom rapporteur, said as far as he understood there would be no new witnesses called to the next hearing on Feb. 24, 2022, leaving many questions over the possible outcome of the trial at a time when Ankara seeks to improve ties with Riyadh.

“We are concerned that the Turkish court might have reticence in widening the investigation toward the high-ranking Saudi officials, including [MBS],” Onderoglu told Al-Monitor.

“RSF is also concerned the case will be pushed into the shadows … as it is unpopular now during a process where we know the Turkish government is invested in rebuilding diplomatic ties with Saudi Arabia," he added.