Turkey is pressing on with its campaign to force the kingdom to admit its culpability in the murder of Saudi journalist Jamal Khashoggi. 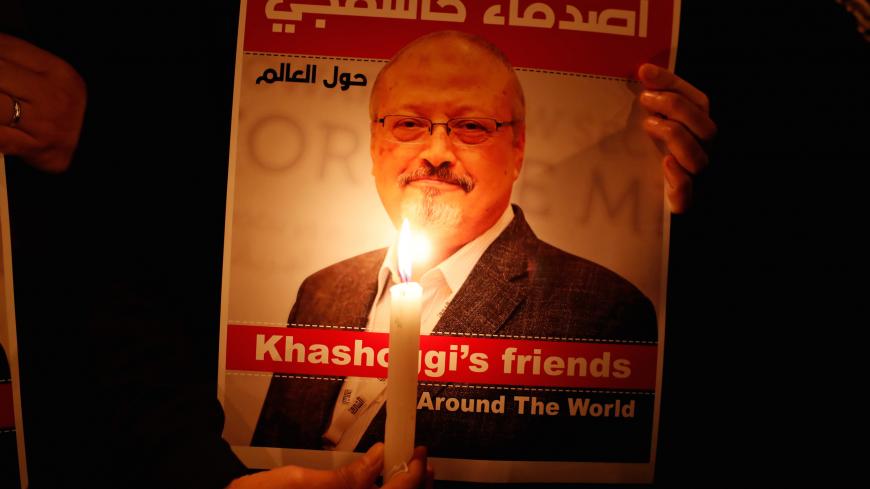 A demonstrator holds a poster with a picture of Saudi journalist Jamal Khashoggi outside the Saudi Arabian Consulate in Istanbul, Turkey Oct. 25, 2018. - REUTERS/Osman Orsal

Saudi journalist Jamal Khashoggi was strangled as soon as he entered his country’s consulate in Istanbul and his body was then dismembered and destroyed, Turkish authorities said. They accused high-level officials of ordering the murder that has unleashed international fury against the kingdom.

The charges came in a rare statement to the press from Istanbul’s chief prosecutor and in remarks by the ruling party’s spokesman late on Wednesday in a clear signal that Turkey is not dropping its pressure campaign on Saudi Arabia in the wake of Khashoggi’s brutal killing in Istanbul Oct. 2.

Khashoggi’s body was cut up and destroyed after his death in a premeditated attack, the prosecutor’s office said in its first official confirmation of some of the details of the grisly murder that anonymous Turkish sources have leaked to the media over the past month. The statement was issued after negotiations with Saudi Arabia’s public prosecutor, who was in Istanbul this week following a pledge to cooperate in the Turkish investigation.

“Despite all of our good intentions, no concrete result was obtained from the meetings,” the prosecutor said, outlining three central unanswered questions: Where are Khashoggi’s remains, what evidence has the Saudi investigation unearthed and who is the purported “local collaborator” that Saudis claim helped dispose of the body?

Turkish officials have complained that Saudi Arabia is failing to fully cooperate, even as the kingdom has succumbed to pressure and reversed its earlier positions to more closely match Turkey’s allegations. Initially, it claimed to know nothing about Khashoggi’s disappearance, then acknowledged he had indeed been killed at its consulate but that his death was accidental. Its next assertion was that rogue security officers were behind the murder, and last week it said evidence indicated Khashoggi’s killing was planned.

The pivots have done little to assuage Turkey, however, as it seeks an admission of culpability by a senior official — possibly as high as Crown Prince Mohammad bin Salman — for the death of Khashoggi, a 59-year-old columnist for the Washington Post and a vocal critic of the crown prince.

“This is not the kind of action that could have occurred without orders from a high level,” Omer Celik, spokesman for the Justice and Development Party (AKP), told reporters. “Where is Khashoggi’s body? Those who did this are in the hands of Saudi officials, and it’s impossible that they have not learned this.”

A former adviser to the Saudi government, Khashoggi moved to the United States upon becoming disillusioned with bin Salman’s rule after he took control of the kingdom in 2017 and began a wide-ranging crackdown on his opponents to consolidate power in the world’s top oil exporter.

Khashoggi vanished after entering the Saudi Consulate to obtain papers to marry his Turkish fiancée, Hatice Cengiz, who waited for him for hours outside the building. She told the BBC this week that she wants the international community to support Turkey in its quest to lay bare what happened to Khashoggi.

His murder on Turkish soil has incensed President Recep Tayyip Erdogan, who has previously clashed with bin Salman over Iran, Syria and Qatar. Earlier this year, bin Salman reportedly said Turkey was part of a “triangle of evil” with Iran and extremist Islamist groups, and Saudi Arabia is joined by the UAE and Egypt in opposition to Turkey’s hosting of Arab dissidents, including members of the Muslim Brotherhood who have sought refuge in Istanbul.

The AKP’s Celik reiterated Erdogan’s demand that the 18 men Saudi Arabia has arrested in connection with the murder be extradited to Turkey for trial. Authorities there have refused to turn over the suspects. “The prosecution should be in Istanbul. … All of the evidence will emerge and the world will have its questions answered. Unless this is done, this process will not disappear from the agenda,” Celik said.

It is down to Erdogan’s sheer will that the Khashoggi matter has not been swept under the rug, Celik said, adding, “He is closed to offers made to him to cover this up.”

Erdogan has been dogged in the quest to investigate the murder, and disclosures from the probe have captured global media attention. Turkey has an “international responsibility” to hold those behind the murder to account, Erdogan has said.

“We are entering the second act of this drama,” said Soner Cagaptay, the director of the Turkish Research Program at the Washington Institute for Near East Policy and the author of “The New Sultan,” a biography of Erdogan. “There is a larger strategic gain if … MBS is not only embarrassed internationally but could also be sanctioned,” he said, referring to the crown prince by his initials.

“Erdogan sees MBS as the weakest link in a triple entente in the Middle East, composed of Saudi Arabia, UAE and Egypt,” Cagaptay told Al-Monitor. “This is a chance to break his isolation. If he can connect MBS to this murder, he weakens him internationally and domestically.”

The Turkish president said on Tuesday he shared new details of the Khashoggi case with Russian President Vladimir Putin, German Chancellor Angela Merkel and French President Emmanuel Macron during their visit to Istanbul for a meeting on Syria’s future over the weekend.

Erdogan spoke by phone on Thursday with US President Donald Trump about bilateral issues and the conflict in Syria, according to Erdogan’s office. The statement did not mention whether the leaders discussed the Khashoggi case.

Bin Salman has enjoyed the support of Trump, who sees the 33-year-old royal as a key player in curbing Iranian influence and resolving the Israeli-Palestinian conflict, as well as a buyer of US weapons and a pliant supplier of oil to global markets. But senators from his own party asked Trump on Wednesday to halt talks to supply Saudi Arabia with US nuclear technology after Khashoggi’s killing, saying it raises concerns about the judgment of Saudi decision-makers.

The United Nations said this week that it wants an international investigation into Khashoggi’s murder to avoid “the appearance of political considerations.”