Turkish prosecutor calls for transfer of Khashoggi trial to Riyadh 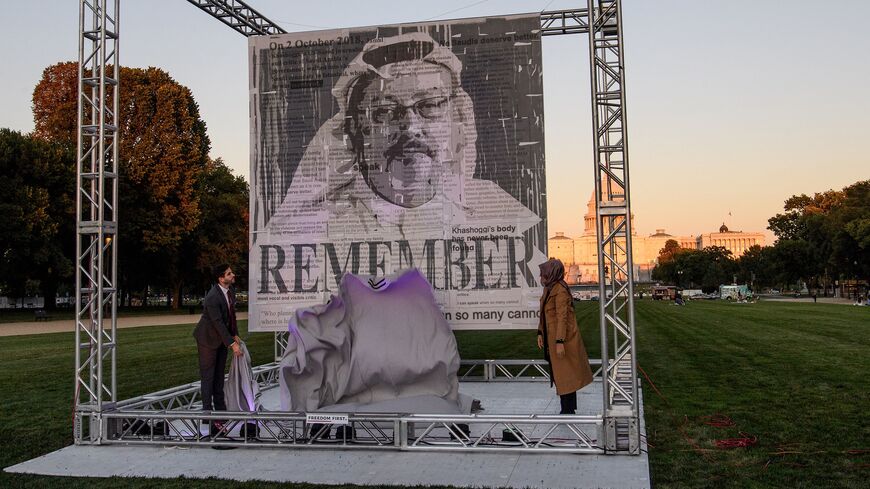 Turkish writer Hatice Cengiz (R), fiancée of Saudi journalist and dissident Jamal Khashoggi, unveils a portrait of Khashoggi on the National Mall in Washington, DC, on Oct. 1, 2021, during a memorial ceremony marking the third anniversary of his murder at the Saudi consulate in Istanbul. - NICHOLAS KAMM/AFP via Getty Images

ISTANBUL — A Turkish prosecutor on Thursday called for the trial of suspects in the killing of dissident journalist Jamal Khashoggi to be halted, in a move widely assumed to be linked to Ankara’s bid to restore ties with Saudi Arabia.

The court was asked to suspend the trial in absentia of 26 Saudis accused of involvement in the 2018 murder of the Washington Post writer at the Saudi consulate in Istanbul.

The prosecution lawyer also requested the case be transferred to the Saudi authorities, who have previously refused to extradite the suspects. The court said it would seek advice from the Turkish Ministry of Justice and set the next hearing for April 7.

The killing of Khashoggi caused worldwide outrage and blackened the reputation of Saudi Arabia’s de facto ruler, Crown Prince Mohammed bin Salman, whom US intelligence said had likely ordered the assassination. The prince, known as MBS, has denied any involvement.

The journalist, a former adviser to the Saudi royal family turned critic of MBS, was last seen entering the consulate on Oct. 2, 2018.

Following his disappearance, pro-government Turkish media released a steady stream of details about the suspects and their movements around Istanbul. Ankara said it had also passed on audio recordings from inside the consulate to the Saudis and other countries that captured the killing.

Turkish President Recep Tayyip Erdogan, writing in the Washington Post a month after the killing, said the order to kill Khashoggi came from “the highest levels of the Saudi government.”

In recent months Ankara has moved to repair ties with the Saudis, as well as other Arab states such as Egypt and the United Arab Emirates — relations that were damaged by Turkish support for the Muslim Brotherhood and the Gulf blockade on Turkey’s ally Qatar.

Following meetings between Turkish Foreign Minister Mevlut Cavusoglu and his Saudi counterpart, Erdogan is due to visit the kingdom next month.

In a Thursday interview with broadcaster A Haber, Cavusoglu said “solid steps” on judicial cooperation with Saudi Arabia were expected “in the coming period.”

The prosecution’s bid to have the Khashoggi case stopped led his fiancée, Hatice Cengiz, to comment on the “dilemma facing humanity.” She tweeted: “Which of the two will we choose? To want to live like a virtuous human being or to build a life by holding material interests above all kinds of values.”

Timothy Ash, an economist for BlueBay Asset Management specializing in Turkey, characterized the prosecutor’s request as a “sign of how eager Erdogan is to rebuild relations with Saudi Arabia.”

In a note to investors, he added that it “sets the stage” for MBS to provide billions in financing to “bankroll Erdogan’s re-election.”

Erol Onderoglu, the Turkey representative of Reporters Without Borders, said for Ankara to “give into the demands of the Saudi authorities” would make a “mockery of justice.”

A Saudi court jailed eight people for between seven and 20 years over the killing in September 2020. Critics said the closed trial, during which none of the defendants were identified, lacked transparency and did not meet international standards.

A report by United Nations special rapporteur Agnes Callamard in 2019 found that Khashoggi’s death “constituted an extrajudicial killing for which the state of the Kingdom of Saudi Arabia is responsible.”

She described the Turkish prosecutor’s request on Thursday as “spineless” and an ongoing “travesty of justice.”

Following the Saudi trial, the Turkish court asked the Justice Ministry to request details of those convicted. According to the Turkish prosecutor, the Saudi authorities responded by asking for the case be transferred and for Interpol red notices against the defendants to be removed.

Riyadh also pledged to evaluate the accusations against the 26 defendants if the case was transferred, the prosecutor added. They face charges of murder, instigating murder and interfering with evidence.

Arguing for the request to be accepted, the prosecutor said that as the defendants were foreign nationals, the arrest warrants and red notices could not be executed and their statements could not be taken, leaving the Turkish case in limbo.

Onderoglu said such an outcome would be “a terrible development for those who expect justice for an intellectual who was eliminated in a diplomatic building.”

Turkey’s changing priorities are shown by he Turkish court’s earlier refusal to accept the US intelligence report accusing MBS of approving the operation to kill or capture Khashoggi, according to Onderoglu.

“It seems the Jamal Khashoggi case is a victim of global reluctance and diplomatic rapprochement,” he said.