Turkish President Recep Tayyip Erdogan says he's gotten shocked reactions to an audio tape of the Saudi journalist’s final moments as he presses world leaders to hold the kingdom accountable for its alleged role in the killing. 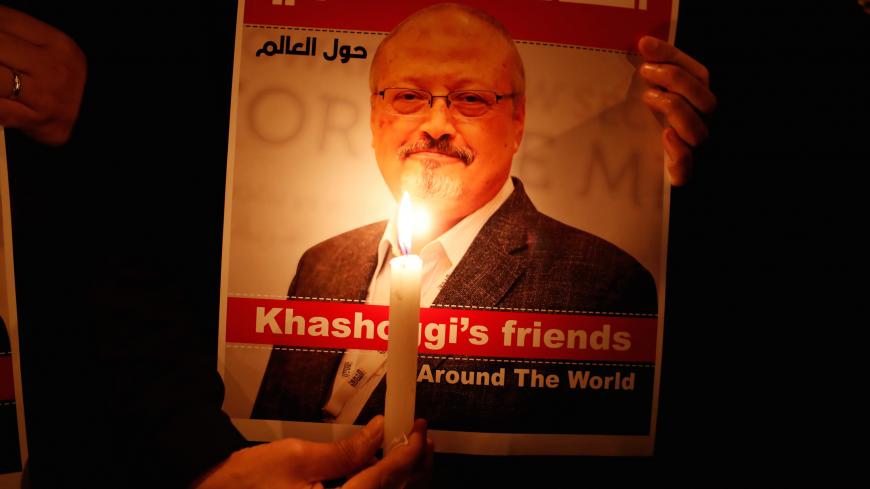 A demonstrator holds a poster with a picture of Saudi journalist Jamal Khashoggi outside the Saudi Consulate in Istanbul, Turkey, Oct. 25, 2018. - REUTERS/Osman Orsal

ISTANBUL — A recording made during the killing of Saudi journalist Jamal Khashoggi is so “atrocious” that it shocked a Saudi intelligence officer who heard it, Turkish President Recep Tayyip Erdogan said, continuing his weeks-long campaign to force the Saudi government to accept culpability for the killing.

Erdogan also told journalists traveling with him on his plane that he had told the leaders of the United States, Germany and France during a trip to France to mark the 100th anniversary of the end of World War One that the plot was carried out on “high-level” orders from Riyadh.

Khashoggi, a columnist with the Washington Post, left Saudi Arabia for the United States after Crown Prince Mohammed bin Salman took power last year and launched a crackdown on his opponents. A vocal critic of the 33-year-old prince, Khashoggi visited the Saudi Consulate in Istanbul on Oct. 2, just 11 days before his 60th birthday, to obtain paperwork in order to marry his Turkish fiancée and was never seen again. His remains are still missing.

Erdogan has said Turkey has a moral obligation to expose those responsible and bring the killers to justice. His efforts have already compelled the kingdom to acknowledge that Khashoggi was killed in a preplanned attack and arrest 18 suspects, including 15 people Ankara said traveled to Turkey to carry out the assassination.

“We have had everyone who wanted this recording listen to it; our intelligence agency has hidden nothing. The recording is truly atrocious. In fact, a Saudi intelligence official who listened to the recording was so shocked, he said, ‘He probably took heroin. Only someone who has taken heroin could do this,’” Erdogan was quoted by newspapers on Tuesday as saying.

Erdogan said he and US President Donald Trump, the crown prince’s main backer, had included German Chancellor Angela Merkel and French President Emmanuel Macron in their discussion of Khashoggi’s case during a Saturday dinner in Paris.

“I explained our stance on the Khashoggi killing [that] this murder was premeditated, and it’s clear that the orders came from high levels in Saudi Arabia. … I told Mr. Trump there is no need to look for the murderers; the murderers are among these 18 people” who are in custody in Saudi Arabia, said Erdogan. He had previously said the men should be extradited to Turkey to face trial here.

In response, Le Drian’s Turkish counterpart, Mevlut Cavusolgu, said France may be endeavoring to bury the case, insisting that French intelligence officials were given the audio upon their request on Oct. 24.

“It is extremely impudent for him to accuse our president of playing a game," Cavugoslu told the state Anadolu Agency. “I would not be surprised if they denied the Khashoggi murder, which Saudi Arabia has even accepted. … Are they trying to cover up this murder?”

The case has deeply embarrassed Prince Mohammed, who is often referred to by his initials MBS. He has faced international revulsion as Turkish investigators continue to leak details of the gruesome killing to the media.

Relations between Erdogan and the prince were icy before Khashoggi’s death over a number of regional disputes, including a Saudi-led blockade of Turkey’s close ally Qatar over its alleged support for Islamic extremists and its friendly ties with Iran.

“Erdogan has achieved almost all of his goals in the Khashoggi incident. He has gotten the Saudis to admit that it was a premeditated murder and he has isolated MBS by targeting him directly and indirectly,” said Soner Cagaptay, the director of the Turkish Research Program at the Washington Institute for Near East Policy and the author of “The New Sultan,” a biography of Erdogan.

“For Erdogan, Muslim unity trumps other issues, and I can see him letting MBS off the hook — though not letting him smell of roses — if Saudi Arabia agrees to end Qatar’s isolation,” he told Al-Monitor.

The New York Times reported that the recording, which was shared with CIA Director Gina Haspel last month, includes the voice of one of the killers saying on the phone in Arabic to “tell your boss” the deed was done, a reference that US intelligence officials believe was to MBS. It is not clear how Turkey obtained a recording of Khashoggi’s final moments within the consulate.

But US National Security Adviser John Bolton appeared to contradict that assessment on Tuesday, saying the crown prince was not implicated in the audio tape. Trump is still waiting for the truth to emerge, he said.

On Tuesday, the pro-government Sabah newspaper published X-ray photographs it said were taken during a security check of the luggage carried by the Saudi “hit squad” onto airplanes after the attack. The bags contained electroshock devices, a signal jammer, syringes, staple guns, pliers and two-way radios, it said, adding they were allowed to board their flights with the tools under the rules of diplomatic immunity.

In recent days, the Turkish press has published conflicting reports about the search for Khashoggi’s remains. Sabah said police found evidence of hydrofluoric acid, a highly corrosive material, in the plumbing of the Saudi consul general’s residence, which is within walking distance of the consulate, and believe that Khashoggi’s body was liquefied and flushed down the drain. However, Yeni Safak, which is also close to the government, cited police as saying they believe his remains are still at the residence, even though forensics teams searched the premises last month.

Without a body, Khashoggi’s loved ones have been unable to give him a proper Muslim burial. On Friday, his supporters will gather at Istanbul’s Fatih Mosque to hold funeral prayers, said Turan Kislakci, a friend of Khashoggi’s who leads the Turkish-Arab Media Association.

“We have come to accept that Jamal is dead and that his body has been destroyed, and we will perform our prayers for his soul. But we also hope this service will be a call to everyone that the world must do something in the face of this barbaric act,” Kislakci told Al-Monitor.