Turkish researcher Hatice Cengiz has released a memoir of her relationship with the murdered Saudi journalist and says she hopes it will keep up public pressure to punish those responsible for his death. 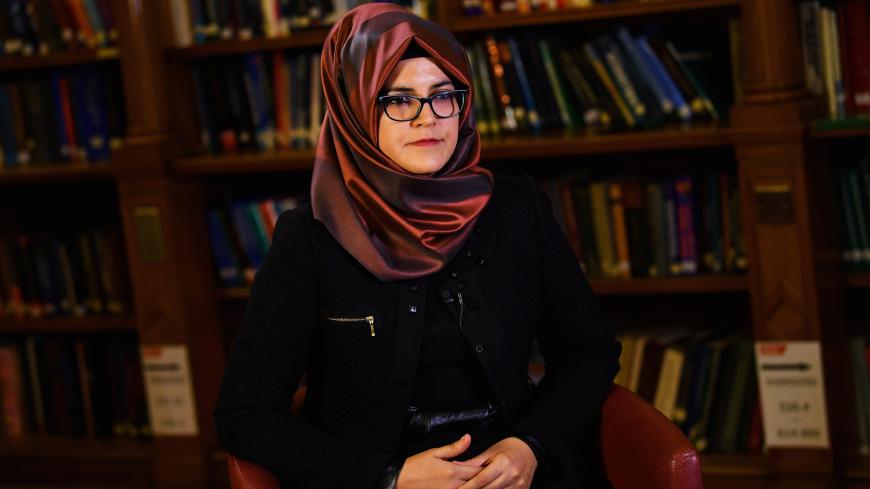 ISTANBUL — The fiancée of slain Saudi journalist Jamal Khashoggi remains hopeful investigations into his murder will bring his killers to justice. But Hatice Cengiz will have to keep waiting after the US administration refused to issue its findings last week on his death at the Saudi Consulate in Istanbul.

Cengiz, a 37-year-old Turkish doctoral student, was one of the last people to see Khashoggi alive on Oct. 2, 2018, when he entered the consulate to obtain paperwork for their wedding. She recounts that fateful day in a new book, “Jamal Khashoggi: Behind the Murder of the Century,” which is based on her contemporaneous diary and interviews she gave two Turkish journalists.

“Punishing those who carried out Jamal’s murder and prosecuting those who are responsible will relieve some of the heartache,” Cengiz said at the memoir’s launch last week. “The main reason I’ve sought to keep this issue on the public’s agenda is because of the importance of giving his loved ones a grave for his body at which they can pray.”

Khashoggi’s remains were never recovered, and Turkey has said it believes Saudi officials dismembered his body before disposing of it. Turkish leaks of the grisly details of the killing helped spark an international backlash against Saudi Arabia over the murder of the Washington Post columnist, an outspoken critic of Crown Prince Mohammed bin Salman.

Yet President Donald Trump has dragged his feet on implicating the crown prince, his family’s close ally, and on Feb. 8 the White House failed to report its findings in a congressionally mandated investigation into whether he was behind the grisly killing. If found complicit, Prince Mohammad could face punitive action under the Magnitsky Act, US human rights legislation that imposes sanctions or visa bans on individuals who have committed human rights abuses.

Both Republican and Democratic senators accused the White House of violating the law and “moral bankruptcy” for failing to deliver its findings. Adam Schiff, the Democrat who runs a congressional intelligence committee, said the president’s refusal to issue the report on Khashoggi's death adds impetus to Congress’ efforts to scrutinize Trump’s ties with the Saudi government.

On Tuesday, Secretary of State Mike Pompeo denied his administration was trying to whitewash Khashoggi’s death and said that it would hold those behind it to account. “America is not covering up for a murder,” he said during a visit to Hungary.

Evidence continues to mount that the crown prince wanted to silence Khashoggi, including US intelligence intercepts of a 2017 conversation with an aide in which the 33-year-old prince threatened to use “a bullet” on Khashoggi if he did not end his criticism of the Saudi leadership.

Khashoggi, 59, died in a “brutal, premeditated killing, planned and perpetrated by officials of the state of Saudi Arabia,” said Agnes Callamard, a UN human rights investigator after a Feb. 7 visit to Turkey, where authorities shared with her an audio recording of Khashoggi’s death. She also accused Saudi Arabia of undermining Turkey’s investigation and will issue a final report in June.

“We all know the UN’s power to sanction. My hope is its report will accelerate the process and will have a lasting impact,” Cengiz said.

The kingdom’s Foreign Minister Adel al-Jubeir said on Sunday that Saudi Arabia does not need a UN inquiry and its own legal system is “competent” enough to handle the investigation. He also denied the crown prince was involved in the killing, which he described to CBS News as a mistake made by rogue Saudi officials. Riyadh has repeatedly changed its story about the circumstances surrounding Khashoggi’s death. It has indicted 11 suspects, but has largely kept the legal proceedings secret.

For its part, Turkey continues its own inquiry into what it believes was an elaborately planned and executed attack on Khashoggi. On Sunday, President Recep Tayyip Erdogan expressed incredulity over Trump’s refusal to take meaningful action against Saudi Arabia.

At the news conference, Cengiz thanked Erdogan for his vigorous efforts to expose Saudi Arabia’s role in her partner’s death. She spoke before the White House missed the deadline, saying she would meet Trump, who had invited her to the White House, during a planned trip to the United States next month “if he considers closely following this issue or exhibits a new approach.”

Newly elected members of the US Congress, many of whom rode a wave of anti-Trump sentiment to election in November, offered her more cause for optimism with signs they may pressure Trump in the case, she said.

In a bizarre twist, Jeff Bezos, the world’s richest man, hinted last week that Saudi Arabia may have had a hand in a leak of his private messages in a tabloid sex scandal because of its outrage over the coverage of the killing by the Washington Post, which Bezos owns.

Some of the sensational coverage of Khashoggi’s killing appeared to distress Cengiz, who fought back tears as she spoke to reporters. “What you count as news is for me a tragedy,” she said. The book will show readers “the Jamal Khashoggi I knew, the many sides of him that the public did not know.”

The memoir, whose English edition is forthcoming, does not reveal new evidence in the investigation but is a personal account of the couple’s relationship. It describes the warmth Cengiz felt holding Khashoggi’s hand for the first time and the excitement of picking out furniture for their new home. Cengiz published their final exchange of text messages in the days before Khashoggi vanished in the Saudi Consulate. “I love you more than ever,” he wrote to his fiancée.