The Turkish president discussed the Saudi journalist’s case with world leaders in Paris while Jamal Khashoggi’s friends gathered in Istanbul to honor his memory and demand justice. 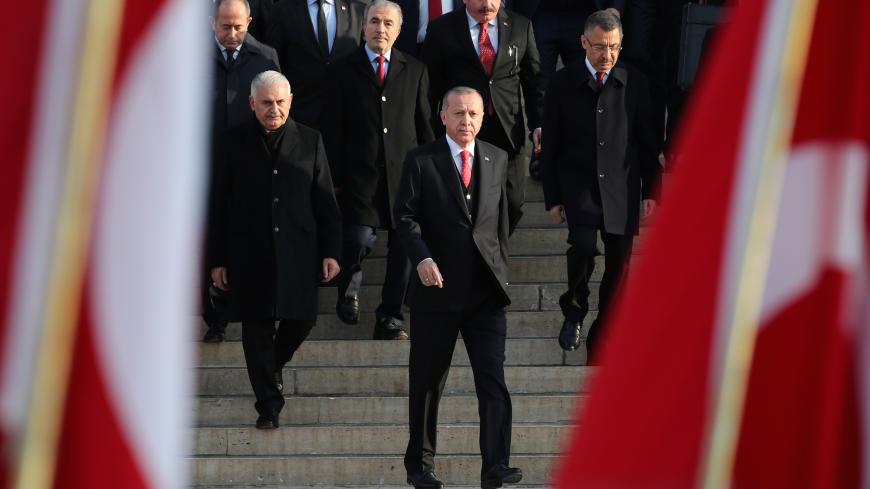 ISTANBUL — Turkey has shared an audio recording of the final moments of Saudi journalist Jamal Khashoggi’s life with its Western allies, President Recep Tayyip Erdogan said, as he continues to pile pressure on Riyadh to come clean about its suspected role in the killing at its Istanbul consulate.

Khashoggi, a columnist with the Washington Post who wrote critically about Saudi Crown Prince Mohammad bin Salman, vanished after entering the Saudi Consulate on Oct. 2. Initially, the kingdom denied it knew of his whereabouts, but repeatedly changed its story as mounting evidence emerged and has since acknowledged he was killed at its mission in a premediated attack.

Saudi Arabia’s pivots were largely forced by Erdogan’s public pursuit of the case. Outraged by a brazen attack carried out in Turkey, he has refused to “turn a blind eye” and has argued that his government has an “international responsibility” to shed light on the murder.

Erdogan over the weekend confirmed for the first time the rumors that Turkish authorities possessed a recording of Khashoggi’s death and said it had been shared with officials from the United States, Saudi Arabia, France, Britain and Germany. It was not clear how Turkey obtained the audio.

Erdogan also said the killers were “definitely” among the 18 people that Saudi officials have detained in connection with the case, including a 15-man “hit squad” Turkey said traveled to Istanbul just before Khashoggi’s death. “The Saudi government can expose who the murderer or murderers are by making these 15 people talk,” Erdogan told reporters before departing for France to attend ceremonies for the centennial of Armistice Day.

In Paris, Erdogan met US President Donald Trump over dinner on Saturday and the two men reportedly discussed Khashoggi’s killing. In a separate meeting, Trump agreed with his French counterpart, Emmanuel Macron, that Saudi Arabia must offer clarity on Khashoggi’s death, though they said the matter should not be allowed to destabilize the region.

Canada said on Monday its intelligence officers have heard the recordings. However, French Foreign Minister Jean-Yves Le Drian appeared to dispute Erdogan’s claim he had shared the tape with the Elysee, telling France 2 his government does not have the recording. Asked if he meant Erdogan was lying, Le Drian said, “It means that he has a political game to play in these circumstances.”

Frustrated by what it says is a lack of cooperation from Saudi Arabia in the investigation, Turkey has leaked to the media a steady stream of grisly details from Khashoggi’s killing to pressure senior officials in the kingdom — possibly even the crown prince himself — to accept culpability. Erdogan has said he knows the order to kill Khashoggi came from the highest levels of the Saudi government.

“I'm suffocating … Take this bag off my head, I'm claustrophobic,” were Khashoggi’s final words before he was asphyxiated with a plastic bag, a senior editor at a newspaper close to the Turkish government told Al Jazeera. A Turkish official did not immediately confirm the report.

The murder took about seven minutes and the men who killed him then took 15 minutes to dismember Khashoggi’s body, Daily Sabah editor Nazif Karaman told the Qatar-based channel.

Such shocking revelations have whipped up international fury against Saudi Arabia, but few governments have taken concrete measures to punish the kingdom. The United States, Riyadh’s main backer, appears reluctant to sanction its close ally on whom it relies to buy its weapons, supply the world with oil and for help in curbing arch foe Iran’s influence. Trump said he would form a “stronger opinion” on Khashoggi’s killing this week.

In a sign of Saudi’s weight in global oil markets, crude prices rose sharply on Monday after the kingdom said it would supply a half-million fewer barrels next month because of what it sees as an excess of supply. This came despite a Saudi pledge to Trump to increase oil production and offset a decline in Iranian exports due to US sanctions.

Relations between Turkey and Saudi Arabia were tense well before Khashoggi’s murder, with Erdogan and Prince Mohammad at odds over policies in Iran, Syria and Qatar. Saudi Arabia also resents Turkey’s support for Muslim Brotherhood figures from various Arab nations, many of whom have found refuge in Istanbul.

Khashoggi was a former government adviser and newspaper editor who had fled Saudi Arabia after the crown prince took power last year and launched a crackdown on his opponents. The columnist had visited the Saudi Consulate to obtain paperwork in order to marry his Turkish fiancée, Hatice Cengiz, who waited outside the facility for hours for him to emerge. Khashoggi was just shy of his 60th birthday.

Cengiz, 38, wept openly at a memorial for Khashoggi on Sunday, when a few hundred people gathered to remember him and demand justice, according to news reports.

Also on Sunday, protesters met outside the Saudi Consulate to condemn the war in Yemen, where Saudi Arabia has led a coalition fighting Houthi rebels since 2015. The fallout over Khashoggi’s death has focused attention on Saudi’s role in the war in which a many as 80,000 people have been killed and a humanitarian crisis threatens to unleash a catastrophic famine.