The potential for a full-blown crisis between Turkey and Saudi Arabia remains in the cards. 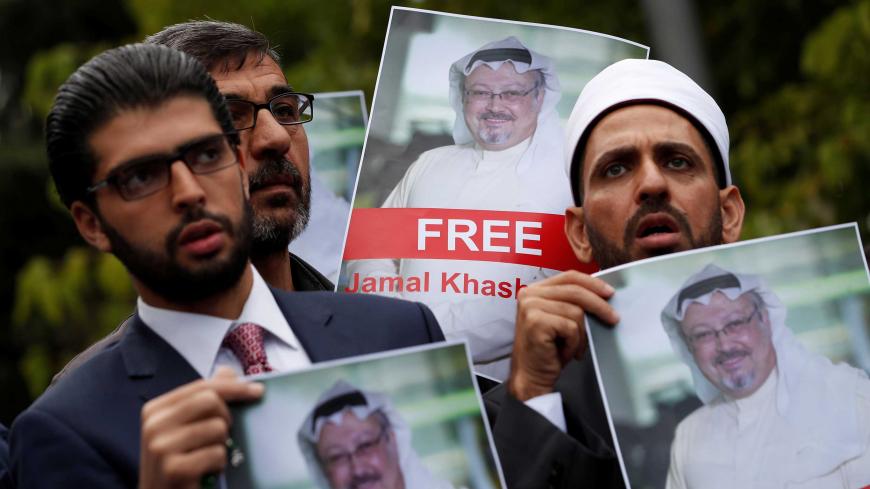 Human rights activists and friends of Saudi journalist Jamal Khashoggi hold pictures of him during a protest outside the Saudi Consulate in Istanbul, Turkey, Oct. 8, 2018. - REUTERS/Murad Sezer

The disappearance of Saudi journalist Jamal Khashoggi, who was last seen entering the Saudi Arabian consulate in Istanbul last week to obtain documents necessary to marry his Turkish fiance, is a new headache for President Recep Tayyip Erdogan.

The affair — which involved gruesome allegations of murder by Saudi agents — has the potential to cause a serious rift between Turkey and the principal Gulf state at a delicate moment for Ankara with regards to developments in the Middle East.

The Turkish-Saudi relationship is one of superficial cordiality, but it's otherwise known to be loveless at the best of times because of differences over a host of issues related to developments in the region.

The Saudi regime does not command much respect among Erdogan’s Islamist support base either, especially since Crown Prince Mohammed bin Salman effectively took control of power and started underlining the importance of moderate Islam.

The term “moderate Islam” is seen by Turkish Islamists as a Western invention designed to control governments in predominantly Islamic countries.

The Saudi regime is also widely accused in Turkey of playing a duplicitous role in the Middle East that serves US and Israeli interests more than those of the Islamic world.

Turkey’s support for the Muslim Brotherhood and its offshoots like Hamas — which are considered by Saudi Arabia as radical organizations that pose an existential threat — is a principal issue that Ankara and Riyadh are at odds over.

The backing that Riyadh gave to the Egyptian military in 2013 when it toppled the country’s elected President Mohammed Morsi and his Islamic Brotherhood-led government still rankles Ankara.

Turkey’s support for Qatar, in defiance of Saudi-led efforts to isolate and punish the Gulf state for its support of the Muslim Brotherhood and its good ties with Iran, is another contentious issue between Ankara and Riyadh.

Despite these clouds over the relationship, diplomatic pragmatism has forced the sides to maintain a veneer of friendly ties. This, however, may be hard to preserve now as facts pertaining to Khashoggi’s disappearance begin to emerge.

The fact that Khashoggi had good personal relationships with prominent names from Erdogan’s Justice and Development Party (AKP) and strong links to the pro-government media in Turkey will also pressurize Erdogan into acting firmly against Riyadh.

In his initial statement on the affair over the weekend, Erdogan also characterized Khashoggi as “a friend of long standing.” He will, therefore, want to avoid any impression that he is prepared to whitewash an affair involving the disappearance of a respected international journalist who also happens to be close to prominent names within his own party.

Yasin Aktay, a columnist for the Islamist daily Yeni Safak and personal adviser to Erdogan — Aktay blew the whistle on Khashoggi’s disappearance — is one such name. Aktay was contacted by Hatice Cengiz, Khashoggi’s Turkish fiance, as she was told to do by Khashoggi if he should not reemerge from the consulate after entering it on Oct 2.

Meanwhile, well-known names from the Middle East such as Tawakkol Abdel-Salam Karman, the Yemeni journalist, politician and human rights activist who was awarded the 2011 Nobel Peace Prize, are among those keeping vigil outside the Saudi Consulate in Istanbul and calling for Riyadh to be held accountable.

Hakan Albayrak writes for the newspaper Karar, whose audience is the more liberal wing of AKP supporters. He argues that Turkey can’t afford to take this affair lightly.

“If the strongest reaction is not shown in response to what was done to Jamal Khashoggi in Turkey, then Saudi Arabia and other states will be encouraged to carry out these operations in Turkey,” Albayrak wrote.

Yahya Bostan, from the pro-government Daily Sabah, also reflected the groundswell of anger against Saudi Arabia.

“If Saudi Arabia had a journalist and dissident murdered at a diplomatic mission in a foreign country, it deserves to be designated a rogue state more than any other nation in the world,” Bostan wrote.

“If Jamal Khashoggi has indeed been killed at the Saudi Consulate in Istanbul, there will be legal, political and diplomatic consequences,” he added.

Aktay is also among those demanding strong action against Riyadh. “When we ask [consulate officials], they say [Khashoggi] left [the consulate] even though we have established that he did not,” Aktay told the daily Hurriyet in an interview.

“This suggests they do not take Turkey seriously. … This is a matter of honor for Turkey now. Being overly sensitive about our ties with Saudi Arabia is a luxury at this stage” he added.

Erdogan told reporters on Oct. 8, during a press conference in Budapest with Hungarian Prime Minister Victor Orban, that it was “Turkey’s political and humane duty” to follow this affair closely with all the means available to it.

“Consulate officials cannot exonerate themselves by simply saying [Khashoggi] left the premises. If he did, then they have to prove this with visual material,” Erdogan said.

According to various press accounts based on information from unnamed Turkish officials, the operation against Khashoggi was carried out by Saudi agents numbering somewhere between 12 and 15, who arrived hastily in Istanbul on two private jets just prior to Khashoggi’s fateful appointment at the consulate and left equally as hastily shortly after it.

This group is suspected of having carried out the operation against Khashoggi.

Turan Kislakci, who heads the Turkish-Arab Media Association, provided a chilling account for reporters on what happened to Khashoggi, which he said was based on information provided by security officials.

“After he entered the consulate, he was anesthetized and [then] his body was cut into 15 pieces and distributed among 15 people,” Kislakci told reporters. This claim has not been officially corroborated yet.

The Saudi consulate denies these allegations and has maintained over its Twitter account that Khashoggi left the consulate after completing his business there.

In an interview with Bloomberg on Oct. 5, Prince Mohammed also denied the allegations against his country and said they would allow the Turkish government to search the consulate. “We have nothing to hide,” he said.

Ankara has applied to do so, but many commentators believe the permission by the Saudi side is farcical since there has been plenty of time to rid the premises of evidence. It is not clear either if the Saudi permission will cover a detailed search by police experts for forensic evidence.

Ankara is clearly angry that the Saudi regime selected Turkey to carry out an operation such as this, fully aware that this was bound to leave Turkey in a difficult position domestically and internationally.

Many also question how Saudi officials believed they would get away with this operation without being noticed. They indicate that this either reflects a lack of intelligence or a lack of respect for Turkey.

Nagehan Alci, a pro-government columnist for HaberTurk, wrote that Prince Mohammed is known for brutally arresting and destroying his opponents. She speculated in her column as to why Salman had opted to kill Khashoggi in this way, even though it was clear that this would anger not just Turkey but also the United States.

“This was done to spread fear among his enemies by showing them that he will annihilate his opponents regardless of whether they live in the United States or write for the Western media,” Alci argued, referring to the fact that Khashoggi was living in self-exile in America and wrote a column for The Washington Post.

“Saudi Arabia means oil for the world. With the self-confidence that this gives, and relying on the attraction of the dividends that Aramco shares will secure, [Prince Mohammed] must have thought that Khashoggi’s death would not give him much of a headache,” Alci reasoned.

If that is the case, it may turn out to be a gross mistake on the part of Prince Mohammed because Ankara has been left in a situation that it can’t afford to take lightly.

Diplomatic observers expect Turkey to recall its ambassador in Riyadh and expel the Saudi Consul General in Istanbul in the coming days, depending on how this affair pans out. The potential for this to turn into a full-blown crisis between the two countries also remains on the cards.

Meanwhile, Khashoggi's Turkish friends seem determined to see that this matter is not swept under the carpet for the sake of diplomatic expediency.