President Recep Tayyip Erdogan wants those arrested in Saudi Arabia over the murder of prominent Saudi journalist Jamal Khashoggi to be tried in Turkey. 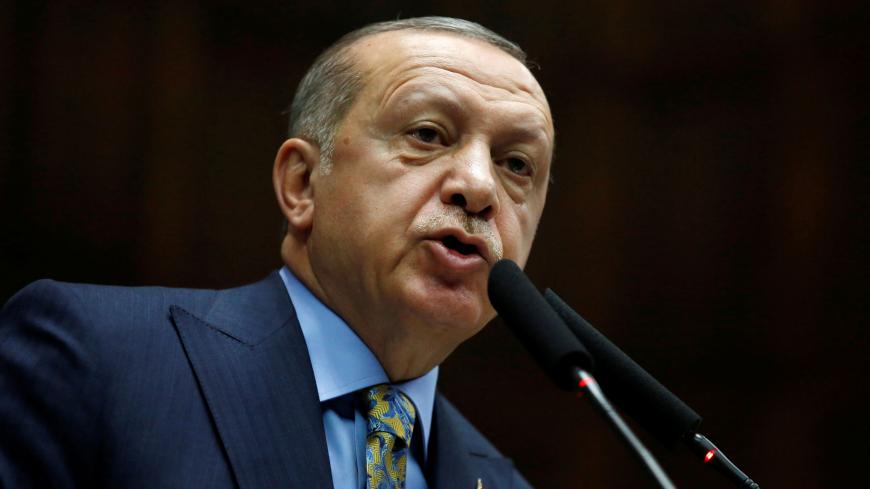 Turkish President Recep Tayyip Erdogan addresses members of parliament during an AKP meeting in which he gave detailed information about the killing of journalist Jamal Khashoggi, at the Turkish parliament in Ankara, Turkey, Oct. 23, 2018. - REUTERS/Tumay Berkin

Turkey’s relationship with Saudi Arabia may be a loveless one because of the rivalry between the two regional powers for influence in the Middle East. Nevertheless, the relationship has been a cordial one for pragmatic reasons, in which the sides have always sought to contain any crisis between them.

This is undoubtedly why Ankara is treading relatively cautiously in its approach to the now confirmed murder of prominent Saudi journalist Jamal Khashoggi inside the Saudi Consulate in Istanbul on Oct. 2.

It is generally believed that the Turkish side has been holding back officially to give Saudi Arabia’s King Salman bin Abdul-Aziz Al Saud time to work out a credible formula for sorting out this problem. Ankara is seeking a formula that does not harm bilateral ties but that also assuages Turkish anger over the selection of Turkey for carrying out this crime.

More than three weeks have elapsed since the murder of Khashoggi. Nevertheless, Ankara has taken its time to officially reveal what facts it has already established.

Still, Ankara chose to leak information to domestic and foreign media about the case to indicate that it will not let this affair be swept under the carpet. These leaks were undoubtedly also aimed at forcing Riyadh to come clean over the murder.

At any rate, the killing of Khashoggi has become too much of an international affair for Ankara to engage in a blatant cover-up. The handling of this case has also become a matter of personal prestige for President Recep Tayyip Erdogan, who has characterized Khashoggi as “a close friend of long standing.”

Khashoggi was also known to have close friends within Erdogan’s inner circle and the ruling Justice and Development Party. Yasin Aktay, an adviser to Erdogan, was the whistleblower on Khashoggi’s disappearance.

The detailed information that President Recep Tayyip Erdogan provided on Oct. 23 during an address to his parliamentary group in Ankara was the first time that Turkey has officially revealed what it knows about the case so far. It also shows that the investigation is being coordinated by the presidency.

Erdogan’s revelations did not contain much that was unknown, of course. Most of what he said is public knowledge because of the large number of leaks by official sources, which began immediately after Khashoggi’s disappearance.

Nevertheless, Ankara expects the information Erdogan made public to result in international action against Riyadh to force it to investigate this affair in a credible manner and to bring those responsible to justice.

King Salman’s call to Erdogan Oct. 14 to discuss the affair, on the other hand, pointed to a desire on Riyadh’s part not to destabilize ties with Ankara at this point in time.

According to the official Saudi Press Agency (SPA), Salman thanked Erdogan for welcoming the kingdom's proposal to form a joint working group to discuss the disappearance of Khashoggi.

“The Custodian of the Two Holy Mosques stressed the keenness of the kingdom on its relations with Turkey, as much as the brotherly Republic of Turkey is keen on that, and that no one will undermine the strength of this relationship,” the SPA reported.

Many in Ankara took Salman's remarks with a pinch of salt.

“This is probably the warmest statement the kingdom has made on Turkish-Saudi relations in recent years,” retired Ambassador Ali Tuygan wrote in an article for his Diplomatic Opinion blog. “The truth is [that] Saudi Arabia has traditionally looked at Turkey as a regional rival,” he added.

“Despite the warm statement on the Salman-Erdogan phone call, the Saudis will have a long-lasting grudge against the Turkish government for its handling of Jamal Khashoggi’s murder,” Tuygan argued.

“This latest statement’s only objective is to secure Turkey’s cooperation in getting Riyadh out of the corner it has put itself into,” he wrote.

Erdogan’s special adviser Ilnur Cevik stirred the cauldron when he argued that Turkey was providing space for Salman to act. “By not scratching the surface of this matter too much, [Turkey] is showing its goodwill and helping King Salman,” Cevik argued in his column in the pro-government news portal Yeni Birlik.

Contrary to Cevik’s view, Turkey is, in fact, doing more than just “scratching the surface of this matter.” Aware of the wide coverage this case is receiving internationally, Ankara is conducting a thorough investigation using advanced forensic methods to gather evidence.

Meanwhile, no government denials or rebuttals have been issued about the information leaked so far to the media by unnamed official sources regarding this case. The facts revealed by Erdogan also confirm that much of what was leaked was factual to a great extent.

The problem for Ankara is that Riyadh’s shifting narrative regarding Khashoggi's killing does fully tally with the information provided by Erdogan.

There is the risk for Ankara, therefore, that if the present Saudi narrative — which contradicts the Turkish account on crucial points — gains traction, this will leave Turkey in a bad light. This possibility is also forcing Ankara’s hand to solve the Khashoggi murder case based on concrete evidence.

Notwithstanding that, some analysts believe Ankara will go along with the Saudi narrative regarding “rogue officials” who went beyond their brief and killed Khashoggi, which is not what the government had intended.

Nevertheless, Erdogan has made it clear that Ankara is not willing to let this affair be covered up with unconvincing narratives from Riyadh that are not based on any evidence.

Ankara also wants the ranking Saudi officials implicated in the killing of Khashoggi to account for their actions and not be simply punished by losing their jobs.

“Letting some security officials take the blame will not satisfy us or the international community,” Erdogan said in his address to his parliamentary group.

Erdogan also called on Salman and the Saudi administration to allow the 18 people reportedly arrested in Saudi Arabia in connection with this case to be tried in Istanbul where the crime was committed.

According to daily Hurriyet, Ankara wants these persons to be tried in Turkey because it does not believe that any Saudi investigation into the murder of Khashoggi will be credible.

Meanwhile, press reports are indicating that Turkey is preparing to apply to Interpol for “red notices” to be issued for the arrest of those suspected of involvement in this case, regardless of their rank and position.

It is not surprising that many in Ankara should be hoping that the killing of Khashoggi will force Salman to replace Crown Prince Mohammed bin Salman, whom Turkish officials believe is ultimately responsible for this murder.

Erdogan and his Islamist support base have little love lost for Prince Mohammed, anyway because of issues like his enmity toward the Muslim Brotherhood and his statements in support of moderate Islam.

Turkish Islamists believe the term “moderate Islam” is a concept invented by the West to deprive Muslims of their religious rights and keep them in check.

Whether Prince Mohammed stays or goes, the bottom line is that a serious crisis between Turkey and Saudi Arabia seems to have been averted for the time being after the king’s intervention.

In order for this to be lasting, Riyadh still has to come up with answers on Khashoggi’s murder and show that it is serious about punishing those who have been implicated in this crime.