The Turkish president has fallen quiet since a conversation with the Saudi crown prince, though the team investigating the alleged murder of dissident Saudi journalist Jamal Khashoggi was blocked from searching a well at the consul general's residence. 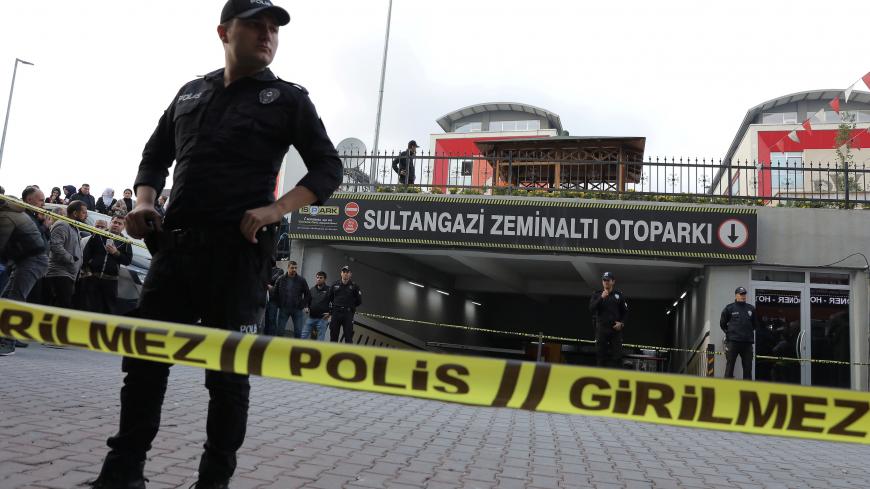 Turkish police officers stand guard at the entrance of a car park where a vehicle belonging to Saudi Arabia's consulate was found, in Istanbul, Turkey, Oct. 22, 2018. - REUTERS/Huseyin Aldemir

There’s the tape, the Apple watch, the bone saw; the claims about the why, where and how Jamal Khashoggi was murdered have been looping for nearly a month now. Yet there is still no sign of the dissident Saudi journalist’s body, which was allegedly dismembered. And even as a Saudi prosecutor declared that Turkey had provided information that his murder was premeditated, he stopped short of confirming that this is what Saudi investigators had themselves concluded. There are few signs that the Saudi authorities are willing to fully cooperate with Ankara, or so Turkish officials say.

Today, Turkish officials leaked claims that a forensic team had not been permitted to search a well in the departed Saudi consul general’s garden, part of an effort to locate Khashoggi’s corpse. They were allowed, however, to draw a water sample.

In a bid to keep up pressure on the Saudis, the Turkish Arab Media Association, of which Khashoggi was a member, organized a protest outside the Saudi Consulate this evening. Yasin Aktay, a close friend of the victim and a prominent Islamist intellectual who was present at the vigil, declared that the case would not be covered up and that Turkish President Recep Tayyip Erdogan was "the biggest guarantor of this." He added, "I believe the [Saudi] king will ensure that justice will be done as the Quran requires." The Washington Post columnist entered the building on Oct. 2 to get documents to wed his Turkish fiancée, never to re-emerge.

Meanwhile, the Istanbul chief prosecutor’s office concluded its interrogation of 38 employees of the Saudi Consulate. They included a chauffeur, a technician and a switchboard operator, the pro-government Yeni Safak reported today. There was no word, though, of their testimonies.

It remains unclear whether the administration of US President Donald Trump will shift its position now that CIA director Gina Haspel, who traveled to Ankara earlier this week, was reportedly given access to a critical audio tape. Turkish officials claim it documents the murder of Khashoggi within the consulate by a team of 15 Saudi security officials allegedly tasked with the job. There is growing pressure from Congress to withhold arms sales to the kingdom and support for its murderous war against Iranian-backed Houthis in Yemen.

Trump has made no secret of his desire to see Crown Prince Mohammed bin Salman absolved of all responsibility. The emerging consensus is that the 33-year-old de facto ruler of the kingdom will survive in spite of the widespread consensus that he was fully aware if not outright responsible for the gruesome proceedings that resulted in his prominent criticizer’s demise.

“When you control so much oil, the hard truth is that your global image ultimately isn’t decisive,” said Omer Taspinar, a professor who lectures on the Middle East at the National Defense University. “The crown prince is not quite out of the woods yet but he will probably weather this crisis,” he told Al-Monitor.

Yesterday, Prince Mohammed telephoned Erdogan, a day after the Turkish leader called for “those responsible” for Khashoggi’s killing to be held to account. There is little love lost between the rival Sunni leaders, who are on opposite sides of Saudi hostility to Qatar and the Muslim Brotherhood. Nonetheless, the Saudi prince breezily declared soon after the conversation that “no wedge” could come between himself, his father King Salman bin Abdul-Aziz Al Saud and Turkey’s powerful president. It's been radio silence on Khashoggi from Erdogan’s palace since then.