The Turkish president shared few new details in his much anticipated public address on the death of Saudi journalist Jamal Khashoggi, but made it clear that Ankara will continue pressure on Riyadh over the case. 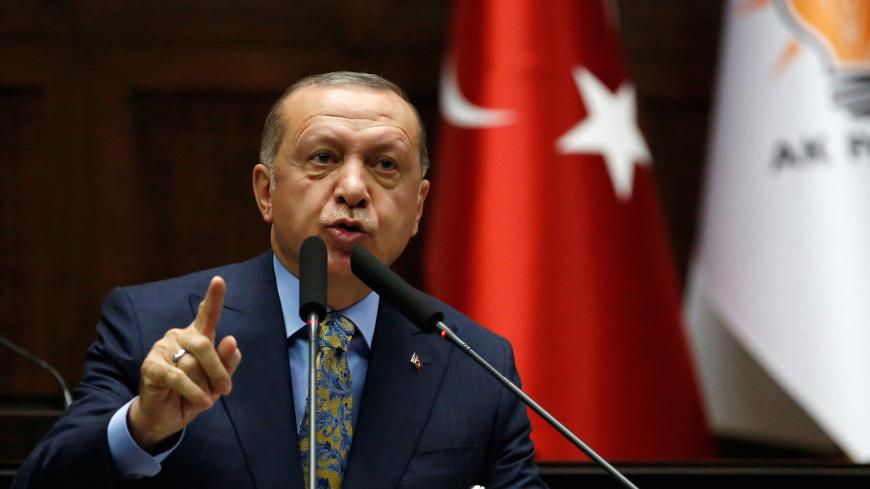 Turkish President Recep Tayyip Erdogan addresses members of parliament from his ruling party during a meeting at the Turkish Parliament in Ankara, Turkey, Oct. 23, 2018. - REUTERS/Tumay Berkin

Turkey’s President Recep Tayyip Erdogan commanded a global audience from Ankara today, addressing for the first time in detail the circumstances surrounding the death of Saudi journalist Jamal Khashoggi at the Saudi Consulate in Istanbul. But the Turkish leader stopped short of accusing any of the kingdom’s leaders by name.

Erdogan, who had riveted the world with pledges to reveal the truth “in all its nakedness” today, asserted that Khashoggi had been killed in a “savage” premeditated murder. “We have strong evidence in our hands that shows the murder wasn’t accidental but was instead the outcome of a planned operation,” Erdogan told members of his ruling Justice and Development Party in a parliamentary address that was broadcast live and translated simultaneously into Arabic and English.

Erdogan went on to describe in detail information that had for the most part already been steadily leaked by Turkish officials to the media since the Washington Post columnist’s disappearance on Oct. 2: that a team of 15 Saudi security officials had flown into Istanbul to carry out the murder and the ensuing coverup. Erdogan said he wanted the perpetrators, who Saudi officials say have been detained, to be tried in a Turkish court of law.

However, dashing expectations, Erdogan made no mention of a much touted audio tape that Turkish officials say proves how Khashoggi was murdered. Its origin is a source of unremitting speculation that Turkey had planted spies inside the Saudi Consulate.

Analysts say that Erdogan’s speech makes it clear that Turkey will continue to apply pressure on the Saudis in a dramatic escalation in the existing regional Sunni power struggle pitting Erdogan and fellow Muslim Brotherhood-oriented leaders, notably the emir of Qatar, against a bloc of Saudi-led powers that includes the United Arab Emirates and Egypt.

The former “draws its power from the people through elections, however flawed,” said Behlul Ozkan, a professor of international relations at Istanbul’s Marmara University.

The latter bloc rules autocratically and feels deeply threatened by the Turkish model, he told Al-Monitor. The rivalry between the blocs burst into the open when Egyptian strongman Abdel Fatthah el-Sisi toppled the democratically elected pro-Muslim Brotherhood President Mohammed Morsi in 2013.

The establishment of a Turkish military base in Qatar and its recent rapprochement with another Gulf sheikdom, Kuwait, marks the first time since 1916, when the Ottomans ruled over much of the Middle East, that Turkey has reached into the Gulf, which the Saudis see as their own backyard, Ozkan noted.

“Erdogan sees this as payback time. He is thinking, ‘They thought they could get rid of me, well they couldn’t,’” said Omer Taspinar, a professor who lectures on the Middle East at the National Defense University. He added of Saudi Crown Prince Mohammed bin Salman, who is commonly called MBS, “MBZ is MBS’ intellectual mentor.”

Still, Erdogan has refrained from openly confronting the Saudis and was at pains to paint Saudi King Salman bin Abdul-Aziz Al Saud in a positive light. The king’s “sincerity” about wanting to get to the bottom of Khashoggi’s death was not under question.

More critically, Erdogan did not unveil a smoking gun that directly implicates the king’s designated successor. The crown prince is widely believed to have ordered Khashoggi’s death. “This leaves MBS wondering what further evidence Turkey actually possesses,” Taspinar told Al-Monitor. By creating the impression it has more incriminating material (and it may well not), “Turkey hopes to create time and momentum for MBS’ enemies inside the kingdom to topple him.”

Khashoggi’s Turkish connections went beyond his emotional entanglement with fiancee Hatice Cengiz, a Turkish researcher on Oman with close ties to pro-Muslim Brotherhood circles in Turkey. Khashoggi, a vocal critic of the crown prince, was part of a Qatari- and Turkish-backed effort to mobilize opposition against him, Taspinar said.

The crown prince was bracing for this moment, and the mass arrests of fellow princes in November last year was a pre-emptive bid to nip any palace coups in the bud. Though his father continues to stick by him, his alleged role in the columnist’s death may have been a step too far.

Erdogan’s address came as CIA director Gina Haspel arrived in Ankara, reportedly to examine Turkey’s evidence. Her arrival is meant to signal that the Trump administration takes the charges that are being indirectly leveled against the Saudi crown prince, President Donald Trump’s favorite Arab royal, seriously. Treasury Secretary Steve Mnuchin's meeting with the crown prince on the eve of a conference to present his vision for the future of the kingdom, a summit that has been shunned by global business and political leaders, has raised many eyebrows. Indeed, Haspel's assignation with Turkish intelligence czar Hakan Fidan could be the CIA’s way of upending the White House’s attempts to shield MBS, Ozkan speculated. “There is a lot of maneuvering going on, but in terms of media messaging, Turkey incontestably has the upper hand.”