Turkey's president reportedly shared a phone call with the Saudi crown prince as information about the murder of a journalist in Saudi Arabia's consulate in Istanbul continues to trickle into the press. 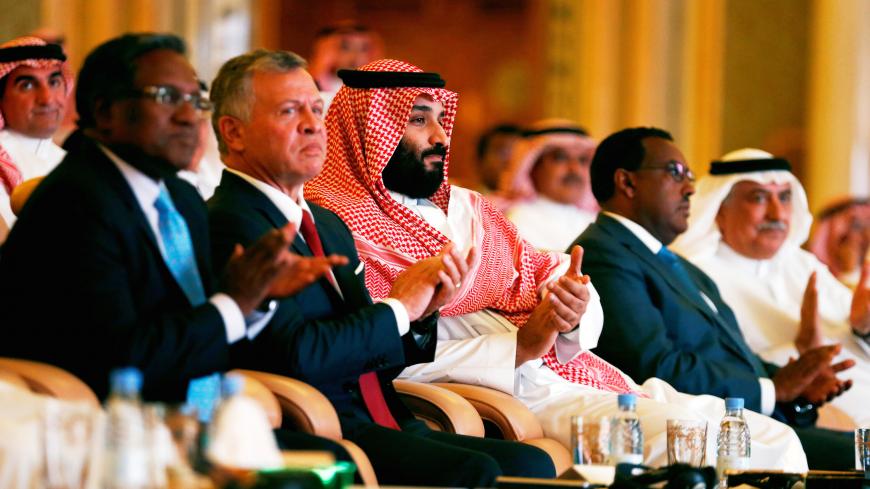 The conversation must have gone well, since the crown prince soon after told a business forum boycotted by international businessmen and politicians, "Many are trying to … drive a wedge between Saudi Arabia and Turkey. … They will not be able to do it as long as there is a King Salman, a Mohammed bin Salman and a President Erdogan."

Khashoggi was a vocal critic of the crown prince's murderous war in Yemen and crackdown on dissent in his columns for the Washington Post. There is widespread consensus that Khashoggi could not have been killed inside the consulate without the prince's prior knowledge. US President Donald Trump, who has shown extreme reluctance to link the prince to the commentator’s death, conceded that point. Trump told the Wall Street Journal yesterday, “He’s running things and so if anybody were going to be [informed], it would be him.”

Today’s phone call was said to have been instigated by the Saudi prince, a sure sign that he wants to staunch the damage caused by the steady flow of Turkish official leaks that have punched holes through Saudi Arabia’s initial claim that Khashoggi left the consulate alive and later that he died in a fistfight. The latest Saudi iteration is that Khashoggi’s death was a rogue operation carried out by renegade security officials that went wrong.

Today’s Turkish leak — footage charting the itinerary of a BMW sedan with diplomatic plates that place it as Saudi — indicates that Saudi officials scouted forest land, presumably to find a suitable place to dump Khashoggi’s remains. His body has yet to be found. Anonymous Turkish officials have consistently claimed they have evidence that it was dismembered and that a team of 15 Saudis dispatched for the job had an electric bone saw in tow.

The New York Times, citing an unnamed Turkish official, reported that Saudi Prince Khalid bin Faisal Al Saud, who secretly met with Erdogan last week in Turkey, had “offered a package of inducements for Turkey to drop the case — including financial aid and investments to help Turkey’s struggling economy and to end a Saudi embargo on Qatar, a Turkish ally.” Erdogan had “angrily rejected” them as a “political bribe.”

It's likely that Prince Mohammed made some fresh offers to Erdogan, who is now clearly in the driver’s seat. Analysts say Turkish asks could include slashing Saudi financial support for Kurdish militants in Syria. But such a move would place it directly at odds with the Trump administration’s newly declared policy of keeping its troops in the Kurdish-controlled zone in eastern and northern Syria for post-Islamic State stabilization and rolling back Iran.

Turkey has not yet disclosed an audio tape that purportedly catalogues the full horror of Khashoggi’s death and possibly even the crown prince’s alleged part in it. Erdogan did not mention the tape in his parliamentary address yesterday. But in a thinly veiled swipe at the crown prince, Erdogan called for “those who gave the order” for Khashoggi’s execution and those who carried it out to all be brought to account.

Meanwhile, it remains unclear whether CIA Director Gina Haspel, who flew to Ankara Monday, reportedly to examine Turkey’s evidence, heard the tape or not. Haspel asked for access to it, reported Reuters, citing four different sources.

Asli Aydintasbas, a senior fellow at the European Council on Foreign Relations, argued, “This is not about money for Erdogan, it's about rebalancing the regional order, clipping bin Salman’s wings and forcing the Trump administration to reassess its strategy of formulating its Middle East policy around the crown prince.”

She told Al-Monitor, “Erdogan likely recognizes that without Trump’s backing and in the absence of a concerted Saudi push to remove him, bin Salman may well survive, albeit with his global image in tatters.”

Erdogan, on the other hand, after years of negative press coverage of his ruthless authoritarianism, has captured the moral high ground. Aydintasbas noted that the silver lining, however faint, may be that Erdogan could seize the moment to reclaim the mantle of the Middle East’s great reformer, which he donned when his ruling Justice and Development Party shot to power 16 years ago. An immediate step would be to free prominent peace activist and philanthropist Osman Kavala, who has been sitting in jail one week short of a year on trumped-up terror charges. The plight of Kavala, who has yet to be indicted, and more than a hundred Turkish journalists languishing in prison on similarly thin charges cast a dark shadow over Turkey’s championing of Khashoggi.