Turkey’s political crisis goes from bad to worse as the country prepares to vote in municipal elections on March 30. 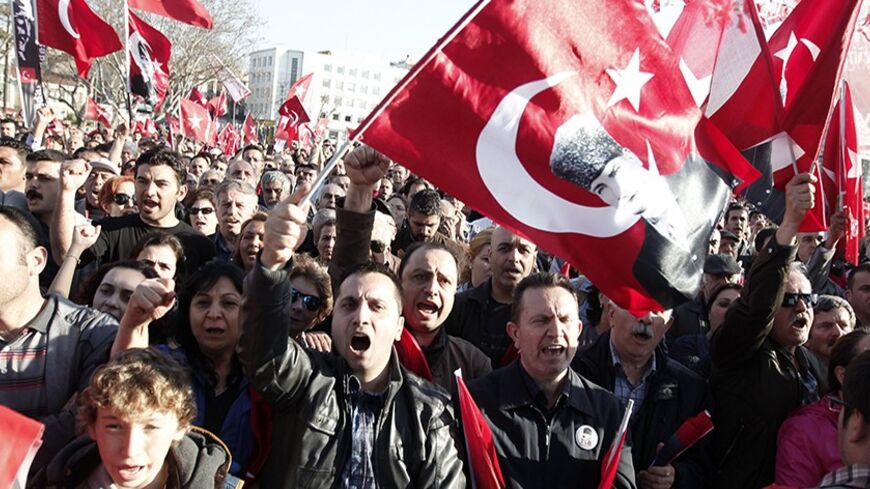 Fule identifies himself on Twitter, stating, “I am Commissioner responsible for the enlargement of the EU and for the policy towards our neighbours. This account is serviced by me and my team. Brussels, European Commission.”

Neelie Kross was quick to get on board at Twitter, as well. Here, interestingly, is how she introduces herself: “I am Vice President of the @EU_Commission leading @DigitalAgendaEU and #ConnectedContinent plans. I am fighting like hell for a EU you can believe in. Global (based in Brussels).”

She then followed up the above tweet with a statement: “Another desperate and depressing move in #Turkey. I support all supporters of real freedom & democracy.”

Yes. In less than a week, Turkey once again stirred concerns in the Western democratic world with a ban on YouTube following the Twitter ban. There were, however, a few good signs. The Ankara Administrative Court issued a stay against the ban, and there was hope that the ban might actually be lifted.

Turkey’s Twitter ban had reached the point where it was going to cause major headaches for Turkey in the international arena. The United States called on the Organization for Security and Co-operation in Europe (OSCE) to adopt a position against Turkey because of this ban.

Daniel B. Baer, the permanent US representative to the OSCE, expressed the United States' concerns over Ankara's ban on access to such social media sites as Twitter at a March 27 meeting of ambassadors of OSCE member states. As the OSCE, on the basis of a US initiative, was discussing Turkey’s Twitter ban, news of the move against YouTube reached Turkey’s Western allies. The word is that Facebook is next.

Although the US reaction might have appeared to be a bit late, because of the time difference, Washington nevertheless reacted swiftly to the new ban. Samantha Power, US permanent representative to the United Nations and a close friend and former adviser of President Barack Obama, was the first to react. She tweeted:

The White House issued a statement delivered by National Security Council spokeswoman Laura Lucas Magnuson: “The United States is deeply concerned that the Turkish government has now twice in recent days blocked its citizens’ access to basic communication tools. As we have said, we oppose these restrictions on the Turkish people’s access to information and support the people of Turkey in their calls to restore full access to blocked technologies.”

Naturally, the Turks who last week managed to find ways to bypass the Twitter ban quickly got around the YouTube ban as well. One of the oldest newspapers in the country, the anti-government daily Cumhuriyet, openly declared on its website that it would not be abiding by the ban. The daily Karsi, which began publishing three weeks ago and opposes the government, declared its intention to print the text of the recording that led to the ban.

The YouTube ban followed a scandal rarely seen in Turkey’s history. The Twitter ban was imposed because the site was used to spread alleged information about corruption allegations against members of the government. Prime Minister Recep Tayyip Erdogan, despite his best effort, has been unable to impede the revelations.

The YouTube ban followed the disclosure of the contents of a meeting in the office of Foreign Minister Ahmet Davutoglu in which he along with Foreign Ministry Undersecretary Feridun Sinirlioglu, the deputy chief of the General Staff, Gen. Yasar Guler, and the head of Turkish national intelligence (MIT), Hakan Fidan — considered Erdogan's right-hand man and the real “number two” in the regime — discussed finding a pretext to intervene militarily in Syria.

The meeting was convened after threats by the Islamic State of Iraq and al-Sham (ISIS) to lay siege to the Tomb of Suleiman Shah, the grandfather of Osman, the founder of the Ottoman Empire. ISIS had demanded the withdrawal of some two dozen soldiers guarding this enclave, which flies the Turkish flag, outside Turkey near Raqqa. The Tomb of Suleiman Shah was designated Turkish territory in a treaty with France, which at the time controlled Syria, when demarcating today’s Turkey-Syria border. A detachment of 20 to 28 Turkish soldiers is permanently stationed there as guards.

The leaked recording of the four officials discussing this highly sensitive issue contains a number of statements that will embarrass Turkey. Among the more interesting ones was the intelligence czar Fidan asserting that he could send four men into Syria and have them fire eight missiles into an empty field in Turkey to create a pretext. He could also stage an attack against the Tomb of Suleiman Shah toward the same end. Davutoglu said that the prime minister had told them that they could exploit the current situation.

The meeting participants were so shocked by the revelation of their discussion via YouTube that they did not bother to claim that it was fabricated. Davutoglu attempted to deflect, stating, “The objective here is to show Turkey as weak. This is a declaration of war against Turkey.” He called the recordings “treason against homeland.”

Erdogan, who learned of the leak while campaigning in southeast Turkey, was enraged. He referred to it in Diyarbakir, declaring, “This is immoral. This is lewdness. This is contemptible. We will enter their lairs.” Subsequently, in addition to the YouTube ban, the media were banned from reporting on the contents of the recordings.

Although, the YouTube ban was easily bypassed, the situation was nonetheless bizarre. The entire world — intelligence services worldwide, Turkish expatriates and anyone else interested — could easily learn what was discussed at the high-level meeting on Syria, but Turks in their own country were being denied local access to developments that concerned them more than anyone else.

The bugging of the meeting is no doubt humiliating for Turkey, but as usual, those responsible for the humiliation will not be held accountable. Instead, the Turkish people are being treated as if they were guilty of something.

The UN High Commissioner for Human Rights based in Geneva had called on Turkey on March 25 to lift the ban on Twitter, noting that it was incompatible with Turkey’s obligations to international human rights. Farhan Haq, the deputy spokesman of the UN secretary-general, issued a statement on March 27 in New York in which he said that the UN position on Syria is clear, its diplomatic efforts on Syria are well-known and it opposes further militarization of the conflict. He added that the UN encourages all countries, especially those in the region, to help stop the fighting and try to bring the government and opposition to the negotiation table. Reminded that Turkey had banned YouTube and Twitter, Haq said the statement issued in Geneva was valid and that he would not comment further.

The foreign media gave extensive coverage to the bans. In Germany, the dailies Bild and Die Zeit and the magazine Der Spiegel all covered related developments in-depth. The Financial Times ran a banner headline, “YouTube blocked in Turkish crackdown.”

Erdogan and associates continued with their established practice of blaming the Gulen movement for its troubles, accusing it of bugging the “Syria war planning" meeting and for its disclosure via the Internet. They labeled the incident as an “espionage offensive,” signaling the possibility of a witch hunt after the March 30 municipal elections. The Twitter and YouTube bans are seen as harbingers of this coming hunt. According to rumors, at least 2,000 people will be detained. Fethullah Gulen and his followers, in this case, are seen as too easy a scapegoat.

Turkey — rocked by a string of unprecedented scandals and saddled with a prime minister on a march toward authoritarianism — is being destabilized. Given the turn of events, the March elections might not be a remedy to Turkey's ailments.